Years ago someone–I’m not sure who–raved to me about FUDGE. It didn’t make much of an impression over “just another rules-light system with funky dice“.

Much later, everyone started to get into FATE, which used FUDGE’s dice mechanic. It also uses Aspects and Fate Points. I bought Spirit of the Century and promptly failed to run it, but from my cursory glance it was “just another rules light system with player narrative control, poker chips and funky dice”.

Pulp doesn’t do much for me, which is probably why SotC has been sitting unloved all this time in my collection. Still there are a lot of very interesting games powered by FATE… and it seems, all different kinds of FATE. The transhumanist game Nova Praxis (and its parent Strands of FATE) deviates furthest (I believe) with a 1d6-1d6 mechanic1 instead of FUDGE dice, as well as attributes. EDIT: Mike McConnell has added a comment below to clarify–he kindly provides this link with handy information on how Nova Praxis is like both SoF and FC. Also, 1d6-1d6 is optional.

FATE Core (by Evil Hat) on the other hand has no attributes, which is something I like very much–everyone is assumed to be “average” unless they have a trait that tells you they’re better than average. 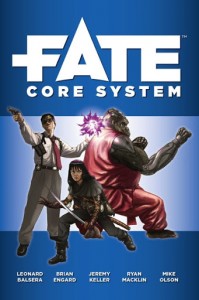 What made me give FATE a second glance? First, the price is right–“pay what you want” for the pdf. Second, I have a soft spot for generic mechanics. Third, great reviews–saying the game has been streamlined and clarified. Just the thing to attract an obstinate GM like Yours Truly.

I’ve had the pdf for only a few hours, so these are only my first impressions–but there’s a lot I like about FATE Core.

What about magic and supers? That’s where Extras come in. The Extras chapter is the last in the book before the character sheets and is pretty slim–it’s a toolkit rather than a laundry list of spells and powers. There’s a nice section on how to apply extras to characters–for example if an extra creates a “new context for action” then it should be a skill (and therefore affects the setting); if it influences the story it should be an aspect, and so on. Extras have Permissions (i.e. justification) and Costs associated, which sounds like the Wild Talents philosophy only much, much simpler to implement. No doubt the forthcoming games based on FATE Core will see pre-made lists of powers, vehicles and NPCs. I’m happy that the core book isn’t cluttered with such ephemera.

Some systems are right for certain kinds of worlds and certain kinds of play; but presenting a system outside the context of a world is a true test of its coherence and robustness. FATE Core has clicked for me in a way the Savage Worlds Explorer Edition hasn’t, and I think that’s partly to do with the way the latter includes list after list of powers and effects. FATE Core appears to focus more on how the game should be played and crucially how it should be planned by the GM. The authors get a gold star for that.

The one thing I’m less certain of is how the players will react. This system seems to demand the PCs be proactive and not passive–a goal all games should achieve, but in this case the Aspect and Fate Point economy requires a set of behaviours that aren’t common at most of the games we play, even if they are easy to pick up.

FATE Core is a thing of beauty, and a bargain at that. It’s a very different, single-minded and coherent game with excellent support for the GM and a very clear message about its intentions. It is a pulpy, action-y game about remarkable characters doing remarkable things–the end result is probably similar to Savage Worlds or Cinematic Unisystem (each having their own Drama Points/Bennies system), although procedurally it’s very different. It’s probably not suitable for survival horror or gritty simulation, but it doesn’t pretend to be. I doubt it will displace Everway or Unisystem in my affections, but I am certain I’ll run it in the near future.

1. I originally had this throwaway remark about Strands of Fate:

I’m not sure why you’d pick an Aspect-driven game and clutter it up with traditional RPG tropes like attributes, but I suppose it does ease the transition from the traditional RPG arena into the new school. And don’t get me started about the black die/white die mechanic–that was one thing I couldn’t stand about Feng Shui.

p>SoF is reviewed by GameGeeks and on RPGnet, and that’s the source of my first impression–and it’s unlikely I’m going to buy, let alone attempt to sell a game with 12 attributes to my players, so that’s the extent of my opinion. But read the reviews, the reviewers say nice things–I’m sure it’s a good system, it’s just not likely to cross my path.

I do very much like the look of Nova Praxis’ “augmented pdf” although until now I’d assumed it was a solid SoF game (the preview doesn’t tell me enough to the contrary). Since that system doesn’t appeal, and I don’t need another transhuman game, I’ve been vacilating about a purchase. We shall see, I may just buy it to look at the lovely art.