Eleven-year-old me did not appreciate Traveller, my first RPG. At that age science fiction was about travelling in the X-Wing at incredible speeds, blowing up Death Stars, and generally swashbuckling one’s way across the universe. It was not about the things I found in the Traveller Starter Edition, which included: 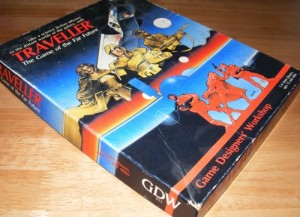 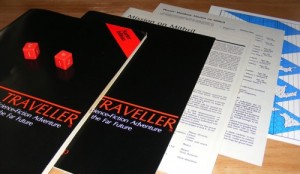 This posed a big problem. I mean, I got how to play just fine–you land on an uninhabited alien planet, stand and stare at 50,000 year old ziggurats for a while before breaking into them in the hope of getting enough alien stuff to offset your crippling mortgage. But how the heck does that qualify as “adventure”? The 3-page Referee’s guide in the back of the rules booklet (64 pages, woohoo!) wasn’t terribly helpful to my young self–not that it’s badly written, it just uses terminology like Encounters and Patrons and Subsectors and all sorts. There’s a steep learning curve and the sense that Marc Miller has no time for fools–if you don’t get how to play, you’re probably not smart enough for this game.

The lightbulb moment came a few years later when (having gained GM experience) I used Traveller to run the first few episodes of Blake’s Seven as a game. Suddenly the hard science, the dangers of just getting from point a to point b, and the essentially human story of Traveller made sense. Even though D&D was probably a better game for a kid with its powers and telegraphed characters, it did not spark my imagination in the way this game did. I started to think about logic and realism and people living their daily lives in an alien environment.

I don’t know if later booklets improve on the woeful lack of Ref advice since I never bought any other books–I suspect the same “just get on with exploring the next planet and paying off the bank loan” attitude prevails, even though I know there are different human races and aliens and even some metaplot. Still, Traveller is far from a bad game. On the contrary it’s a good toolkit. I don’t value setting or metaplot but I do value transparency of system that lets me run the games I want to run. 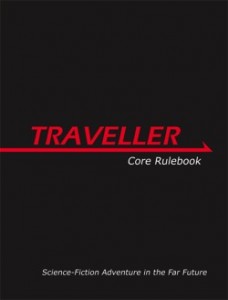 I picked up the Mongoose Traveller pdf in a recent DriveThruRPG sale. If you don’t know, there have been many versions of the game (including d20 and GURPS editions). Mongoose Traveller is a return (and update) to my original, “Classic Traveller”. If it had been an entirely new system I don’t think I’d have bothered, but the classic “roll 2d6 and add mods, score 8+” system has such a practical simplicity to it, I keep coming back. Until now though I hadn’t the patience to wade through the dense text in my old edition long enough to plan a game.

The one thing I’m not so keen on in the Mongoose edition is art–instead of the gritty but inspiring b&w stuff in my original it’s mostly second-rate cartoons that emulate 2000AD. Maybe they did that on purpose given the Judge Dredd and Strontium Dog setting books. Still, I can forgive that because the layout is superb. If you’re going to reprint and revise a classic game, make it easy to read.

The content is pretty much the same, but there’s a big concession towards modern audiences–a long Career chapter at the start with each career given its own two-page spread. In the original, you got a single block of text (although I believe each career had a dedicated booklet, so that may be a concession in my Starter Edition).

Maybe the other thing I don’t like is the character sheet. I guess it’s an improvement on the original, but I liked how the characteristics in Classic were a six-digit hexadecimal code and nothing else–yet another relic from Miller’s economical style. 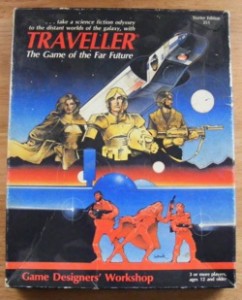 Speaking of Miller, he’s now successfully kickstarted Traveller 5. It’s a monstrous book with an allegedly completely rewritten system involving rolling a number of d6 equal to the difficulty level. Hmm, that reminds me of something. I’m sure that to hardcore fans T5 is everthing they were hoping for, but plowing through a New Big Black Book filled with Miller’s terse instructions is not something I relish.

Mongoose Traveller is a surprise–bought as a curiosity, it’s transformed my appreciation of Classic Traveller from something I tried to run once, to something I would be confident in dropping into a one-off game. There’s a lot to the system, but Mongoose’s revision shows that no single component is difficult to implement, and it covers all the areas like world building, space ships and so on. True to the original, refereeing advice is non-existant–if it’s covered anywhere it will be in the genre RPGs like Dredd and 2300AD that require this book as its core. I don’t need those, so this toolkit will serve me just fine.