The party damage magnet is more than just a tank who soaks up punishment–they soak up hits for the team. It can be unintentional, when an inappropriate target (say, the party MU) is selected over and again at random. That can be funny too, at least for one session and as long as no-one actually loses their PC.

Really though the party tank should always be the damage magnet. Not only does it make tactical sense, it’s the role the player has signed up for–a protector of the other party members, and a tough character.

This is where Aggro comes in. MMORPGs and CRPGs use aggro (aka Threat, Hate) to prioritise which monster attacks which PC–and in addition to soaking up hits the Tank often has aggro-drawing abilities (such as taunts) to draw attention away from the vulnerable healers/buffers and high damage-per-second characters.

However taunting often means something different in tabletop games. Sometimes it’s an effect that makes an enemy attack blindly, so the aggro-drawing is implied — but other times it’s a mechanism to mentally disorder the opponent with quips and insults, so the user has an advantage against the target of the taunt (this is a feature of swashbuckling games like 7th Sea, I believe). Overall a taunt (like a lot of RPG powers) has a focus on the one-to-one relationship between fighter and enemy, rather than the many-to-many relationship of party (with its strong and weak members) to enemy unit.1

Let’s consider aggro as a global condition, applying to all PCs all the time–as is the case in WoW.

We know RPGs revolve around conflict and tension, but conflict doesn’t happen for its own sake (often). Conflict usually happens because the PCs have inserted themselves into a dangerous situation (physical and/or social) for some kind of gain.

The most obvious example, with physical conflict. Enemies target the party according to the perceived threat or tactical advantage; the tank steps in to take the heat off the weaker party member.2

In this case the characters are in a location they shouldn’t be. If it’s a rough underworld dive then the ones who don’t fit in may pick up aggro from the locals. In that case, the threat could be discovery and could turn to physical violence.

Alternatively there are social situations where there is no physical threat, but the characters risk either ridicule, or getting detected before they get their objective (say they’re a bunch of thieves infiltrating a society ball). At the ball the social movers and shakers will spot someone out of place and may question them, humiliate them, or have them ejected.

If the risk is ridicule then the system needs to support some kind of “social hit points”. Examples might be Lace and Steel’s Self Image, or a variable Status trait.

This is the veteran scout escorting city folk through the wilderness trope. The city folk are already at a threat disadvantage compared to the scout; they are perceived as “weak” by the environment, and invariably will be picked off first by any threat that comes their way. Maybe the worst that happens is being stung by a bee or rubbing up against some poison ivy3; or maybe they get picked off by predators.

In all cases the city folk are assumed to be under the scout’s protection; while they’re with him, he takes some of their aggro onto himself (also maybe there’s a limit to how many he can protect; now you’ve got a need for extra guides).

To implement this plan, we need some measures.

There’s still some work to be done with scale and what happens with escalation (e.g. escalating from a social conflict to a physical one). Potentially this could be wrapped into the location-focused City Accelerator tool, using Domain as a Base Aggro and maybe Tension as some kind of modifier.

4. More Than One Kind of Aggro

Supplemental to the above, consider a trad D&D party going up against a Boss plus Minions. 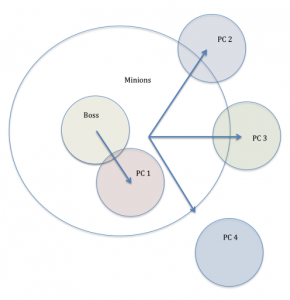 In MMORPGs there’s a concept of a radius of aggro. For computer games managing the actual distance from the enemy is part of the game, but mostly we take distance management on trust in tabletop games (unless you play with minis). Still, the concept of an aggro radius is very important, as are the tactical decisions that go along with it. Does the PC have to voluntarily place themselves within the radius, or could they find themselves within an aggro radius by accident (say, by surprise)?

Then there’s the case of how you manage boss fights. Boss fights should present both a “boss problem” and a “minion problem”. Consider the diagram above:

There’s a case for tracking both Boss aggro and Minion aggro. It shouldn’t be hard; you can have red aggro tokens for regular minions, and black ones for the Boss. There’s also an interesting condition that to attack the Boss PC1 must attract aggro from minions (let’s say the party are trying to take down a crime boss in their lair).

That makes PCs 2 and 3’s job very important. They have to tank all the Minion aggro while PC 1 gets an uninterrupted crack at the Boss. This is the classic “I’ll hold them off, you get Dr Evil!” move.

(Meanwhile, what’s PC 4 doing? Are they a sniper moving into position, or a coward hiding in the toilets?)

And this is clearly just another way to achieve the same result: exciting, dramatic and climactic scenes. Still, by telegraphing threat the GM may get another lever to force characters to action. We shall see, eh?

2. Normally, aggro grants the players a tactical privilege–that of targeting the enemy’s powerful-but-vulnerable dps units (e.g. an enemy MU cranking out fireballs) but denying the GM the chance to do the same thing to the party. And with good reason: PC on enemy aggro needs to be at (almost) all times in the control of the players, just like every other decision they make for their character. Mind control on PCs is rarely acceptable.

« Playlist: Stole It From A Snowman
Surly Cross Check »