Funny word, nostalgia. It’s a goofy word. But then I was pretty goofy as a teen, too.

Anyway… for the past 12 months or so, I’ve been rediscovering games of my youth (some in new forms). Traveller was my first rpg. Basic D&D was my second. I never really got on with RuneQuest–I loved the differences from D&D but somehow the gamers I knocked around with back then never took to it. After that I somehow got sidetracked with Rifts… and then regained my footing with Vampire. 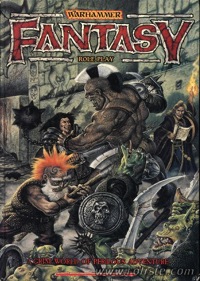 WFRP has three iterations, but the one I’m familiar with is 1e. 2e is sometimes described as “WFRP rewritten by americans” and it looks a bit sanitised to me, although the mechanistic changes are mostly consolidation and streamlining–always a good thing. (I have no idea about 3e other than it comes in a big box and has lots of cards–clearly FFG are trying to catch the boardgames market.)

WFRP has a reputation for a “grim and perilous” USP. This has drawn tacit comparisons with Dungeon Crawl Classics (lethal character funnel) and Lamentations of the Flame Princess (fantasy renaissance feel)–and I strongly feel those comparisons are from people with only the most superficial appreciation of WFRP. It probably helps if you grew up with the first series of Blackadder, but anyway–WFRP is not a meat grinder full of syphilitic peasants wading through turds.

What WFRP is, is a true alternative to its contemporaries–the US offerings of D&D and RQ. Not just in look and feel (system matters, but it’s not hard to insert the warpstone, chaos magic and faux renaissance into a generic fantasy game) but also mechanistically. WFRP introduced some innovations that have largely been forgotten in modern games.

There area a few ways games handle the “career” of a character:

WFRP uses the “package” method. Often this approach uses unique advantages or skills (to do with rank, supernatural ability, etc). Still, these packages are usually static after time in and the method reverts to the second approach (i.e. no career). WFRP manages to place the character within a lifepath rather than at the end of it, and that’s a neat thing.

Additionally the careers embed the flavour of the setting in character from day one without being nearly so restrictive as character classes. The careers system is a nice way for players to differentiate between who they are and what they can do.

Porting a careers system to another game may be hard work, however. WFRP careers is good for playing WFRP in the Old World. I don’t know if FFG’s 40k offerings have analogous systems. Still, you could in theory file the names off the careers and reconfigure the list for, say, the Eternal Champion setting.

On the face of it, the WFRP stat block is “just” a percentile system with some other dice rolled for damage, etc.

WFRP has its roots in WFB, which (being a wargame) relies on terse stat blocks with very specific functions. Translate that to a roleplaying game and you get characters who are rated for % function in a number of rather specific common activities–like Leadership and Dexterity and Weapon Skill.

Just think about that for a moment. Almost every other game either has such figures derived from the stat block (e.g. attribute bonuses in D&D, base competence in GURPS, the prevelance of Skill + Stat for almost all games since Vampire), totally independent of the stat block (BRP), or broadly abstracted (minimalist games like Everway, Summerland, etc).

This has a couple of interesting effects. Firstly this is going to sound dumb, but… the stat block reads left to right in WFRP 1e. Not up and down. That means there’s no implied priority of stats. It’s an axis. Physical abilities on the left, Mental on the right, in the middle are the awkward hand-eye coordination traits that aren’t fully mental or physical. I like that a lot. It also means that if you wanted to rip it off you just had to insert or remove traits that worked for you; the integrity of the stat line is preserved.

Having your numbers in a line reduces the seek time a player takes to look at their character sheet and find a number. Any modern game with appreciable crunch at the very least requires the player to scan their sheet up and down, and usually (thanks to Vampires stat+skill legacy) hunt for two numbers and add them together. These problems can be minimised by good sheet design (and player familiarity) but they’re still intrinsic to the system.

Once all actions of a certain type default to a single percentage (adjusted by circumstance and negotiated bonus) the skills become permissions to act in certain ways–their more like proficiencies than skills. For example, I like the way Weapon Skill covers Ordinary weapons (swords, etc) but something exotic like firearms or cavalry requires a proficiency.

The system doesn’t make sense sometimes–surely a high Fellowship implies a Charm or Carouse skill, so why are these separate skills? That’s easy to fix with list of basic skills (similar to Mongoose Runequest). Add those and you have a system that should be fairly quick to teach.

Firstly, Fate points. I don’t know if WFRP invented Fate points (as opposed to FATE points) but it’s a cool mechanism. It includes resource management (on the player side) with reward mechanism (on GM side) and allows one to “tune” the game between gritty and pulp (a common notion for Savage Worlds, I understand).

There’s not much else to say about WFRP’s combat except that it’s straightforward and easy to see what’s going on–but that’s what you’d expect from a wargame derived RPG, eh? Still, I do want to mention the Wounds system. The conceit of

doesn’t seem revolutionary, but it’s notable for borrowing something that worked well in RQ (armour subtracts damage) and making the calculation as simple as possible. S, T and W usually fall in single digits–but running out of Wounds doesn’t mean death, just that you take Criticals from now on. Yes, there is the problem of Naked Dwarf Syndrome but otherwise damage is easy to work out, and the transparency of the maths is retained.

(As I recall the system did melee criticals well, but missiles weren’t given the same treatment. That’s easily fixed.)

p>There are a few things I don’t like in WFRP. I don’t like how Skills and Talents have been separated in 2e–I don’t see the point. I haven’t remarked on the magic because from what I remember it was a bit lacklustre.

I can see a lot of potential in combining RuneQuest and WFRP styles of character record–keep the list of skills, default to a common % based stat block and bypass those abstract stats entirely. Porting an entire Career system over to your homebrew fantasy world will be hard work–and in theory the Career system in WFRP is the source of game balance, but in practice I found it to be pretty random as to whether you got someone worthwhile or useless. As for magic, RQ and Elric! have different systems coming out of their ears–although Exalted Charms might be a good fit, too.