Terry Pratchett’s Pyramids came earlier in my reading than Gene Wolfe’s Book of the New Sun, but if I had to pick a name for a new shade of black ink I’d choose fuligin.

There are inks that claim to be the blackest. Are any of them truly black? Well, not in my collection. Black is funny stuff — it can shade to the blue, or the green, or the brown or red. This is why you have to be careful when mixing inks on your own, because more often than not the result will be “kinda brownish” (a la multicoloured reflec armour in Paranoia) due to interactions of the undertones in different components.1

If you go for those minutiae, black and grey inks are interesting. Since the ageing goth in me would rather use black than blue for business (and shading towards green), I care about those details. I scanned four inks: 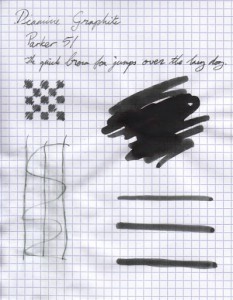 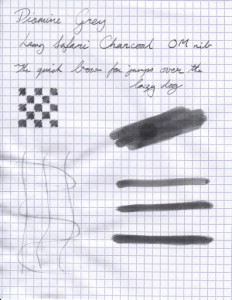 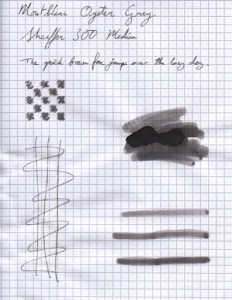 I’ve tried to show them in order of dark to light, but it’s not easy to compare. Also inks behave differently in different pens, and the Parker 51 was writing a bit dry (I later cleaned it extensively — there must have been some ink clogs because it’s wetter now).

p>Both the Diamine and Montblanc greys are a bit dry; the other two feel lovely to write with, lubricate well and flow nicely. Much as I like the Montblanc for colour and funky bottle, it’s more than twice the price of the Diamine inks. The Graphite stands out for colour, although the greys will look better on cream paper. They all have a fair amount of water resistance, but the Graphite is really obviously green when wet.