I was never much of a player of CCGs. I have a bunch of Magic cards, some Battletech cards and some Netrunner sets gathering dust (metaphorically speaking; they’re all in silly deck protectors).

I liked looking at Magic cards and imagining the worlds behind them. I particularly liked the feel of some of the early sets like Ice Age and Homelands, but eventually I grew out of my card fetish (well, almost — I still collect a few fantasy art card sets). Being actually bad at playing MtG didn’t help, of course.

I’m also a fan of Clive Barker, and for years I fancied getting my hands on his Imajica CCG. Well, thanks to a certain auction site: 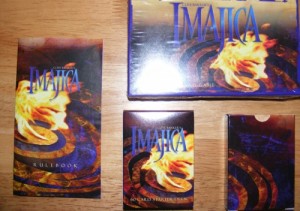 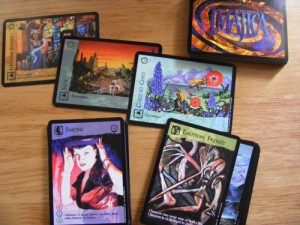 I’ve not had long to digest the rules (not that I really care, I’ll probably never play them, just paw them) but my first impressions are:

Who knows if it’s any good? It’s a shame that the game was cancelled so quickly, but it was probably inevitable. I think it probably could be “better than MtG”, but we’ll never know. For now I’m happy to have a cheap copy. Hopefully some of the cards will have art by Barker himself.