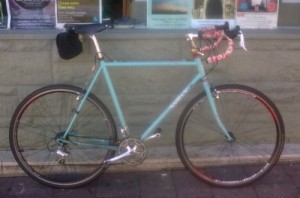 Excuse the fuzz-tastic phone pic. This is my Surly Cross-Check, 58cm in robin’s egg blue (a 2011 colour I think) which I took for a ride early this morning.

This is kind of the bike I wish I’d bought more than 10 years ago when I started riding to work. It doesn’t look like much, but it’s designed for multiple duties on or off road, fixed or single speed, mudguards or naked, loaded or unloaded. Unlike a hybrid though it’s not designed to be boring, and it isn’t. It does look a bit goofy the way I’ve set it up, thanks to the short head tube and massive stack of spacers. For an alloy steerer that probably wouldn’t be wise but since this is steel, and the steerer is particularly heavy steel, it can take it. It seems a lot of people run their Cross Checks that way if you look on flickr.

Anyway, I won’t bore you with all the bikes I’ve owned in that time, but I would like to reflect on a few lessons I’ve learned over the years:

Of course when I bought my first bike I did’t have a grand to drop on a new bike, so the hybrid was wallet-friendly. Still I spent too much on Bike #2. From then on I just built up my own frames.

So, yeah. The Surly Cross Check. Great frame, popular, versatile, recommended unless you’re doing proper mountain biking or proper racing. Only thing I would say is that while the frames are great the parts usually break for me (seat clamp, dropout adjusters, and an old Surly Tugnut broke in record time).

Just for fun, these are some of the bits I have on the bike that are worth mentioning:

The geared bits aren’t worth mentioning since they’re hard to find.