Yesterday I took a trip over to Milton Keynes to attend the morning slot of Concrete Cow in glorious Wolverton. It was pretty much what I expected — a bunch of ageing goths and rockers in a town hall fighting over the sign-up sheets and playing a mixture of traditional and indie games. Leisure Games had a stall (where I picked up a hard copy of A|State, woo!) and I was surprised to see all the traditional titles (Star Wars, Cthulhu) stacked in plastic crates while the main display was devoted to the indie darlings of the rpg world (Dogs in the Vineyard, Lacuna, etc). I don’t know whether there was a conscious push for indie published games (a good thing!) or if those are what con attendees want to buy these days. It makes sense that the indie scene would benefit from the RPG Con circuit as a distribution channel.

I could only play one game, and missed the free slots for Ribbon Drive — so I settled on Barbarians of Lemuria1, specifically its Dicey Tales (1930’s pulp) incarnation. 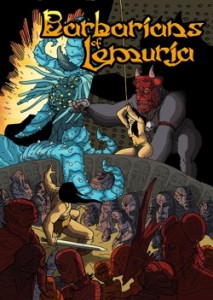 BoL occupies the same territory as Savage Worlds, and not only for the pulp connotations2. BoL has relatively few very broad skills for both combat and non-combat, and tuning character generally comes by way of Boons (and Flaws) — much in the way that SW uses Special Abilities. I feel BoL is easier to learn, however. It operates much more like a true light RPG than a skirmish wargame.

Task resolution is the ubiquitous Stat + Skill + Dice Roll, a disease the RPG world caught from Storyteller and hasn’t really shaken yet. Still, it’s intuitive and at least the dice roll is easy to grok — 2d6, with crits on double six and fumbles on snake eyes. The system is designed for pulp action with a critical success taking out a number of “rabble” (i.e. mooks) equal to the damage roll. There are Hero Points providing re-rolls and “twists of fate” (a la Cinematic Unisystem).

The target number in BoL is 9, which means you need a +2 advantage to break the 50% barrier for success.3 I made the mistake of running a balanced character instead of min/maxing, and failed quite a few routine tasks. In fact this is a game that benefits from both min/maxing and stat and boon synergy — and woe betide anyone who gets it wrong. Boons and Flaws don’t always give linear bonuses or penalties, they may also invoke an additional rolled die — for a Boon you get to keep the highest two of the three dice, for a Flaw you must discard the highest die rolled. Owing to the pass threshold of 9 a flaw will more often than not cripple an attempt to use a skill, even if the user is otherwise very capable. Boons and Flaws that work this way will tend to trump all but the most aggressively munchkin’d builds.

The other notable thing about BoL is the Careers system — unlike WFRP’s careers which are just a permissions system for skill acquisition, BoL’s Careers are broad-based skills in themselves, to be applied in non-combat situations — and the applicability of the career comes down to negotiation with the GM.

However a lot of basic tasks (e.g. sneaking) are so generic that they fall under a wide range of careers anyway. The careers system is more about giving the player an in-character perspective to hang their negotiation on than the usual description of permissions we’re used to from GURPS and the like. This obviates the need to have a list of skills, though — which is a good thing.

Careers also don’t apply to combat — no matter how good a gladiator you are, you don’t get a bonus to actual fighting based on your career. I have no issue with this as a game rule, but it’s not intuitive and tripped the players up a couple of times. Generally

Still, it’s the summing two attributes that I object to most and if I’m going to complain about BoL it can get in line behind Storyteller, ORE, Unisystem and the others.

Would I buy BoL? Maybe, when the Mythic version appears. It would probably do a better job of one-shot fantasy than D&D, or BRP, or any of the other heavyweights like GURPS. It probably even has an edge over Cinematic Unisystem with the relatively small number of stats, careers and boons while retaining the former’s Drama Points. Combat was extremely quick to run. Still if I were playing long term and wanted something with hero/drama/poker chips and negotiated skills, I might choose something a little more abstract like FATE Core. As it is BoL fills its niche nicely.

3. I had the same problem I sometimes have with Apocalypse World — due to the 2d6 probability curve to reliably succeed you need a high investment in your stat. OTOH the AW credo is it’s good to fail, because the GM then makes his or her own move. In BoL a failure is usually you just don’t get what you want, and the GM needs to interpret the consequences.