The Cronenberg Project opens on November 1st of this year, celebrating “all things Cronenberg”. Unfortunately it’s in Toronto, but there’s a virtual exhibition.

Cronenberg donated several props to the Toronto Film Festival — including the Clark Nova from Naked Lunch, which opened the press conference. 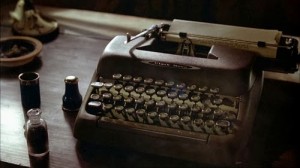 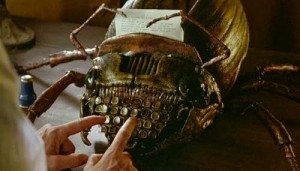 Re-watching Naked Lunch I noticed Optimum’s little promotional booklet of their other films — and was surprised to find Malcolm Tucker: 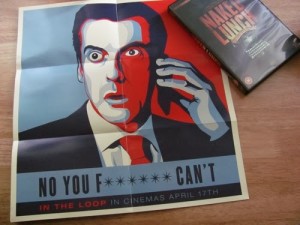 Like all Cronenberg films Naked Lunch was scored by Howard Shore — and I’m torn between it and his score for Crash as my all-time favourite.

I could talk about Burrough’s own recordings, which include Dead City Radio, his readings for  Giorno Poetry Systems and the fantastic Spare Ass Annie and Other Tales (with the Disposable Heroes of Hiphoprisy). But I just found this recording of Frank Zappa reading “The Talking Asshole”:

Since I’m on youtube and in a Burroughs mood, here’s Bomb the Bass’s Bug Power Dust:

Did you get all of it? The lyrics are easier to hear on the downtempo mix from the K&D Sessions.

Anyway. I also found this fantastic Beastiemix of Root Down. It’s something like mix number 3728:

And talking about the Beastie Boys:

…yeah. These must be the symptoms of withdrawal from a substance that doesn’t really exist.