Back in February I talked about the review copy of the Annotated Sorcerer I received for backing the Kickstarter.

The full versions, with completed art and supplements arrived in June. The covers look really rather fantastic. 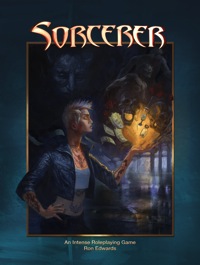 I’ll set the supplements aside for another time and consider the annotations, which are presented as full page comments (as opposed to callouts or footnotes) that sit opposite the original printed page — so if you were holding the book the page on the right would always be the annotations. The annotations are even in a serif font to distinguish from the original sans serif.

First comment is to recap on something you probably know if you are familiar with The Big Model: Edwards likes diagrams. I like diagrams too, so I really appreciate the flowchart that the author has added to the Introduction, which ties in the order of reading to the procedural order of starting to play — two distinct phases of individual character prep followed by preparation to play as a group. Edwards is really saying his book is intended to be read in order, and you need to comprehend the previous chapter before going on to the next. To be honest this wasn’t much of a leap for me — the reliance on terminology in the latter parts of the book mean you have to read the early parts, and read carefully.

Edwards also lays down what the Heart of the Game is, including the two concepts you must decide upon (with examples of how groups have formed themselves in the past). I’m big into making cohesive statements about intent in games, but not so much from arty pretensions (well, maybe a bit) but more because roleplaying is a leadership exercise — and not just for the GM, but for all players. Leadership is key to effective interpersonal discussions, and having intents clearly stated helps all the players shape their conversations and creative intents.

The next portion of the Introduction is about dice. I found this less useful — it’s second nature to me that when you go to the dice, it’s for something that actually matters. I did appreciate the discussion on oppositional vs orthogonal dice rolls, though — the dice can be used to resolve not only an opposed act but also two different actions that happen at the same time.

After Dice there’s Narration, which includes Bonus Dice. This part was the least compelling for me — it was useful to frame the narration by mentioning games where the order of speaking is controlled (InSpectres and The Pool, neither of which I’ve played) but it’s less useful to say “this game is basically neutral about that”. Well, yeah. Almost all games I have ever played are basically neutral about order of speaking; the fact that Sorcerer is designed so it can be neutral is hardly a lightbulb moment. Similarly the advice about making use of previous knowledge to provide the right narration (e.g. if there’s a gun, the gun features in the narration). Does that warrant a page of text? Maybe. Honestly I didn’t see a lot of value so went from reading carefully to scanning. Maybe that was wrong of me.

I did like the bibliography as a flow diagram (or C-Map).

The closing remarks are worth mentioning, though. The notion that plot cannot be prepped will always have counter-arguments, but the idea that nothing is sacred — not the character’s life, nor their value (don’t assume your PC gets to be significant in any way), nor the quality of the game is a very confrontational stance to take, and it’s a hard truth that most games — well, most fiction avoids. Some games and some characters are not special. It’s a kind of tough love approach to roleplaying, telling the players that they cannot be passive and expect to be coddled.

You can see how that might upset some people.

Edwards begins by saying “this… is about people talking in earnest [about making characters] to begin their Sorcerer play.” I don’t know if play is being used as a noun or verb here.

I’m going to skip ahead to the Diagram, which is some way down in the annotations. A lot of of the early comments about breaking out of comfort zones, focusing on the story about to happen over backstory (I totally agree, but this isn’t new for me), descriptors and numbers. The scope of numbers is tied to the scope presented in the previous chapter’s annotations — it’s important to decide how wide a net a single ability casts in terms of what a PC can do, but OTOH we’ve had broad-brush stats since Ghostbusters.

I complained that the Diagram was poorly utilised in the original book, and Edwards knows that because there’s a big section devoted to it in the notes. Actually I don’t know why it’s so far down the annotations — it’s such a high value passage that it should be one of the first things you read in the book. I like a lot of what Edwards writes here. I don’t much care for how it’s written — it’s retrospective, as if it’s an established tool whose function is obvious, and Edwards is simply reiterating. Well, he is reiterating to all of the hardcore Sorcerer fans, the ones who have contributed to Usenet and Storygames and other communities. If these annotations are the distilled wisdom of those years condensed for the newcomer they still read as a bit self-congratulatory, a bit “well, we had a special club back then, <wink>”.

That’s a minor complaint. Character establishment is at the heart of this game and the Diagram is a superb enabling tool, and the acid-test comments for character viability are also good. There’s a much needed section on what Edwards means by “kicker resolution”, and development too.

I very much liked the sections on NPC sorcerers (and mundanes), particularly the comments on why NPC sorcs mostly just get in the way of the character story (by upstaging player Kickers, establishing familiar tropes, etc).

Edwards closes this section with comments on an example of beginning actual play and creation. It was interesting (and helped reinforce some examples) but overall I was left with the same feeling I get from all actual play accounts which is “yeah… so?” I’m not big on other people’s game anecdotes, they read like third-hand stories, and rarely good ones. Glad they had a good time, though.

Next time, I’ll talk about the annotations in the Demons chapter.