The nice people who pay my salary have kept my busy of late, so October has been a lean month for posting. Still, it’s been chock full of actual stuff happening, so in no particular order:

I finished Dreadful Secrets of Candlewick Manor, after a 6 month hiatus between that and the penultimate session (whoops). I think the players liked it. There was way more mayhem than expected, several people died or nearly died, and the players forgot they were playing children and played the monsters I’d hoped they were going to become. I call that a result.

We came to the conclusion that ORE, or at least the way I ran it, has a bias in favour of hits to the face and head — so the top tip for MaoCT powergamers is to go for a PC with a really big forehead. I could analyse further but I’m unlikely to run an ORE game again, much as I respect the effort that’s gone into some of the titles.

(I do still like the simultaneous rolling and sets counting — but whereas Hollowpoint gets it right, I think ORE is a bit flawed).

Check out the latest Bundle of Holding! I donated and got a whole lot of Cthulhu goodness for it. I really wanted the Trail of Cthulhu and Eldrich Skies titles, but I’m looking forward to reading the Cublicle 7 offerings as well, and the Kenneth Hite Tarot of Cthulhu is proper fun. Recommended, and it’s for two great charities — the Alzheimer’s Association and Cancer Research UK.

Hurry, you have a few days left!

My birthday was low key on account of being jet-lagged (though that didn’t stop me taking part in a fun quarterstaff class with Paul Wagner). This is what my lovely wife had waiting for me when I arrived back in the UK: 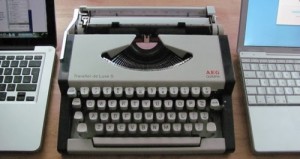 It’s an Olympia Traveller de Luxe S, approximately as old as I am. It’s not too much bigger (or heavier) than either of my laptops: 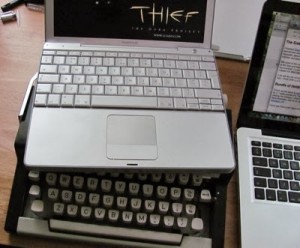 I expected that (a) I wouldn’t hit the keys hard enough, (b) I’d injure my fingers and (c) I wouldn’t be able to touch type but actually I’m doing fine on all 3 counts. Words are coming out mostly with the letters in the right order, and fast. The pages even scan OK for an electronic copy, though OCR is a bit hit and miss. 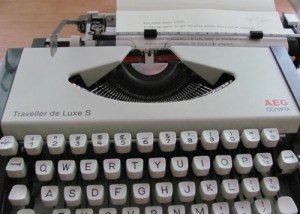 (typing my impressions of Lacuna, for another post — soon!)

And that’s about it. I’ve been travelling for 2 weeks out of four, and you’ll be pleased to hear it’s nice and warm and sunny if you’re not in the UK. Well, based on my sample set of two.