One thing that has driven my PC upgrades — the Thief series. Of course, Deadly Shadows was released in 2004 which means my most up-to-date PC is a single-core clunker that runs on steam and Pedigree Chum. 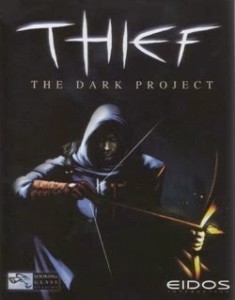 For the past five years I’ve been putting off buying a new console until I heard news of the fourth instalment, which is a difficult thing to imagine. The third game closed the narrative loop very elegantly, and the three titles focused on the three factions of Pagans (Dark Project), Hammers (Metal Age), and Keepers (Deadly Shadows).

So, there’s not really a fourth faction. Knowing that and the amount of time since DS,  it should be no surprise that Eidos Montreal are rebooting the franchise — the refuge of an artist devoid of ideas or any connection to the original source material.

Seriously, I do not believe this reboot will be worthy of the Thief legacy. For one it looks like Garrett is multi-classing into an assassin which ignores the basic premise of the original TDP: you’re not a soldier, not a superman, and if the guards catch you they have a good chance of doing you in. But OK, I can live with that.

Second issue: Stephen Russell will not be voicing Garrett. Obviously there will be fan outrage, and justly so; but this is a reboot, not a straight-to-DVD fourth sequel. Huge shame, but that’s not the worst.

The big head-scratcher is the decision to abandon the Pagan/Hammer mythology in favour of “aristocrats vs rebels”. One of the most compelling parts of the series, the thing that contributed to the fantasy atmosphere the most was the concept of the Pagan wild outside the city against the Church-sanctioned industrialisation inside. Perhaps there will be more depth to the regime in the reboot, but at the moment it sounds like “just” another corrupt city state, a tiresome clone of various other assassination-themed franchises with a bit more personal larceny this time around.

The mythology and atmospheric elements were a big influence on a couple of my RPGs (City and Square, my current work in progress being influenced by the notions of inside/outside), so the abandoning of all that was good in the original franchise is a bit of a disappointment; on the other hand the series was past its peak with the third game (mainly for the unnecessary simplification of the city map) so it was time. I can hold the reboot at arm’s length, like the recent Total Recall.

I wonder if Eric Brosius will have anything to do with the soundtrack. I’d buy that. Just not the game.

One thought on “Thief Reboot”