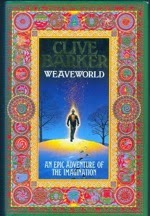 Nothing like a bit of food poisoning to give you new perspective. For me it was the chance to re-read Clive Barker’s Weaveworld.

This is a book from my late teens, and like most teens I liked my flavours strong and not subtle.  It’s too long, the characters are mostly one-trick ponies, the prose is unnecessary, and the plot swings from being pedestrian to incomprehensible. Still, it resonates very strongly, mainly for Barker’s description of magic.

I prefer The Great and Secret Show (and Imajica, although I read that much later) for magical imagery, but Weaveworld has coloured my perception of what magic should appear to be in both fiction and games. I say appear, because I don’t think there’s any system behind the magic, it’s all texture and the effect it has on the environment. The closest we get to philosophy is probably the concept of Cosm / Metacosm / Quiddity in the books of the Art.

Compared to Immacolata’s  Menstruum and Gentle’s Pneuma, magic in D&D looks a bit agricultural. Barker’s mages usually either know innately how to do magic (the Seerkind), or they’ve seized it through hard work and sacrifice (the Jaffe, Swann), or have been gifted it (Shadwell). Mostly Barker writes about people using magic, rather than the magic itself.

This is probably why Mage: the Ascension appealed to me so strongly (and it cites Imajica in the bibliography). Unfortunately it’s mired in an awful system and an awful political structure, the same clans-and-tribes nonsense inherited from the earlier oWoD games. When I ran Mage the best fun came from mostly ignoring the rules and using the spheres as a rough guide, and pushing all the Traditions nonsense to the background (the characters were mostly Hollow).

I have no idea how magic works in a modern FATE driven game like Dresden Files. My preference is for something completely freeform; a bit like the Everway approach, if that weren’t so light and twee and goody-goody. And looking at FATE (which I have been recently) I’m not sure an Aspect driven game would work either. Of course being my new favourite thing WaRP has a lot of promise, with magic being described in the same loose sense as other Traits. The only downside is there’s not enough to lose; no sanity, no acquiring deformities through paradox, etc. I’ll work on that.

Now for a new favourite. My new favourite blog is the Anachroneironaut. Amazing gothic illustrations, lovecraftian houseplants, and ink. Check out this amazing piece of art inspired by Perdido Street Station.