Before I begin, I should be upfront: I’ve known the author for many years, so I’m inclined to be favourable. Readers should be skeptical of reviews anyway, but there’s good reason to be in this instance.

That said, I’m going to tell you why this book is worth your time. 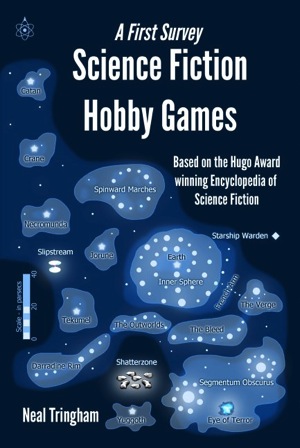 However this book isn’t a stripped down encyclopedia; it’s more a catalogue of games that fit under the broad heading of “Hobby Games” that includes RPGs, board games, wargames, and even PBM. It doesn’t include video games although there are numerous references in the text concerning the influence of/on video games and parallel development.

Citation is thorough (as is found in its sf-encyclopedia parent). Individual entries are longer than encyclopedic ones and presented as short essays. There’s a bibliography, and a nice glossary that includes not only roleplaying terms but definitions of many SF tropes, which are then used in the entries to differentiate the sub-genres each game emulates. These include entries on genre taxonomy (Cyberpunk, Transhuman), game terminology (“massively multiplayer”, “interactive narrative”), and references to fiction in fantasy, SF and even comic genre. If you have the epub version, these are all nicely hyperlinked from entries to glossary.

The book is split into several sections: initial essays on How To Read This Book (citations and naming conventions), brief discussions on games and game worlds, and then several large sections on types of games. RPGs come first, then Wargames, then Board Games, Gamebooks, and PBM. The glossary and bibliography completes the book. Here I confess I’ve only read the RPG section and dipped into the others as I have little interest in wargames (aside from WH40K).

It’s not complete. John Snead’s Eldrich Skies and VSCA’s Diaspora are not included, for example (although Shock: Social Science Fiction is). But it’s a first survey, and the main value is commentary on titles that have either disappeared into obscurity (e.g. The Morrow Project) or ones with a diverse heritage that benefit from a thorough analysis (Traveller). Each entry covers the objectives of the game, literary heritage, game system, SF themes and other related works (board games, video games, etc.). Overall I found the approach to be very consistent and mature, although some games have more to say about them than others.

There are several types of gamer this book might appeal to. If you really love SF and if in particular you want to either (a) pick a game that emulates a particular type of SF or (b) read more widely on the sub-genre of a particular game, this book is very worthwhile.

If you’re interested in the history of our hobby, and particularly in SF games which usually play second fiddle to D&D and other fantasy games in historical analysis, this is also very good. There is plenty of stuff from the early days of the hobby to satisfy both a young player’s curiosity and an older player’s need for gratification and self-congratulation (ahem).

What about the future? It would be nice to see a second survey to expand the initial group of games. Since Neal has included Call of Cthulhu perhaps the Superhero or Pulp genres are ripe for inclusion too. I would love to read Neal’s take on Synnibarr (and he does cover some obscure stuff, for example Continuum: Roleplaying in the Yet). But sourcing these games and much less playing some of them (shudder) is not a trivial undertaking.

In summary: there is nothing like this book anywhere else. If you want a wealth of information and opinion on our hobby games (especially the more obscure elements) from an author who has contributed to entries to the SF Encyclopedia, this is worth your time.