Beyond the Wall: Merrow

This is my last instalment of my Beyond the Wall planning tools. This one is for tackling scenario packs.

This should be blindingly obvious but I’ll say it anyway: even if you design based on the mythic cycle that assumes all the foreshadowing, threshold crossing, progressing towards the climax and denouement, there’s no guarantee that the players will play ball.

What if the characters decide not to proactively attack the problem, but stay in the village — even after they are supposedly prompted to action (mentor phase)? Well, then you’ve got to be creative. But even then you can take steps like taking the Threat within the dungeon (approaching the inmost cave) and using it to attack the village, to bring the hazard closer to the village itself.

We’ve assumed a particular mode of play based on a shared appreciation of a particular genre of fiction. Probably, probably, everything will run according to expectations. But never just assume.

I went through several iterations of brainstorming tools for the Scenario Pack: first using OmniOutliner, then Freemind. While I still like those methods the best is still probably the spreadsheet, just because it’s easy to see what’s going on (helps if you have a big monitor!). The alternative files are linked below, but TBH the best is still the spreadsheet.

Be warned that the order of presentation here is different from the one in the existing scenario packs. That should be no big deal; it should be clear to the GM at which stages the tables become important.

Once you’ve hacked through the spreadsheet you can cut and paste the tables into a nice document, if that’s what you want.

I’ve repurposed a LotFP scenario I wrote for this format. I think it actually works a lot better in this shape than the previous one.

Sorry, the pdf is a bit rough and ready. But you probably get the idea.

Special notes for people who know me: this is based on Sunder’s Children, but it’s quite different. Don’t read if you think you might be playing it in the near future 🙂

I’ve not put this into any nicely formatted Word document, sorry. This is just and example (and for my personal use).

Previously I made a big deal of the Monomyth in planning out the scenario, and this theme continues. To round it out I’ve added procedures for the last two stages: Resurrection, and Return with the Elixir.

Here’s how they work. These are closing remarks from the players (as their characters) and from the GM (as the Village). These happen after the Road Back where the PCs have found their various hints.

This is a bit metagame-y, a bit storygame-y. It may put some people off, and that’s OK. If you’re not keen, skip it. There are no dice involved, no actions taken by characters, it’s just a wrap up.

This isn’t meant to be super formal. GMs should recognise that it may be hard for some players to engage with this conversation if they’re with strangers (e.g. at a convention) so the leading questions may help this. If you don’t like the individual monologue bit you could leave that out and just ask group questions.

Return with the Elixir

This is the bit where the GM narrates the end. They do these important things: 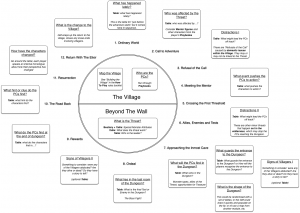 And that’s the end. Hopefully you’ll like the tool and find it useful. Please give me feedback here or on G+.

All of the Beyond the Wall posts are collected on the page above.