Beyond the Wall: Community and Adventure

So, previously I mentioned my latest play session of BtW.

The players loved the character generation phase, but didn’t interact so well with the rest of the adventure, and part of the issue was the failure to establish the stability of the village.

To address this, I propose two phases: the Community Phase (where the players interact with the rest of the village, resolve domestic plots, etc.) and the Adventure Phase (responding to threats, “traditional D&D stuff”).

The Community Phase is already implied by a lot of the adventure setup — it’s the Ordinary World in your heroic cycle of leaving the village and returning; it also emerges as part of the playbook cycle. 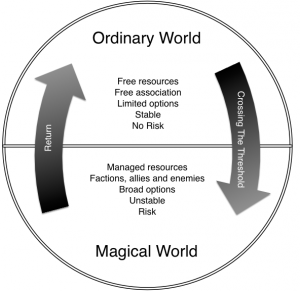 To make the Community Phase completely explicit, we now deliberately change the mode of play in the Village. Interaction is entirely social. Adventuring skills, spells and weapons have no place in the village, so the associated game mechanics have no place either. In their stead we consider a set of Community Markers: 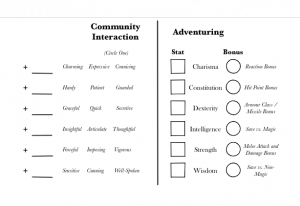 This is a section from one of the “south oriented character sheets” I’m designing (analagous to a southern oriented map). The Markers on the left are derived from the bonuses for the traditional stats on the right. If you have a bonus (or a penalty) mark it in the space on the left in the appropriate row, then circle one descriptor you feel represents how you interact with people.

Now, when we come to interact with other characters, roll some dice. I like 2d6, but 1d6 or 1d10 will work too. It all depends on what scale you want and how much of a difference a +1 will make. I’ve picked 2d6 to function like Apocalypse World.

I’ve assumed in the Community Phase that the GM will throw a random NPC at each PC and force some kind of interaction. This could also be formalised, although I haven’t worked out a system for that just yet. The freeform method would probably be

Example: In the Community Phase*, my wise and sensitive PC is approached by a young NPC with a crush on another character, and is seeking advice. If the character chooses to give advice in a sensitive fashion, they get the bonus.*

If the 2d6 + modifier result is 8 or better, the outcome is a positive one for the PC, and the PC gets a positive tie to that NPC.

If the outcome is 7 or less, it could be a complication, creating a dilemma that must be resolved in the future. The PC still gets a neutral tie, but this time it’s something that needs to be resolved — if it isn’t, it could become a negative tie and affect the PC’s relationship with the NPC, their family, and possibly the whole community.

Possibly the character doesn’t care about their negative ties — after all, they have little or no effect when the PC is aventuring Beyond the Wall.

(You could even give positive and negaitive ties an effect in the Adventuring Portion — using them in lieu of Fate Points (or as “GM’s Fate Points” for negative ties). But this is probably a bit metagame-y for some players. I would probably just use them for flavour in the Community section).

Once the PCs go Beyond the Wall, the Adventure begins: here their Community Markers are irrelevant. Note that out in the wilds Charisma has a different function than in a domestic setting, because the PCs are accepted in the Village and don’t have to make reaction rolls or loyalty tests.

« Beyond The Wall: Play Report
Inverted and Perverted Character Sheets »