I’m going to state the obvious. 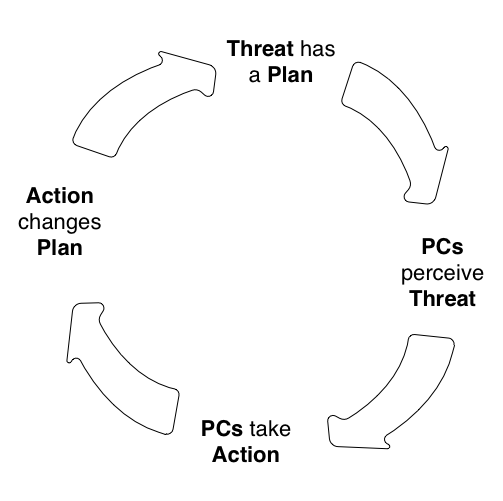 When you run a game, the thing that motivates PCs to action is the perceived Threat. Without any threat there’s no pressure to act, and without PC action there’s no game.

Now, the word “opportunity” may work better than threat for you as a motivating factor — it certainly makes sense for sandbox type games.

But, let’s assume a classic “there’s a bad guy! Stop him!” scenario. We get that the bad guy does something bad, and the PCs respond. At some point they may even change from being reactive to proactive.

Logically if the PCs perceive a threat and respond, the bad guy will do exactly the same if they see the PCs taking that action. They will either adapt their plans or they won’t. This is a decision point for the GM:

This decision making works on all levels. At the lowest troop level it’s pretty obvious that if the guards spot the PCs sneaking into the compound, they’ll raise the alarm and double patrols.

However, the Big Bad can only take actions if they’re actually aware that the threat exists. So, if their lieutenants fail to inform the command that their base is under attack, they can’t actually take decisions to change the plan.

The Big Bad is at the mercy of informed Lieutenants. To the BB the Lieutenants are one big happy interoperating team in a well-oiled machine. Actually the Lieutenants are all individuals, and they wouldn’t be where they are today without ambition. Each of them is probably capable of running the show, and some of them know just how ambitious their peers are.

This means that while the BB’s instructions downwards are pretty unambiguous, the feedback they get from their lieutenants is coloured by internal disputes from middle-management (as well as general competency). Naturally BB can manage poor performance with judicious recruiting practices and terrifying disciplinary procedures, although the first one may not be an option if the plan for world domination is on a schedule. 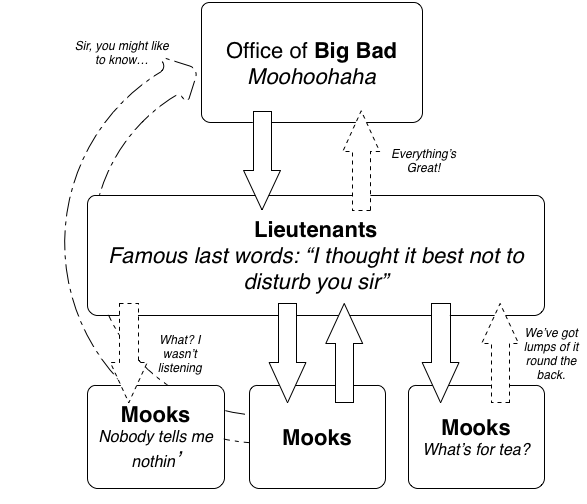 The information the Lieutenants can give is only as good as they get for their subordinates, too. It’s going to be nonexistant if their own downward communication is weak (on the left). Their team could also be steady eddies, very reliable with routine tasks but generally having trouble with adapting to change (on the right). And it’s only a matter of time before the highly-performing mooks in the middle look to their own masters and think “I could do their job…”

All this is great news for the PCs. Suddenly, sneaking into that fortress with a hundred heavily armed soldiers doesn’t seem so bad, if the bad guys are hamstrung by bureaucracy.

Now, on to the next question: let’s say the BB’s command structure doesn’t let them down and they do find out that the PCs are making a move. What can they do?

Organisations have strengths and weaknesses. Strengths include resources and a plan that isn’t obvious to the PCs. Weaknesses are a large corporate machine that might not communicate perfectly with itself. So, if the PCs want to attack the organisation:

It can get you in a lot of trouble, thinking, Errol, I shouldn’t do so much of it.

« Beyond The Wall: Laying Out The Scenario
Beyond the Wall: Merrow »