What do we say to the God of Death?

Last weekend I went to the 9 Worlds convention. It was awesome, and I totally recommend it. The combination of many different cultural tracks and a really strong focus on being inclusive made for a great atmosphere.

This is what I saw:

Needless to say there was also a lot I didn’t go to but would have liked to, owing to clashes. Here are some of the real highlights:

This was an early start on Friday on the Academic track, and proved to be one of the best talks in the whole Con. The premise was how one would go about archaeology of Middle Earth and other worlds, and what you might find — how one might gather evidence of how dwarven and orcish societies may have interacted over centuries, for example.

Sex Work and Identity in A Song Of Ice And Fire

This one was in a small room in the post-lunch slot. Mostly it covered the dehumanising and othering of sex workers by the various characters in the series. Both panel and audience generally took GoT’s misogyny and sensationalising of the subject as a given, but what made the talk was the attention to detail (detail which I’m not really inclined to dig for myself) such as the way certain characters personify attitudes to be the hate figure when those attitudes are shared by supposedly “good” protagonists as well, or the way most sex workers have not been given real names in the text.

This was on the Steampunk track. For a 10 quid ticket, we got to drink a lot of gin.

The talk began with a history of gin, including a dissection of Hogarth’s Gin Lane and the Gin Reform Act and its effect on bathtub gin-making. Then we went on to distillation methods, which was where I got my chemistry geek on.

The five main ones on offer were:

Of those five, I still love the Hendricks but they were all very fine — even the cheap one from Aldi. The newcomer is apparently rare as hen’s teeth, being a small batch production. Ah, well.

We also learned about enjoying gin with water instead of tonic. I still prefer a decent tonic, but water really brings out the interesting notes in exotic gins like Gin Mare.

Other gins on offer included Hoxton’s with grapefruit and coconut (didn’t like it) and a brussel sprout gin which tasted like a watered-down absinthe.

This was the gaming track. I spent a lot of Saturday gaming, running a Beyond the Wall scenario in about 75 minutes (testament to its pick-up friendliness) and then playing River’s Absolution, a Firefly hack of Witch: The Road to Lindisfarne in the afternoon.

I’ve only played a few GMless games, but the session crystallised some thoughts on the nature of storygames and how they differ from trad RPGs. Some of the players in RA were at ease with the whole shared ownership of the story and scene; others occasionally looked to the facilitator for both descriptions of the scene, and to arbitrate over the scene’s events. Much of this comes down to leadership and decision-making norms in our hobby. Generally the GM provides the leadership when framing a scene, and leaves the decision making to the players. But in GMless games there is no real decision-making: often events are assumed to come to pass, and the game is about exploring why those decisions are made.

That’s all fine when all the players buy in, but it falls apart when you take expectations from trad gaming. In some examples I might make a suggestion that is reasonable in-character, but highly disruptive — such as declaring that I am putting the witch to the sword right now, never mind our journey. Here I’m relying on my fellow players to block me in this action, and they are relying on me to acquiesce no matter what. Such was the case when I jokingly suggested to float River out of the cargo hold and save us an inconvenient journey in the first scene.

I think it boils down to this: it’s counter-intuitive to frame a scene where there is an apparent decision to be made, and then assume that the decision has been made and instead explore only the motivations. I get the feeling that this will always be a hurdle with this type of game.

Finally, I got a lesson from Syrio Forel, First Sword of Braavos! Well, technically the lesson came from Miltos Yerolemou who plays Syrio in GoT.

(No, I haven’t suddenly turned into a GoT fan. I just like sword choreography) 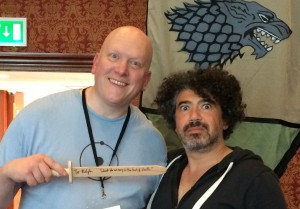 This was one of those things I had to attend just to say I’d done it, but it ended up being one of the best parts of the convention. The lesson was strongly tipped towards choreography as opposed to martial, but was great fun. My only regret was doing it in boots and jeans, which proved to be a bit uncomfortable to train in.

I even got a souvenir: 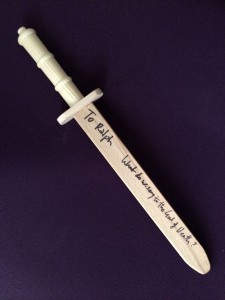 What do we say? 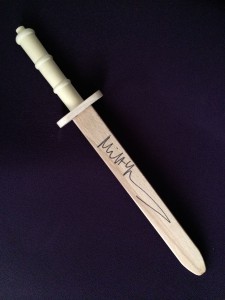 With this blade I will be inwincible.

One thought on “What do we say to the God of Death?”