Martial Truths: Back To School (part 1)

This Is Your Brain On Martial Arts 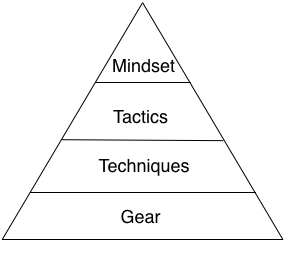 This is the modern combatives “tactical pyramid”. It shows the priority of attributes in a martial artist needed to win fights. Natural advantage aside, all of these aspects may be trained (or in the case of Kit, purchased with gold pieces).

Let’s break it down:

Understand that this triangle comes from a modern combatives source, where “kit” includes concealed guns and knives. Clearly if the weapons on one side were disproportionately better — say you were openly carrying a big gun and the other side wasn’t — you’d have a kit advantage that might trump technique. You’d still need the mindset to do harm, though.

Another comment about modern combatives: the tactics for street defence involve never being in a risky situation in the first place. A lot of the focus in combatives I’ve attended is on hazard spotting or avoiding being surprised, knowing when to flee, etc.

That context aside — I really like the triangle. It’s a good illustration of the priorities the instructor should have when training students.

If tactics and mindset are so important, then why are we obsessed with teaching techniques in MA classes? Here are a few reasons:

Those are all positives. There is one negative, which is cool technique is what Hollywood has taught us to expect. When we visualise ourselves fighting — either as martial artists or in RPG combat — we think about looking good. A lot of MA mastery is about getting over one’s own narcissism.

You’ve probably seen this diagram before, too:

Learning to drive is the example often used, although I’ve also seen it in corporate seminars — usually while trying to make the audience feel good about culture change or something similarly nebulous.

If someone told you you’re going to actually get worse at the activity before you get better, would you even start?

It should come as no surprise that the point at which the student becomes consciously incompetent is when they’re most likely to quit.

Let’s say the student has attended classes for a few months. They’ve won a few fights, mainly on natural talent (agression, vigor, speed) rather than finesse. This is because while they’re great at doing the techniques in a controlled environment, it all goes out the window when their blood is up.

Now say they’re a conscientious student — they want to believe in their new hobby and for them, winning doesn’t count without good form. Unfortunately putting the techniques into place is a cognitive load. While they’re thinking about doing the technique right they have less space for tactical reasoning, and… they start losing fights to less experienced students.

This is the point where they start to have doubts — doubts about their own ability, and doubts about how well they fit into the school. Obviously this is where a coach comes in, to hold a mirror up and help the student realise that they are improving.

Ultimately whether the student remains in or leaves the school will come down to the school culture, of which the Instructor is a major element.

When a new student comes to a school, they may well think they’re getting the same experience as they would in the school down the road. And for a lot of students who only ever study at one school they’ll probably never know the difference.

However, martial arts schools don’t come from a mold — not even the ones that ascribe to an identifiable sub-form (say, Wado Ryu). The form has to be interpreted by the instructor and then passed on to her students.

This is all part of the school culture — something that will influence whether a student joins, stays with or leaves the school. I’ve considered a four-fold diagram: 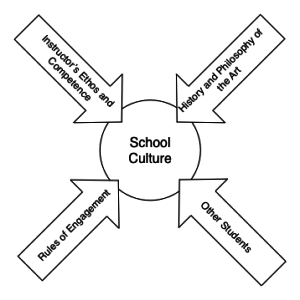 While the school culture may be rooted in tradition, it’s really the Instructor who personifies that tradition and is the real source of the school’s identity.

Martial Arts schools are tribal. That’s not intended to be pejorative, just a statement of fact. The fact that schools can have their own culture is an indicator of this.

This means that when two schools come together they with interact positively or negatively based on the same cultural markers above. Furthermore the similarity of some aspects is no guarantee that the two tribes will get along, and differences don’t automatically mean disharmony either.

Disagreements and common ground can be found in both the Philosophy of the school, and the People who practice it; and they can happen at both high and low levels. Let’s consider the four markers in a slightly different way: 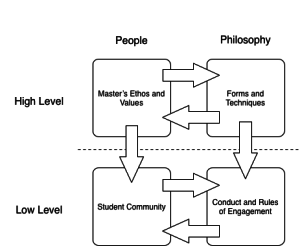 Now consider how another school might view this tribe. If the masters tend to agree then it may be because their views on form align. If they continue to agree with one another, they may end up influencing one another’s thoughts on form, training and technical art. On the contrary if they disagree, these are the areas where they will find fault with one another.

At the student level the interactions will be predicated on training and competing with one another. If the students like each other they may be prepared to change the Rules of Engagement, even if this isn’t what they would normally do in the gym at home. If they dislike one another then the Rules of Engagement become contentious, with potential appeals to authority to tighten or relax those rules. This escalates tension from the student body into the domain of the masters.

Remarks on MA in RPGs

One of the aims of this series is to talk about Martial Arts in a RPG (and fiction) context. How does knowledge of school cultures help us?

First, remember that a martial art isn’t just a skill, it involves practice and experience. While this is the case for all skills, practicing MA is unique in that gaining experience involves deliberate competition with others where the stakes are high: there’s the potential for injury in training, or even death.

This coupled with the tribal nature of martial schools means a great potential for forming positive and negative relationships. The fact that those martial artists fight is possibly the least interesting thing about them. If you want to simulate martial arts in a game, forget the Fu powers of Feng Shui or the charms in Exalted, what about Strings from Monsterhearts or Hx from Apocalypse World?

Now that you know that, consider the effect of emotion on the competitive arena. Judgement, Vigor and Calmness are the three pillars of Hope’s teachings, but Calmness is easily upset if there are bad feelings — I know firsthand the feeling of adrenaline that comes when facing down an opponent who you have a beef with outside the ring, and it’s not an advantage. What would happen in a fight if one combatant used a String on another?

Living tradition in martial arts has always been important, and the Western MA movement is often criticised for its lack of direct master-to-student lineage. Instead most WMA are based on masters from Eastern traditions picking up the manuals and interpreting the contents according to the ethos of their favoured school. This is why some WMA will look decidely like kenjutsu or modern sport sabre or theatrical stage fighting. But it’s not as much of a mess as it sounds; WMA is also practiced competitively and studied academically, and those conflicts will tease out inconsistencies and weak behaviours.

The WMA instructor’s biggest problem is developing her own ethos in the absence of a mentor. Beyond that they are no different from their counterparts practicing popular eastern MA — and both need enough self belief and introspection to judge when the source they have learned from is not 100% correct.