I think everyone has some tacit feeling about Kate that is bigger than words, and this patchwork of scenes is the best we can hope for. I started writing this about a dozen times and nothing came up to scratch. Eventually I grabbed the Oblique Strategies — which is I guess a kind of secular Tarot — and the card I drew said “Humanize something free of error” (sic).

I’m still not quite sure what it means, but somehow it resonates, so that’s what I’m working towards.

I want to focus on Kate, but I’m having a hard time separating my impression of Kate from a significant time in my life when she was very present — and that’s further complicated because it wasn’t just Kate, it was a whole load of people that gravitated around my Vampire game in my 3rd year.

I should have been studying for finals, and instead I was immersed in a terrific group of friends. We played games and hung out. It was an inspiring time to be gaming, too. There was a revolution happening in OURPGSoc; the zeitgeist was the “society game”, a very real cultural change in the way our society interacted.

Kate embraced and embodied all of this change. I’m sure that the change would have happened nonetheless; but a lot of what made that cultural change so tangible and immediate to me was Kate. I’ll try to explain.

I met Kate the previous summer, at the prototypical society game LARP, Conclave. I’d arrived halfway through the campaign, and Kate was probably the first person who spoke to me as I was trying to decide what to do with my first turnsheet.

Then at the end of the game I was musing about what I would run in the Autumn, and I talked about Vampire, and Kate practically leapt on the idea. Now inspiring people have come into my life at times and told me that I should do something, that it was worthwhile and within my grasp when I had doubts. Like the time a teacher told me I was smart enough to apply to Oxford, and so I did. Well, Kate liking the idea of playing Vampire was one of those times. That may not sound like it was in the same league, but it totally was.

And when the third year came it pretty much defined my life thereafter — the potential of games, my own ability to play and run them, and what I wanted from friendships and community. Kate’s confidence in me was a big part of that, though not the only part. Kate was one of the forces that bound that particular group of people together so strongly and created such lasting interactions.

I haven’t even touched upon all the things Kate did after that — all the brilliantly creative things she gave to our gaming community as a player and an author and a leader. People drifted away from Oxford and came back. I didn’t see Kate so much in later life, but I remember that when we did end up in the same place it felt like we just picked up where we’d left off. It was a tribe thing.

If I hadn’t known Kate, I probably wouldn’t have been any poorer for friends. I may still have run the Vampire game and met and loved the same girlfriend, formed the same friendships, and played way too much when I should have been working. I don’t want to underestimate the impact all those other people have had on me. But I do know that there are some people I would never have met and formed deep friendships with, and insights into life I would have missed if not for Kate.

This is a poor imitation of all the thanks I want to give for Kate.

Kate, I’m really glad I blew off studying to play games with you. It changed my life. 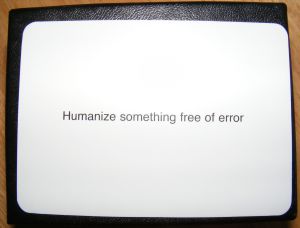