If I were to describe an innovative game where

you might think “wow, meta! Sounds like one of those ironic postmodern dirty indie hippy story games I’ve heard so much about.” 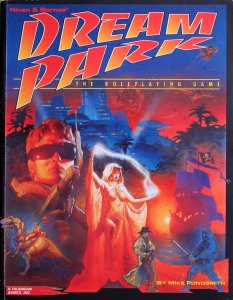 1992 called, and wants its game premise back.

This is Dream Park, an R. Talsorian product from 1992. Based on the novels by Niven and Barnes and published in the same year as the California Voodoo Game this is kind of a cut-down Interlock system, kind of a generic universal system, and kind of a masterclass in how to write short punchy games.

I bought the game and ran it briefly and pretty badly (I was getting into my stride as a GM) and then Vampire became a thing, and this book got shelved.

It’s a thin book. I don’t really care for many of the fonts, and most of the art is dated much in the way the Cyberpunk 2020 art is also dated. There were only a few support products for it (adventures mostly) but it crams a lot of workable game — albeit a simplistic one — into 128 pages of not very dense text.

This is what you get:

It’s simple and functional. It serves the intent of the game very well; that is to say, you can play it as-written and make full use of everything with a point cost. The fact that you’re not simulating a complete environment but a game environment liberates play from the concerns of game balance (whether that’s necessary or not) — so if some of the powers have a better point-to-value ratio than others, that’s the game, and it’s there to be exploited. A lot easier to do than GURPS, too.

In fact I think the austere nature of the game makes it easier to present the duality of identity. Characters are artificial, two-dimensional, over-simplified, and that’s a good thing. It underlines the concept that this is a game (within the game). Certainly making the game-game characters shallow entities could be used to throw the personalities of their players into sharp relief.

I like layers of meaning and identity, and I’d like to know if the designers ever intended this to be a thing. Certainly when I first picked it up I thought of running an in-park, out-of-park game (much in the way I’d run a split community + adventure Beyond The Wall game) using the DP system inside and something else outside (Storyteller at the time, these days WaRP). I wonder if anyone actually did that.

Game Points are the currency and reward system. They’re won by completing games. They’re also lost sometimes — the GM can penalise certain activities (like bad sportsmanship). PCs whose game characters die lose half their game points, but those characters are rarely dead-dead.

Taking the idea of a dual world further, game points are obviously meant to have significance to the PC player. In the out-of-park world they represent status and priviledge. What are the consequences of dropping points in a game? Is there a league table? Are points ever traded, and if so, what for?

This is the best bit — it discusses how to craft in-park adventures. Cross-genre gaming is recommended and there are a lot of examples to choose from to mash up.

Adventures are structured around a number of beats. Beats are things like puzzles and challenges and cliffhangers; and there are a lot of suggestions. The Beat Sheet is really a heavily railroaded sets of challenges — not unlike rubber-sword LARP. But since we’re cynically emulating LARP, that’s fine.

Then there’s a bit about designing locations and tying beats to locations. It’s simple and elegant.

Finally the meta gets turned up to 11 with Setting The Stage, where the GM gets to play a sneering characature of herself, grandstanding before the start of the adventure.

This is a cross-genre game, simple and very complete. No doubt the designers were thinking of the other cross-genre games of the period (Torg, Rifts). This is evident in the ideas section in the back — how about putting Dream Park in your own regular campaign? Or how about using it to represent cross-dimensional war in a myriad of ages?

All of those are cool, and achievable with this system. But still the draw for me is the players-playing-players duality and the potential for accumulating game points to not only be a measure of power but also social success.

Sadly it seems this line is the one that’s absent from R. Talsorians’ DTRPG offerings. I can only assume the license has lapsed and it’s not economical to try to get it back. But if you happen on a secondhand copy at a non-crazy price, it’s worth picking up just for the last 30 or so pages.