John Wick said something about Game Balance, and it annoyed a few people.

Putting aside the hyperbole (Game Balance Does Not Matter!) I broadly agree, except the definition of of “game balance” is a bit lax.

Weapon Lists Are A Bug, Not A Feature

Being a fan of gaming minimalism I’m inclined to agree that weapon details are unnecessary. Being a MA instructor I know that nearly all systems get weapons wrong anyway (at least melee weapons). In that case, they might as well be abstracted into some other property.

This is Wick’s definition of a RPG:

roleplaying game: a game in which the players are rewarded for making choices that are consistent with the character’s motivations or further the plot of the story.

…then surely those ephemera are serving a useful function that the player can use to gauge chance of success? Even if you abstract external ephemera like weapon stats (because it doesn’t really matter if Riddick uses a knife or a gun or a teacup) to internal ones (like Fire in Everway), the player still has to make decisions, and those decisions will be based on where the points went during Riddick’s character creation.

If you believe that Riddick was created using a sane amount of character points, of course.

Chess Isn’t A RPG / The Goal Is Story

Let’s take one example of a RPG that could be argued to fit Wick’s definition of “not a roleplaying game” because it has a tactical element that does not require roleplaying. It’s Lace and Steel: 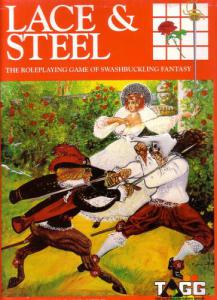 This system uses a pretty tight card game to play through duels (sword, magic, and repartee). Actually playing these sub-games requires no roleplaying whatsoever. However the decisions leading up to a duel where the player gauges their chance of success against a foe, and the stakes involved (what victory and defeat mean) would seem to fit the definition of decision making; and the stakes will provide an outcome that delivers plot. The only part that’s dubious is the way the player is rewarded for making those decisions and putting themselves at risk.

That’s a matter of player expectation and creative agenda. If as a player I only feel rewarded by winning full stop, then the argument that L&S is like Chess could be upheld. But making a decision that could result in failure is part of the game I signed up for. Failure is an interesting result, and I’m rewarded by being free to make the choice, not by the outcome itself.

So, anyway. Zak S posted a video of a conversation with Wick, and I haven’t watched it yet but I intend to.

I don’t really have a dog in this fight, and I think it’s an interesting discussion, even if it retreads some old ground (my first impression was “the 90s called and it wants the G/D/S debate back”).