It’s 4am UK time but midday in Singapore, so you could call that a lie-in. I’ve been agressively trying to rebalance the time-zones; arguably easier travelling East-West since all I need to do is stay awake, which I mostly did — managing a respectable 9.30pm (with naps) but we still have a half-eaten episode of Gotham for today.

We’re celebrating a combined 80th birthday this weekend. Our social circle pretty much wrote October off as a bad lot, and the usual celebrations didn’t happen for all the Librans.

So we went to the pretentious supermarket and I snagged three different bags of threesixty coffee and a couple of bottles of bourbon. This one’s Guatamalan, it’s lovely and fresh although my favourite is still the Tanzanian. 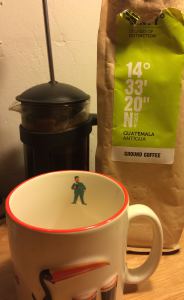 I haven’t written here for a month. I forced myself to put something down about Kate, and then a few sporadic thoughts came as a distraction from the mid-October stresses, but otherwise it’s been a dry patch. After looking deep into the past I’ve been contemplating the future, both professionally and creatively, deciding whether I should adjust my expectations to the world, or whether the world should adjust to mine. As usual the answer is messy and confused, and ultimately “a bit of both”.

I’m not sure what the end state will look like, but part of my deliberation has brought me back to the reason I started this blog as a creative outlet and a means to practice writing. With that in mind, I’m going to try to focus on actual projects and write more frequently again. The coffee is brewed, let’s talk about the future.

I have three creative projects on the go. All of them are around games, and two have deadlines around next April when I’ve committed to running them. The third has no deadline, which is less good; I’m trying to work out how to hold myself accountable, and holding myself accountable is one of the boring things I do in my day job, and I don’t care for it.

This is a Beyond the Wall playset inspired by and set in the world of Garth Nix’ Sabriel and sequels. It’s probably the project which will be easiest to execute, just by following the templates in BtW and the ideas I’ve expressed earlier regarding separation of internal village from the external adventure.

The game will be set in Wyverley college, meaning all PCs will be female. This is the “village” of BtW and character playbooks will focus on developing the PCs relationships with the college and the staff, as well as their reason for being at school there. The external adventures should take place in the surrounding areas which, being close to the capital-W Wall (map) could lead to all kinds of encounters with the Dead and Free Magic users.

I’ve already drawn up a character sheet for the game. Other features should include:

I’ve had a mind to write a Sapphire and Steel themed game for a couple of years, since we discovered the Big Finish audio plays. I’ve also had the urge to write a game that’s Powered by the Apocalypse.

This one is mechanically the most challenging. So far the features I’ve settled on are:

If you don’t know PbtA games then the jargon above won’t mean much. One thing I’ve realised however is that I must also run some Apocalypse World (or Monsterhearts, or something) as I’ve only played so far. More later.

This is the biggest project, and the one without a deadline.

This is a game about building and then playing in a City. A couple of years ago I had an idea for the City Accelerator, and this is an attempt to make something coherent and useful of that idea. Along with the use of cards, the system should make use of the WaRP OGL system.

It’s a game for presenting the City as a character, inspired by “city fiction” from the likes of China Mieville, John Brunner, some J G Ballard, Mary Gentle’s Rats and Gargoyles, Warren Ellis’ Transmetropolitan, and Peake’s Gormenghast. Urban Fantasy is a thing now, and while this isn’t an urban fantasy game per se it is all about people living in close proximity and relative anonymity, about finite resources but infinite complexity, about boundaries between inside and outside and about how cities look different from different perspectives.

Now, I’m conscious of a large number of city products in the RPG market:

I’m aware of all of these products, and keeping in mind the fact that my idea is different from those is a challenge in itself. After all, if someone else has already done such a game, what’s the point in re-writing it? It would just be another “city heartbreaker”.

Actually I do think it’s sufficiently different, but I need to work on an elevator pitch that explains that to other people. It’s different from OTE, Itras By and A|State by virtue of not being a complete packaged city setting, but more of a toolkit and visualisation tool. It’s different from Kingdom because it’s consciously a traditional, GM-led RPG in the spirit of what I call “90s minimalism” design a la Everway and the aforementioned WaRP system (though the use of the latter doesn’t help comparisons with OTE). Perhaps Vornheim is the closest in terms of intent, but I’m happy that my execution should be completely different.

That’s about as much as I can say at this point.

As well as design, I need to play more. The current list of must-play (and run/facilitate) includes

Most of these are indie games for which I’ve bought actual physical copies, so I better get along and play them, right? It’s the right time of year, now the days are shorter and one wants to be inside and telling stories.

I’m considering turning the comments off here. Since I now push posts to social media there are enough places where people can reply if they feel the need.

Comments are not really been what this blog is about anyway. I started writing here because I wanted to shape the format away from Livejournal. The capacity for comment, likes and plus-one moderation must shape the relationship with the audience. And make no mistake, it’s great to have feedback (and affirmation) but it really doesn’t happen that often. If I ever had expectations of getting comments or replies, they’ve gone down as I’ve participated in social media more.

If someone doesn’t comment or like what I write, what does that mean? I assume I’m more likely to be overlooked than actually disliked. But more importantly if someone feels strongly enough to write about something I write, I’d like to encourage people to write their own articles as counterpoints. We exist in a culture of threaded conversations and the signal to noise is low. In the old days if you didn’t like something in the newspaper you wrote a letter to the editor, and that meant for the most part you thought a bit longer about the message in the reply (Daily Mail being an exception, I suppose).

I won’t turn the comments off just yet; and I’d be interested to read if anyone actually values the comments facility here. It doesn’t help that I moderate the comments of course, but I do draw the attention of spammers on occasion, so that’s the way it will be for the time being.