This is part of a series for Death Comes To Wyverley, a playset for Beyond the Wall inspired by Garth Nix’ Old Kingdom series. This should be considered a fan work.

We all know that playbooks are one of Beyond the Wall’s USPs (at least, for a traditional OSR game).

Reiterating earlier comments, this is what a good playbook should do for kicking off the game:

For DctW the premise of the original Playbook Cycle is unchanged: before the game begins each character has gone through their own little cycle of personal development, which includes 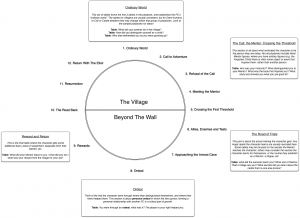 The core playbooks of BtW assume the same kind of Ordinary World for all characters, with these central questions tackling the fundamentals of the PC’s early life — family and early childhood. The structure is the same in DctW (at least for most characters) with a central focus of Wyverley College.

Just as characters in a regular BtW game are young people on the cusp of adulthood, Wyverley characters (with some exceptions) are not far from graduation. By default they’ve just entered the Sixth Form. Almost all characters have been sent away by their families from an early age to Wyverley and inducted into the First Form (between 5 and 10).

The four common tables are:

Common Playbook Tables (pdf document) — this is an early draft of some sample tables.

Characters will have four key Relationships that arise from the playbooks. These are:

Blurb for the nine playbooks

Finally, here are the outlines of the various playbooks.

Note that while several of these playbooks have grand names that suggest powerful destinies and high fantasy adventure, this game is supposed to be (at least initially) a low fantasy game. This is a starting point for the characters, and who knows what they will do later in life. Think of it as being not the story about the Abhorsen, just a story about an Abhorsen-in-waiting.

Students from the Old Kingdom

The Abhorsen-in-waiting
This character is born to the Abhorsen line; able to walk in Death and keep a delicate balance between the Charter and Free Magic necromancy.

The Royal Berserk
They are one of the Royal line of the Old Kingdom, and posessed of a great rage that can consume them but also give them great physical and mental resistance.

The Charter Mage
Many of Wyverley’s scholars learn Charter Magic, but this character comes from a line of Charter Mages and excels at her craft.

The Necromancer’s Get
Somewhere in the bloodline of this character was a Free Magic practitioner; this is the dirty secret of character’s family, and it has manifested in this character. Like the Abhorsen they have the Death Sight. Why were they sent away — was it to remove further influence to the character, or to protect the family from the shame?

The Sightless Clayr
The sight does not always come to the Clayr, and they must find other vocations. Normally such sightless Clayr are given other duties in their stronghold in the Glacier, but you have been sent far away. What is the reason?

The Heir
You’re from a powerful Ancelstierran family with connections to the government. Great things are expected of you when you return to Corvere after your Northern education.

The Wyverley Scholar
You’re from an unremarkable Southern family; just another girl sent away to learn manners in Wyverley’s famous College. But in your time here, you’ve developed a deep, almost spiritual connection with the place itself — and you probably know more than anyone else about the College and the surrounding area. You can’t think of ever leaving.

The Sending
You look like a real girl. You attend classes, you learn, and you eat, drink and sleep like a real girl. But look closely and people will see that you’re not a human at all — you’re a solid thing, composed of intricate layers of Charter marks swimming over your skin. You know you’re not a real person. Where did you come from, and why are you here?

The Cat
Whyverley has always had its Cat. The Cat goes where it wants, and makes friends with whomever it pleases. It wears a little collar around its neck with a tiny little bell on it… oh, and it talks.

The Boy In The Woods
There’s a local boy who can be found in the woods at the edge of Wyverley’s grounds. He seems to live by foraging and begging the kitchen for leftovers, and for some reason the cook can’t resist him. He knows the secret places around the land, and the old stories that go with them.

« Death comes to Wyverley: (not) Bowing to Authority
Beyond the Wall: Overthinking the Playbook Fiction »