Since last month’s post I’ve managed to cross two games off my immediate wish list (and it looks like we’ll be playing both Kingdom and Apocalypse World in the near future, so things are progressing nicely)

Fiasco and Ribbon Drive are pretty similar procedurally, but with some differences that I think are interesting and significant — so I’m going to talk about them here.

Let’s talk about the similarities first:

I’ll run over my summary of both games first. If you know them, skip ahead to the Comparisons section.

Fiasco is the original poster child of the Indie prepless, GMless, pick-up-and-play RPG scene, endorsed by Wil Wheaton, and now in it’s eighth printing (as of June 2014). 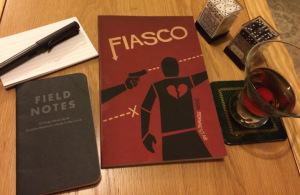 The game is all about setting up a tenuous set of circumstances and then causing trouble. Characters are built entirely from their Relationships with one another, and each relationship focuses on a detail — a Need, an Object or a Location. All generated by random tables, meaning the game really can be zero prep.

This is not what we’re used to. Yes, the characters have individual identities which will be negotiated during the set-up phase, but there are no stats, nothing to tell us how one character might be superior or inferior to another. The resolution of scenes, for good or bad, is a binary choice. When your turn for a scene comes around you may either frame a scene for your own character and leave the outcome up to your friends, or get them to frame it for you but choose your own outcome. That’s it.

This is a game that pushes players to act now and make those acts significant. We only have two scenes each during the first act, and another two during the second. Additionally we’re encouraged to build in the details from our relationships rather than introduce new elements, to keep the focus on the same set of details. Halfway through there’s the Tilt, the thing that changes the landscape — betrayal, mayhem, uncovering dark secrets. At the end there’s the Aftermath.

The actual mechanism is beautiful: two white and two black dice per player get placed in the centre, rolled and selected for the initial relationships, then get used as currency through the game as scenes are resolved by selecting a black or white die (bad or good outcome) and giving it to the person whose PC is in focus for the scene. During the Tilt and Aftermath the totals are rolled with white subtracted from black. When half the dice in the middle have been doled out, that’s the halfway point and the cue for the Tilt.

Despite this beauty, I found the game hard to engage with. Scenes need to resolve, and therefore they need to be set up with cues as to what the conflict is — and more than once we found ourselves with a freeform scene with no obvious good or bad outcome. Negotiating the terms of the conflict up front (what’s at stake, what does each participant want) was the way to achieve a strong resolution, obvious when you think about it — but the need to do this is not totally clear from the game text.

This isn’t the first time I’ve found Jason Morningstar’s books to be a little vague when it comes to scene framing — I recall we had an identical experience when playing Durance. But actually Ribbon Drive suffers from a similar lack of specificity. Fiasco, to its credit, does have good examples that imply the style of play expected.

Fiasco reinforces my view that there’s a tacit component to understanding many of these storygames — some experience beyond the text of the game as written. This information is somewhere, I’m sure — it’s in the www.story-games.com boards and the cliques of convention goers and G+ threads, being passed from person to person almost as an oral tradition. To break into that you either need to be initiated by someone, or infer the framing process based on trad gaming experience, and muddle through until it works.

This is no different from all the different stripes of traditional gaming, it’s just the blind spots are in different places. Mostly it just reinforces just how hard it is to talk about exactly how we play, whichever part of the roleplaying subculture we find ourselves in. I do think that once the art of scene framing is learned there’s a big payoff in terms of bringing that back into traditional GMing, and games like these end up exercising muscles we don’t use often. That’s a good thing.

Avery McDaldno’s Ribbon Drive is about road trips and personal journeys, all set to music. The need for mixtapes (and I’m going to call them tapes from now on, even though we’re a streaming household and my cassette deck is in storage) means it’s not fully prepless, although we tend to be the sort of people who have mixes “just lying around”. 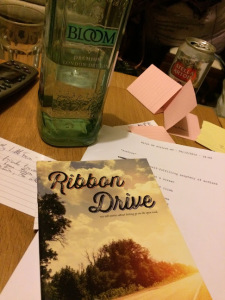 Everyone must bring a themed mix along, with the lyrics to the first two songs printed out. The first thing we do is pick one at random (out of a hat for us) and listen in silence to the first track. McDaldno reckons this part is quite difficult, but we wondered if that wasn’t a consequence of convention play with strangers. If you’re playing with old friends — especially friends who share a passion for the playlist — it’s no big deal.

The road trip comes out of the first mix, including the briefest outline of the party and the reason for the trip. The second song gives the party substance; we take lyrics and turn them into Traits and Futures. Traits are (unsurprisingly) things that define what the PC can do or how they behave, and Futures are what the character expects or hopes to happen (and phrased as a statement, not a question). Both of these attributes should come out in the freeform roleplaying during scenes.

After playing Fiasco where characters are completely defined by the relationships they have with others, this approach felt a little more natural; characters are developed in isolation after agreeing on a central premise, which is pretty much how I would go about preparing for a one-off game.

Then the third track plays, and we’re on our trip. The first person to speak frames the first scene, everyone pitches in as appropriate (as Author, Actor or Director) and at some point someone says “cut!”. The advice on resolving scenes is even more scant than Fiasco, but at the same time I felt there was less pressure to incorporate all the details — I was mainly responsible for bringing my own Traits and Futures to the surface. In Fiasco I felt hemmed-in by the details, but here I felt the opposite — like I could let go and just freeform it, taking cues from the music-as-the-road.

While there’s no details to include and no little pile of dice to work through, we did feel obliged to bring Obstacles into play. If an Obstacle comes along (proposed by the last person to speak in a scene) and no-one can beat it with a Trait, a Detour happens: the mix is changed for a new one, and the next scene happens immediately. This is all well and good except we were so wrapped up in the trip itself that most of the time we forgot obstacles entirely. Reading other accounts of play I don’t think this is out of the ordinary.

Ultimately it’s the Futures that we’re driving towards. But whereas Fiasco’s end conditions are clear-cut — once the dice have been distributed, it’s time to find out just how awful the Aftermath is — Ribbon Drive’s Futures are uncertain. This is both a blessing and a curse. We did question whether we were spending too much time noodling about and not expressing our own Futures as much as we should.

We did break one rule, although I’m struggling to work out what the consequences were. We talked about how long it would take us to get to our destination, and decided we were only a few hours away. That may have changed the end conditions from resolving Futures and letting go to a more mission-based outcome. The actual effect was minimal but I wonder if it would have broken the game had we had that conversation earlier. Still, it was an in-character conversation, so legitimate.

Much as the two games are different from our traditional approach, they have some fundamental differences that shape my feelings about them, too. This is what I could identify:

What about comparisons with traditional roleplaying games?

Fiasco is so radically different from D&D that no real comparison can be made. On the other hand comparing Ribbon Drive with a minimalist system like Everway makes a lot more sense. Both use a small number of descriptive traits, and both use some notion of uncertain destiny which is (at least partly) under the control of the player. Everway even uses media inspiration — in the form of art cards — to generate character.

Maybe this is why Ribbon Drive feels particularly comfortable. In fact the way we tend to play has a lot in common with Ribbon Drive’s freeform approach, including spontaneous invention of facts and events (with GM permission, of course).

T reckons we’d managed to squeeze every last drop of goodness from our very first Ribbon Drive, while we have yet to hit Fiasco’s peak. That’s a fair statement; certainly I don’t think our next session of RD will be better, just different. At the same time while I definitely feel I should play Fiasco again, it’s the next session of Ribbon Drive that I’m looking forward to.

A lot of this is to do with the ritual and joy of creating a mixtape, and our play group are that target audience. While Fiasco is a game I like well enough to play again, Ribbon Drive has been love at first sight.