My last post on the OSR attracted a full-on blog post in reply from Chris Gonnerman, author of Basic Fantasy.

(I’m rather chuffed actually — very nice to know you’ve been read and made enough of an impression to get a considered response, irrespective of whether we agree or not.)

I wrote a few quick thoughts and then parked them on G+, and promptly got the ‘flu. I’m better now. The main quotes I want to pick out are:

Trying to “fix” the classic rules is a mistake.  They aren’t broken… they’re just different.

It’s worth noting that Florian Hübner made a similar remark in the BtW community:

What I dont really understand is why its a problem to have different subsystem doing different things.

I’ve picked these out because I think each illustrates something about the cultural response to (perceived) criticism and advocacy of the OSR.

1. On Being Palatable (and Popular)

It’s true, I did sort of say you could change various moving parts to make it a better game for the modern audience; but stated like that puts a very particular spin on the message — namely that “this game has shortcomings which must change to appeal to modern gamers and make D&D a better game“. That framing is part of the broader edition-warring, blow-by-blow What’s-Wrong-With-D&D conversation which I’ll come to in a minute.

I was actually making the opposite point: namely there is a problem with the expectations of many gamers, based on game design over the last 20 years — skill-centric, unified mechanic, etcetera. The problem the system has is one of image — it’s a goofy-looking throwback with unsophisticated habits in play.

Refuting that was the point of this diagram: 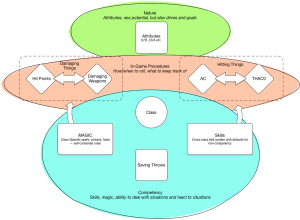 Because a lot of traditional rpgs are (at the character interface) a mixture of Nature (or Gateway), Competency and Procedural stuff; and when you analyse it like that, I don’t think OSR is any better or worse that later modern designs.

Marwood: Give me a Valium, I’m getting the FEAR!
Danny: You have done something to your brain. You have made it high. If I lay 10 mls of diazepam on you, it will do something else to your brain. You will make it low. Why trust one drug and not the other? That’s politics, innit?
Marwood: I’m gonna eat some sugar.

(An aside about Attributes: why can’t we let these go? Rather than dying out the “(Attribute + Skill) Pool” has become the new unified standard of competency. Since it is a competency, why not just ditch Attributes and make Skills one louder? I think they’re a security blanket.)

The hacking section was really a separate point, although reading “this is why some people don’t like OSR” and “here’s how to hack it” in quick succession does lead to inevitable conclusions. But actually the point is that lots of people have already “hacked” D&D in the wake of the 3.5e SRD to get the game they want (DCC, LotFP, True20). This is directly evident in the post-3.5e SRD milieu, but it goes all the way back to… Runequest and Traveller, I suppose (those Attributes again). Of course if you chop and change D&D out of all recognition to get a totally different thing that’s not a hack, it’s a retooling, a dissection, a butchering. The OSR by comparison continues the tradition of house ruling but formally adds layers to tune its sub-systems; it’s still the same (comforting) language.

A lot of these changes are pretty disruptive; it’s fair to say that the end product you get will not be D&D, and that’s a good thing.

That sounds like I’m saying D&D is objectively a bad thing, which isn’t exactly what I meant. What I meant to say was these changes one can make, that the OSR “hackers” have already made, can tune the system to very specific purposes to satisfy a particular audience. In doing so they shed the generic sub-Tolkein dungeon crawling image of “D&D”, a singularity that only really exists in the collective RPG consciousness (as rallying standard for one half of the roleplaying community, and an unspeakable taint for the other half). And good riddance, I say.

Geeks argue, and they argue about minute and insignificant details, often on the premise that they will one day become significant (and eclipse the Sun, etc.). D&D is only one such argument, and I don’t really have a dog in that particular fight — I hope it’s clear that I don’t think the old rules need to be “fixed” or “homogenised”, but rather re-evaluated for functionality. (Do a cost-benefit analysis for your time, of course, or end up polishing a turd).

The thing is, “D&D is Wrong” is endemic to D&D. For evidence you only need to look (if you have patience) at the links supplied by Chris Gonnerman to Mark Hughes’ laundry list of What’s Wrong With AD&D?, and his own rebuttal; a textbook, blow-by-blow dissection of arguments in a very narrow field, the kind of thing that’s ideal forum fodder but swiftly becomes impenetrable and fragmented. It’s not surprising that any attempt to discuss re-shaping and modifying D&D is framed in the same adversarial way, and even less surprising if it’s in a tone of didn’t we have this conversation like ten years ago?

This is geek culture’s oral tradition working; an assumption that the discoveries and traditions and tribal norms are common knowledge, even when the participants could not possibly have been there at the time and are quite bemused at suddenly having this extra context heaped upon them. Is D&D a special case? I’m not sure; I’ll hold up my hand as guilty of participating in similar cultures, though.

It’s particularly strange for me to advocate OSR, given that I’m an outsider both to the US-centric culture and too young to have played back in the day; by the time I came to roleplaying there was Fighting Fantasy, and that tided us over until WFRP (and GW editions of RQ3, CoC, Paranoia, etc.).

So why bother if, as Mo says, you’ve experienced a wide and varied range of gaming?

Clearly it’s partly an academic exercise for me, but even so the way some OSR stuff is attempting to get back to literary roots is compelling. LotFP’s emphasis on Weird Tales, DCC’s back-to-Appendix-N ethos and (my favourite) Beyond the Wall’s focus on YA fantasy such as Earthsea are all fine. Note that these are not just varying the tone, but backing the tone up with mechanical reinforcement. A lot of the achievement is finding functionality and clarity of purpose where previously the base looked a bit messy and incoherent.

I’ve also got to think of what in OSR appeals to people ten or even twenty years younger than me. There’s this problem of inherited history, of course; but at the same time the map-making (check out the Library of Gaming Maps!) looks tremendous fun. But mostly I wonder if it’s just a countercultural rejection of shiny, corporate Dungeons and Dragons(tm). It’s a simple answer that makes sense.

« Who’s Afraid Of The OSR?
Addendum: Brief Comment on Attributes »