Edith and Freddie Go To See The Harlequin

I said before that Over the Edge was the game I should have been running in the 90s instead of Mage. I also said in my #RPGCoverArtAppreciation contribution that I really prefer the 1e cover to the 2e. It’s surprisingly hard to find examples of the 1e cover of a decent size, so I was pleased to stumble upon this short-lived blog with a nice big version: 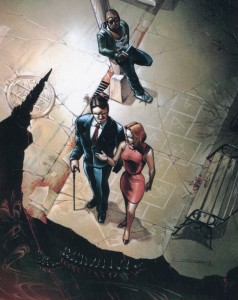 Based on the credits in the Player’s Survival Guide I assume the artist is Douglas Shuler, whose art turns up on a lot of the early Magic the Gathering cards (including the Serra Angel).

Anyway, this is why I particularly love Over The Edge’s cover: 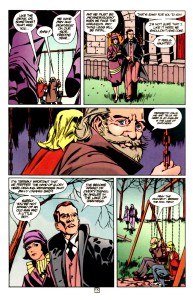 That’s Edith and Freddie from the Invisibles V1e3, being observed by Tom O’Bedlam and Dane from the swings. Which, incidentally, you can now own in this monster of an omnibus: 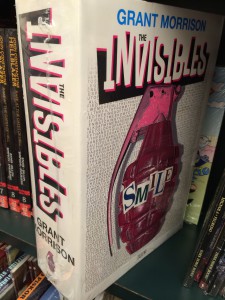 Anyway… I don’t think I ever wanted to run Mage. I wanted to run The Invisibles, The Naked Lunch, Lost Highway, Sapphire and Steel.

I certainly didn’t want to run this: