The Free and the Dead

This is part of a series of pieces for Death Comes To Wyverley, a playset for Beyond the Wall inspired by Garth Nix’ Old Kingdom series. This should be considered a fan work.

An OSR game is nothing without “monsters”. In DctW there are four types:

I’m not going to bother with stat blocks, because at the very least anyone reading this will have the excellent BtW bestairy (and probably plenty of other resources, too). Instead I’ll just suggest the different resources you might want to use for each category.

There are two different types of human antagonist. From North of the Wall there are Necromancers and other Free Magic users. South of the Wall, human antagonists could be bureaucrats from Corvere who have Ancelstierre’s security at heart; they think they’re heroes and protectors, but their ignorance and zeal makes them monstrous too.

Necromancers and others will probably threaten by being the source of some ritual magic or change in the landscape (most obviously the Dead rising). Bureaucrats may work a little differently, being able to enter Wyverley itself and upset the various relationships there, restricting access and imposing curfews, etc.

Wild animals who are territorial, hungry, or otherwise hostile to people and cannot be reasoned with.

Wyverley’s surroundings are rural farming land with a lot of natural space and places for animals to make dens. Wild animal populations will not be controlled as effectively as they are today, and a lot of this rural area will be unlit at night. Animals will pretty much only form threats when the characters are travelling, unless something very odd happens like wolves appearing on the Wyverley grounds.

Note that the Dead can be forced into the bodies of animals (e.g. Gore Crows), so animals behaving strangely may turn out to be animated corpses with a Dead spirit providing impotus.

The Dead are one of the two classes of true “monsters” in the setting. Dead creatures — whether Greater or Lesser Dead — originate from human souls who refuse to accept Death, or from Necromancers who have called those souls into a body in Life. There are a number of different Dead described in the books. The main resource for these are the Sabriel page on Wikipedia and the Old Kingdom Wiki.

Stat blocks and special powers can be drawn from any undead bestiary — the ghoul, spectre, lich, sluagh, spirit, wight, vampire and the Nameless One and various demons from the Beyond the Wall main book should do well for lesser and greater dead with a bit of cosmetic tweaking. The common feature of all these monsters is they were once human, even if they’re horribly misshapen.

Creatures of Free Magic (elementals and such) are weird and alien, and frequently dangerous to humans. There aren’t many descriptions of Free Magic elementals — here are some from the books (courtesy of the Old Kingdom Wiki):

Plenty of fantastic creatures from the BtW or other bestiaries can be re-purposed — possibly changing the shape of the creature as the GM sees fit. Clearly there’s a precedent for mythical beasts such as dragons, cockatrices, unicorns and others to have existed, so a mythology that refers to these creatures is reasonable. Other resources you could try include the vast and detailed Summon spell in Lamentations of the Flame Princess Rules and Magic book. In general: 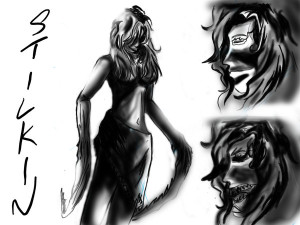