Here are five things I really like in the OSR right now:

Further Afield is a supplement for Beyond the Wall. This book takes the low-prep, village centred concept of the game and inserts similar tools for campaign play including Threats (and Threat Packs), locations (and the way they are discovered by the village), and a campaign hex map. There are alternative rules for experience, rules for making characters a bit different with Traits, some nice treasure tables (in keeping with the flavour of the character and scenario tables) and expanded sections on magic and magic items.

Basically if you like Beyond the Wall this is more of the same, only with a wider scope. Lots to like, no filler, a bargain price. 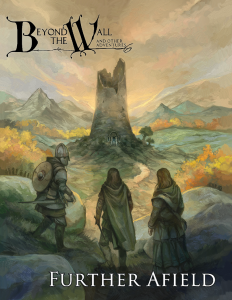 Mostly the contents are subjective GMing advice on making magic items unique, running good adventures, creating creatures and generating a weird and gothic tone. If that’s your thing — particularly the last bit — this is worth a read through, as there’s not much system jargon, just good and opinionated advice. I’ve already got the dead tree version but it’s nice to have it on my tablet, particularly for bookmarking and annotating. Plus, the Grindhouse edition uses that medial s which we love. 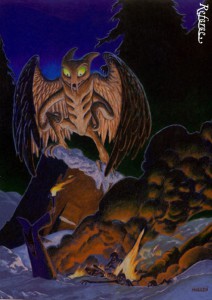 This is an incredibly light (48 pages including adventures, random tables) and fast (3 attributes for all checks, simplified levels, simple combat) and flavourful (arcana, weird places) OSR game. There’s a claim somewhere about a party going through 21 rooms in 3 hours, which is vastly different to my experience playing the Worlds Largest Dungeon with 3.5e.

This is the sort of thing you’d expect from mashing up Lamentations of the Flame Princess with Marcus Rowland’s Forgotten Futures, with maybe a dash of Everway.

I love the weird art, the font, the terse style, the sheer amount of value packed into 48 pages. Every Odd home should have one. 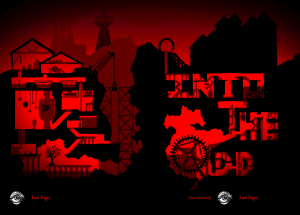 Kevin Crawford’s game of DIY Lovecraftian horror is obviously awesome, containing a wide range of tools for crafting a strange modern mythos your way. I like to build and play in my own worlds, and a toolkit is much more welcome than someone else’s world. Silent Legions contains some of the innovations found in other Sine Nomine publications such as location tags for your sandbox.

But I’m specifically excited that, thanks to reaching one of the Kickstarter stretch goals there is not only a pdf (which I can take or leave) but epub/mobi versions as well.

I know that not many people will care about this, but I like my Kindle. It’s very portable and I can read it in sunlight and adjust the font size. OK, I can’t view the art on a Kindle but for the first read through I just want the author’s words and ideas. I don’t care about the layout, the art, making annotations — save those for my second and third read-through when I’m dipping in and out of the text.

I wish more producers did this. A lot of people dismiss ebooks as inferior to a hard copy, and I wonder if those people are lumping epub and pdf together. I appreciate that it may be a pain to create that document (I’m sure tables are a real hassle) but for me it really adds value, my reading speed goes up, and my retention of the text gets better. I can’t be the only one. 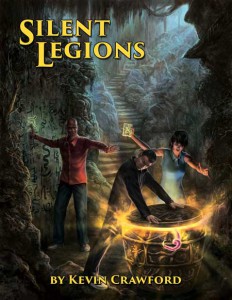 Not a product, at least not yet; but something that should be celebrated and talked about. The next version of Swords and Wizardry will have an all-female art team led by Stacy Dellorfano (founder of the Contessa online convention) and featuring art with women and people of colour in iconic roles. According to the Dorkland article there will be a Kickstarter for that edition in the summer, hurrah!

I’ve not read into the S&W system too much but I do like the covers, e.g. the Whitebox cover by Pete Mullen and the Erol Otus cover on the current Complete edition: 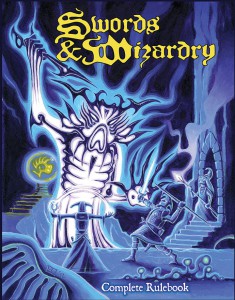 The style makes me think of Beyond the Wall, with a bit more whimsy or liminal overtones. It will be cool to see what direction the new team takes with the book.