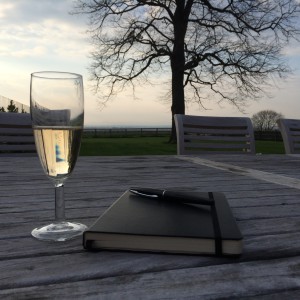 The game I wish I’d played but didn’t was another run through Liz’ Rise and Fall, this time with a fat-shaming dystopia involving doughnut quotas, cupboard inspections, and the first public eating of chocolate on TV for a decade.

Less fun was being laid out with the ‘flu for a day, which severely got in the way of drinking:

For the Gimlet just take the juice of a lime, 2 measures of a nice gin (I use Blackwood’s), a measure of 50% sugar syrup, a few drops of Fee’s Orange Bitters, shake with ice and strain.

For the French 75, juice a lemon and add a measure of gin and one of sugar syrup, stir a bit, then add lots of ice to a tall glass, top up with fizzy wine (cheap Cava in this case), add a cherry, lemon slice and straws.

(there are lots of different ways to serve this one but the over-ice method comes from my classic cocktails book. It’s like a poncy Tom Collins) 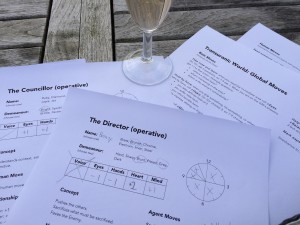 This was the first game I ran, and it went OK but clearly needs work — so it was good to playtest before the next outing which will be at 7 Hills. The premise is Sapphire and Steel, Powered by the Apocalypse. So far I haven’t looked beyond one-shot games, but creating a longer term Front for play that links Agents and The Enemy over different missions shouldn’t be too difficult, and PbtA’s concepts of Clocks and Threats are just what I needed.

I think the players thought the Human would be boring. Certainly if you were offered the chance to play either the supernatural Steel or Sapphire, or one of the many humans that end up as collateral damage, it’s an obvious choice. However when we came to play I was pleased that the human had plenty to do, although I should have made more of her Local Knowledge / Historical Context powers.

The PvP aspects of the moves weren’t really explored because that mode of play wasn’t really familiar to the players (none of whom had played PbtA games). But also the game had a strong mission focus that meant inter-party fighting wasn’t part of the fiction.

As you’d expect from an investigation game a lot of the first moves would be observation in order to divine where the next clue was. In keeping with canon the Sapphire PC had plenty to do, and spent most of his time reading the situation and opening his mind. The Silver (Engineer) and Steel (Director) PCs had less to do by comparison, although both had fairly strong abilities. I was also a bit surprised at how much fighting went on in the end stages — so clearly this is another place some playbooks can be expanded and reinforced, which is good.

A few powers didn’t work, like Sacrifice (because the exchange rate of Harm for Help was not good). Also while Hx should have come into things with Steel ordering the other characters around and helping them or being helped by them, the actual Hx values I assigned were too low to be helpful. I think I mistook Hx for being liked. That’s another fix.

The most gratifying part: the players said it was true to the genre in their eyes, which is what matters above all. I think apart from the minor issues of some moves not making sense I’m not in too bad shape for the next run through. 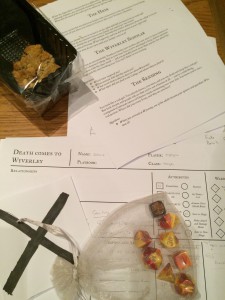 I ran my modified version of Beyond the Wall on the last day. Much more within my comfort zone than Transuranic World. Nevertheless the game was still a playtest, as in I wasn’t just running a one-shot but a reusable game pack. Any mechanical changes I’d made needed to be solid.

The first problem was time; despite planning the playbooks last year I’d still only half-finished them (excuses, excuses; lots of foreign travel and stress). The common tables for nearly all the playbooks are done and got used, but the others are still in progress.

Since I didn’t have time to present them in the state I wanted, I improvised a bit of storygame-type character generation which I now submit as an alternative and systemless approach. It goes like this:

It took a bit longer than the standard method and there was afterwork required by the GM, but it worked really well. The links to the playbooks overview and common tables are provided at the bottom.

Other things I worked into the game:

The main problem I had was the constant switching between roll-over (to hit and saving throws) and roll-under (stat checks for skill rolls, etc.). It’s something I’ve always had a problem with in Beyond the Wall and I’m not sure how to fix other than by the group just getting familiar with it.

The next change I intend to make is with the damage system, using Armour as a damage reduction mechanism — reducing the roll on the dice before damage is calculated. Even 1 point of armour will have a 1 in 3 chance of reducing the damage taken.

That deviates further from the standard D&D AC model, but that’s a trivial fix. Just create a Dodge attribute that rises with the levels in line with wearing better and better armour, and use that value in place of AC when a monster rolls to-hit. All you’ve done is change a class attribute from being externally regulated (by class permission and money) to internally (by level).

The other change I’m considering is to the character’s levels, possibly to remove them entirely. However as clunky as levels appear actually I think they work really well. Superimposed over the college system they could work in-fiction, too.

Useful links for the game so far (links to pdf docs):

« The Nixian
Five OSR Things I Like Right Now »