Blowing Up The Movies: Punch. That. Shit! 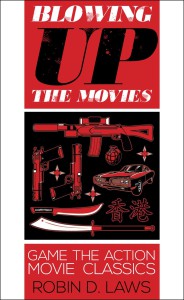 Thanks to the phenomenal success of Atlas Games Feng Shui 2 Kickstarter the companion ebook Blowing Up The Movies achieved all of its stretch goals, covering a wide range of action movie genres from both East and West (including at least one film that the author didn’t want to cover).

I’m a big fan of Robin D. Laws’ conversational style both in speech (the excellent Ken and Robin Talk About Stuff podcast) and in print. I got on particularly well with his style in Hamlet’s Hit-Points, so if you do too, you can expect more of the same from Blowing Up The Movies.

As such it’s possible to read the book as a critical analysis only (and enjoy it!), but since this is a companion to Feng Shui 2 Laws is already preaching to the choir. Some of the titles were selected by backers and the rest will make up the core of the typical action cinema fan’s DVD collection, making BUtM one big gratification beat where the reader can smile to herself and nod in agreement with the author.

The essays typically home in on the selected movie’s defining points, narrative structure, symbolism and political/historical context &c. Laws then drops in hints for FS2 GMs on how to take those moving parts, motifs and themes and make them work mechanically with that game. This part I could take or leave — most of the time if I’m invested enough in a genre to run it, I’ve selected/hacked a system to represent it. More interesting were the suggestions for melding the action with two of Laws’ other games: Hillfolk (for a drama focused game) or GUMSHOE (for a detective game). The mechanical mis-matches were kind of glossed over, but the principle is good, and the section on melding detective work with action (Detective Dee and the Mystery of the Phantom Flame) is one of my favourites. And naturally Laws is going to pimp, I mean turn to his other titles when considering system.

The essays are short, incisive and mostly positive (one exception being Equilibrium, the film Laws didn’t want to write about, but it’s a good essay on what not to do when pacing your plot). The staples of Eastern MA cinema are there (Hard Boiled, Once Upon A Time In China), the modern cinematic nods to the Wuxia genres (Crouching Tiger and the slew of films in it’s wake) and a mixture of obvious and less obvious SF (The Matrix, Equilibrium, Star Wars). There’s also Die Hard which Laws declares “the quintessential 80’s movie” which would make a certain friend of mine happy. Me, I was over the moon to see Hot Fuzz in the list.

In summary, if you like Feng Shui it’s a must-read, if you like action cinema it’s great fun even without the game, and if you like Robin D. Laws it’s more of the same.

And it’s in a device-friendly format (epub/mobi) too, so it gets bonus points from me. If only the Feng Shui 2 pdf were in a tablet-friendly or even a print-friendly format… one of those would be nice.

« On Violence
In Loving Memory: Everway »