Remembered with Honour: Lace and Steel

For part 2 in my series of games that time forgot, here’s Paul Kidd’s magnificent Lace and Steel. 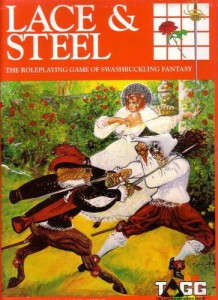 We’re not short of swashbuckling/Early Modern RPGs — off the top of my head I can think of Flashing Blades, En Garde!, Swashbuckler!, GURPS Swashbucklers and All For One for Savage Worlds, and 7th Sea — and by stretching the definition we can cram the likes of Castle Falkenstein, Duty and Honour and Renaissance in as well.

So, if you want to get your swash on there are plenty of titles to choose from — why then would you choose an obscure Australian game from 1989?

The swashbuckler is the most rigidly conventionalized of all the subgenres of the Adventure genre, and one with close affinities to the Historical Fiction and Romance genres as well

Whether or not you agree with that quote, the swashbuckling genre has some key elements that most players will expect: historical elements, class division, codes of honour, and a certain blend of adventure, comedy and romance. The party will be good and daring and probably outside the law, though still bound by some class conventions; and the villains are dastardly and deserve their comeuppance.

A lot of the time genre emulation is primarily via setting fluff and what the GM and players bring to the table — so roleplaying to the tropes of the genre is part of the social contract. Games that are designed with swashbuckling in mind may pay lip-service to fencing mechanics and social climbing but in the end GURPS Swashbucklers will still smell of GURPS.

What I like about Lace and Steel is its mechanical support for the genre. It does duelling very nicely — swordplay, magic and verbal sparring all use a card sub-system. But the interpersonal mechanics (Ties and Antipathies, and Self Image) are also very good, and include some pretty tight design. Outside the sub-systems I can take-or-leave the general mechanics, which are actually a bit cumbersome (subtract a stat from a difficulty, roll dice and subtract skill, cross-reference the result is all a bit unnecessary).

The setting material does what I like best — it keeps things brief and to the point. No doubt there would have been a lot more had the line taken off, but I am OK with the terse descriptions of the various nations, and the brief passages on daily life, religion and ecology. But most of the setting is implied in the mechanical sections on magic and warfare — suggesting that the typical campaign will always feature conflict as a backdrop, if not a direct game feature. There are rules for mass combats, naval combat, and so forth. This is ripe territory for intrigue, spy games and other staples.

Let’s just briefly mention Donna Barr, who is credited with the interior B&W art as well as the cover of the first edition, and the art for Castle Keitel (note that the reprint cover was by David Cherry, though the interior art is unchanged).

This is possibly my favourite interior piece: 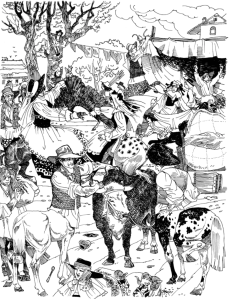 You can see some examples here and read a blog piece on her here. 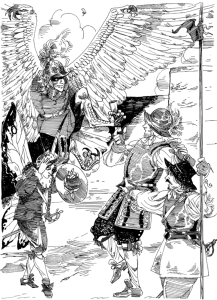 I think Barr did Stinz around the same time. The centaurs in that comic identify as “Half Horse” and that term also crops up in L&S (as well as the slang “two leggers” and “four leggers”). Since the original novel for Stinz dates from 1981 I guess the term originated with Barr and was appropriated by Kidd. I’d like to know if any of the other geographic features in the world of L&S originated in Barr’s comics, too. Either way I love the implied continuity between the two works.

A fantasy 1640s could have ended up with a sub-Tolkien melange of elves and dwarves, but instead it ended up with Greco-Roman influenced Satyrs, Harpys and the Half-Horse. Humans and Half-Horse are the “civilised races” with “wild races” living on the fringes of civilisation in their own communities. Then there are the Fair Folk and “halflings” (again not a Tolkien reference but a term for pixies, trolls, goblins and such, similar to its use in Jack Vance’s Lyonesse).

So, superficially Kidd has just exchanced poiny ears for cloven hooves and horns. But the interesting thing is not the choice of races but the way they’re grouped. The “civilised world” is explicitly mixed-race (human and half-horse) and it’s clear that the “wild races” are welcome in the cities and trade freely, they just prefer their own communities. With the implication that the world is expanding and becoming more civilised, these tribal wild communities are in the minority. The national boundaries described later are for the civilised world.

This gives me all kinds of ideas of how the wild races coexist and are influenced by the various conflicts in the civilised world. A lot of Tolkien-formula fantasy settings segregate by race in what feels like an arbitrary fashion; somehow this arrangement feels more credible.

The only bit that’s slightly peculiar is the half-horse habit of wearing human clothes on their torsos but going unclothed on their hind-quarters, and being embarassed about it:

Half-Horses wear clothing on their upper bodies, and four legger women wear apron-like skirts. The equine hind-body is never clothed or armored, and this lack of covering can be a cause of embarrassment. Many a love-sick young male has had to hide his nether regions upon contemplating the charms of his sweetheart….

The rest of the setting is pretty much as expected: a fantasy post-medieval Europe with the serial numbers filed off and various national grievances to ensure someone somewhere is starting a fight. There are sections on war technology, social life, language, ecology. Magic is treated like a group of skills, organised into schools like Alchemy, Necromancy, and so forth (but only Sorcerers able to cast missiles and engage in magical combat).

Interestingly the religion is explicitly Christianity, but with a certain amount of tolerance:

The end result is a church which contains some elements of earthly Catholic ritual, but with a level of toleration, debate and variety which is closer to that of the early Christian church. There is no belief in “saints”, no inquisition and no blots on the clerical conscience such as the Albigensian crusade. The wars which are being fought all across the continent are the result of dynastic ambition, rather than a clash of religious dogma.

A duel is not warfare, it’s not a brawl, it’s not a back-alley assassination. Duelling implies feelings of propriety and fairness, codes of honour, and above all a way to settle a dispute between two persons without interference from organisations or government.

But the principals are not the only ones involved in the fight — the audience is part of it as well, rooting for one side or the other, biting nails and clutching lace hankies to their mouths (both in-fiction, and outside). Formal duels set the stage for conflict — the insult, the challenge, the stakes and the outcome — and thanks to this transparency the audience is aware of what success or failure might mean.

The card system does the mechanical fighting part very nicely. It’s easy to learn but with surprising depth — attacks and defences run on the upper, middle and lower lines, with a few special attacks, a gradual attrition of hand size due to fatigue, etc. It’s also very transparent to other players who aren’t directly involved in the combat. 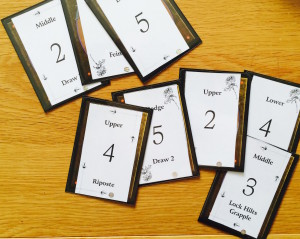 As a fencer I can say this game feels like fencing. “Initiative” means one side attacks and the other defends (as opposed to both sides attacking), until they can take back the initiative from their opponent with a decent parry. The matching or mismatching of suits (rapiers and roses) adds an element of luck for who gets to draw new cards, and the desperate defence, disengaging and stop-hits all feel genre-appropriate and representative. Additionally, player skill and the luck of the draw come into the game in a way that dice rolling does not. It’s possible to be out-fought if you have a bad day on the cards, even if your PC is better at fighting. Fights are not and should not be taken lightly even if the stakes are to first blood.

Repartee is the social equivalent of swordplay, and uses the same deck with damage done to Self Image rather than physical wounds. It’s not covered so well in depth, however, and I wonder if it was only included as an afterthought.

Magical duelling gets its own deck. The conceit here is that sorcerers are walking magical artillery; engaging armies need sorcerers to protect themselves from the opponents, as only the sorcerer can build up the magical protection to ward themselves in a duel. Much of the sorcery duelling is about building a defensive wall and knocking your opponent’s down. Other differences involve playing more than one card in attack and defence with an initial play face up, and additional cards face down to make bluffing possible. 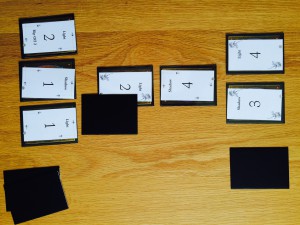 Whichever kind of conflict, using cards in a sub-game flags three things to the players:

The other very nice mechanic in this game is around relationships between characters. Ties are positive and Antipathies are negative relationships:

A tie is a feeling of friendship, loyalty, respect or duty towards a person, a nation, a group or an idea. An antipathy is a feeling of distaste, disgust or aversion to a thing. Ties/antipathies are treated very much like skills, being given a rating of zero or more. This rating is termed the tie or antipathy’s strength.

Additionally we have Self-Image as a kind of social hit-points (applied as a modifier to all Charisma and Drive rolls), and the Disposition of a character is derived from a draw of a Tarot deck to establish the character’s Significator. The overall section on Interpersonal Relationships is brief but absolutely killer, including

In broad terms, how a character acts on their ties towards a person, ideal or nation will drive their sense of self-worth. Hmmm, that sounds familiar. It’s not expressed in such depth as the Burning Wheel BIT system, although it also doesn’t involve the whole “Artha” economy and the post-session popularity contest, and it’s way simpler. I count that as a plus.

Lace and Steel presents a sort of fantasy Age of Reason with both setting details and genre-appropriate mechanics — but although the setting is explicitly fantasy 1640s, it could cover an era anywhere between 1600 and 1800. Some things stay the same: attitudes to duelling would not change much, though the technology will be different (the rapier transitioning to the small-sword, etc.), and there will still be a backdrop of political and military conflict. But where would the Wild Races be a hundred years later? Would attitudes to magic and religion change?

It’s a sad thing that Everway will (probably) never see a new edition, but I can at least understand why: that game will never be cheap or simple to make, and a small fanbase makes sales uncertain.

Lace and Steel has no such excuse. The electronic rulebook and cards were available from OneBookShelf until the mid noughties when they were mysteriously withdrawn from sale. Golden Elm Media (formerly Electric Mulch) has a Lace and Steel page but no way to buy the product. Paul Kidd refers to his game on his Squeee!!! site (although that looks like an old site — he’s currently at PaulKidd.net where he mentions RPGs, but no L&S). Right now the only place you can find the rulebook is on Scribd, which I have mixed feelings about. But the electronic copy is there, with “Copyright 1998-2003 Pharos Press” (publishers of the late 90s reprint) and the old Electric Mulch URL. If any reader knows why the digital version isn’t on sale, I’d love to know.

4 thoughts on “Remembered with Honour: Lace and Steel”