Trad vs Indie is the chosen subject for the first episode of the What Would The Smart Party Do podcast. I think this topic is pretty well-worn by now, but there’s some good stuff — highlights for me were:

I’ve had a few rounds of discussing indie games with friends, and since some of those friends are Live Action / Freeform enthusiasts the discussion turns to the similarities between Freeform play and the improv-styled Indie stuff. And in some cases Indie titles are not like Trad games at all, but they’re similar to Freeform games.

At the same time it’s not enough to draw a line with Indie at one end and Trad at the other, and Freeform games in the middle. The improvised nature of Freeforms makes it a third degree of freedom — I give you the Trindie Triangle: 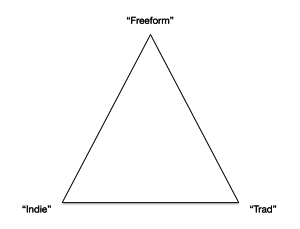 On the left we have Indie games — GMless, scene focused, story by consensus and “play to find out”. On the right it’s Trad stuff with the GM-led, plotted, mapped, and bounded by wargame-like mechanics. And up the top there are the Freeform aspects — which to the Indie side represent the improvised nature of the game, but on the Trad side they represent those apocryphal sessions where no dice were touched and the party just spent three hours in theological debate.

These three points are extremes — they don’t describe real play, or real habits. Even if a game is designed to be right in the corner, player and GM habits are likely to shade the game away from the corner and towards the other modes. The significant part is each of the three relationships represents a behaviour: 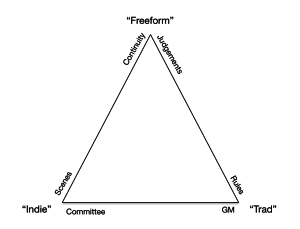 Ribbon Drive is held up as an Indie example. If we compare it to D&D it’s clearly the antithesis of corporate, supplement-driven RPG consumption and play — a little pamphlet that’s short to read, a game that’s short to play and very focused on a single activity, prepless and GMless. It’s loosely scene focused, and highly improvised, but it’s also fairly continuous in its presentation — in other words, there are no real breaks in the road trip. Most of the time players are in the actor stance (despite also having authorial responsibility).

Now, compare Ribbon Drive to the poster-child for storygames, Fiasco. The latter is also scene focused but it’s also discontinuous — the narrative jumps from scene to scene, and during called scenes other players are roped in to play NPCs as needed. In other words, there is no actor-stance continuity, although certainly there’s pressure to incorporate or call back to events from previous scenes. Everything in Fiasco drives scenes to make decisive conclusions (and consume black or white dice), which is not the case in Ribbon Drive.

Another game which is Indie but entirely unlike Fiasco is When the Dark is Gone; it’s a group therapy session that’s constrained by time, effectively one single group scene (but one where the facilitator ensures all the characters speak for an equal length of time). It’s continuously presented — there are no scenes to present gaps in the narrative from an actor POV — and therefore it’s much more like a Freeform LARP game than a storygame.

With that in mind, you can start to place different games on the triangle. Some interesting results come out: 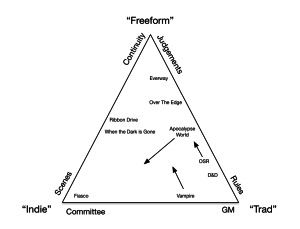 I’m sure there are more degrees of freedom, and better diagrams to express them — but hopefully you get the idea.

I’d like the chaps to expand on their opinion that some modern games like Numenera and 13th Age try and fail to be “Trindie”, that they “don’t get it” (although it’s an academic question since I’m never going to invest in either game).

Finally, here are my own Trindie candidates:

« In Loving Memory: Everway
Remembered with Honour: Lace and Steel »