Hand To Hand With The Blue Bastard

I planned a creative update a couple of weeks ago after finishing the Death Comes To Wyverley playbooks, but Nine Worlds got in the way (and jolly good it was too). This is what I said I was working on back in November:

So these are the updates.

Is a thing. Not done, but a functional thing, functional enough for me to use and maybe for other people too. I will use it, maybe after cementing some of the rules tweaks. There may be a version 0.2 release (around the time I run it next), but not for a bit.

I play tested this a couple of times, it went OK, but I’m not quite feeling it. For three reasons:

I’m putting this on the regret list, which means indefinite hiatus. But, you never know.

Yeah, I hate that title, but the problem was I could never think of a better one. And the reason for that is this game has always been a set of mechanical principles, but the actual game in all of it has been elusive.

The good news is, I now have a functional game premise and core activity for the PCs to actually do. The working title is Black Mantle and I’ll be playtesting in the Autumn. It’s a dystopian future city, with mecha. Sort of like The Hunger Games meets Knights of Sidonia.

The funny thing about this one is for the longest time I vacillated about what system to use for the character parts (that the city part plugs into). I went around in circles for a bit, going between variants of WaRP (which are still viable for another project) through my own version of Everway, before finally settling on the d20 OGL for a portion of the system. Not something I would have expected a couple of years ago, but working on DCtW involved coming up with a few system tweaks that just seem to work very well and evoke the right level of survivability, so that’s a good basis.

And that’s the adventure portion. Last year I went on at length about heroic cycles and mono-myths and how they relate to Beyond the Wall — and while that was probably more interesting to me than anyone else the principle remains the same: outside and inside the village are two different environments, and should be two different roleplaying experiences. So the external stuff will basically be OSR mecha as werewolves, nothing heavy or too crunchy — I’d like GMs to be able to plunder their monster manual and apply a genre-appropriate reskinning. And the internal stuff will be… something else. And the two have to fit together, which is the design challenge.

These are the projects I have sort of on the back burners for when I feel like a break or when I’m travelling on business and need something to do in the evenings. 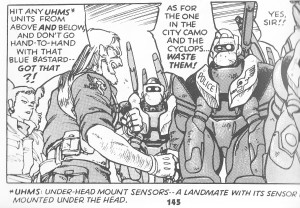 « I Tried Your Setting, It Was Awful
Three Different Decks »