The Smart Party Does OSR

This week the Smart Party tackled the OSR with Daniel Sell, creator of The Undercroft.

I’m with Dan on two points: the Renaissance portion of the monicker (it’s a cultural movement), and coming to the OSR late. D&D was available when I was a kid but it was also displaced by Fighting Fantasy and WFRP (which are my old-school games) so didn’t get a look-in. I also don’t have a beard to stroke or the nostalgic feelings towards BECMI D&D (and I reject the general assumption that the OSR is looking backwards).

So, positive things about Teh OSR:

OSR games are no more reliant on GM/facilitator skill than any other traditional format game. The idea that more complex games can excuse lack of skill through rules is dodgy — really you’re playing a different kind of game if you’re just pushing counters and dice around the table for an hour. My experience is that GMs do the opposite, if the rules are too complex to fit seamlessly into the game, it’s the rules that get ditched in favour of common sense.

OK, while we’re talking about OSR and assumptions, I just dissected an old LotFP game I ran with Josh (Black Armada). During that game, Josh’s character lost both feet to standing in a field of slime (which had been eating the farmstead’s cattle from the hooves up). I set that up because I wanted characters to lose limbs and have other horrible things happen, and see if the players continued to treat their characters as disposable pawns and roll a new one, or persist with their PCs. There was actually little in-game debit to losing a limb, and it hasn’t stopped the Flame Princess adventuring. 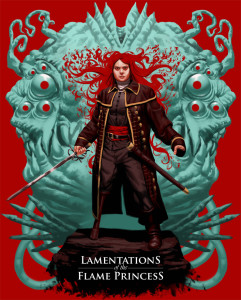 Josh’s assumption was the PC was no longer playable; but there was nothing to prevent him continuing to play that character. Those assumptions are maybe fair given we have a legacy of dismemberment tables in WFRP, etc. But those assumptions like many assumptions about the OSR need to be challenged; there’s a weight of gaming propaganda that continues to say this style of game is all about disposable characters and casual murder for treasure, and that’s just bollocks.

Then we talked about the effect of disfigurement in other games that suddenly make players no longer want to play. This is not a functionality issue, it’s an issue of player self-image projected onto the character, (as well as the perceived value of a 1st level character in D&D). It’s not an issue of fairness or functionality.

I don’t see this enforced change on the character in D&D as any different from, say, a forced change to Darkest Self in Monsterhearts. That’s the game world and other player’s fiction intruding on your own character, and it’s a good thing. It forces you to change and adapt.