My first taste of Stormbringer’s demons was with The Madcap Laughs in White Dwarf back in… whoah! 1987. This was just after WD had become a house magazine but before they ditched the roleplaying to focus on Warhammer and miniatures. 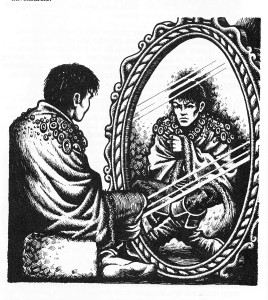 This was the third edition of Stormbringer (the Games Workshop printing with the Peter Jones cover), which wasn’t much different from the first two editions. Before then magic had been D&D’s spells, point-and-click magic, and the idea of a sorcerer’s power being invested in a demonic proxy — a proxy with form, and personality, and a relationship to the summoner — blew my mind.

The fourth edition (Michael Whelan cover) spoiled demons. They were no longer summoned based on function (combat, desire, etc.) but instead build up with a point-buy “chaos value” and “demon breeds”. This change made them impersonal, no longer unique, relegated to pick-and-mix monsters. That persisted through the fifth edition (aka Elric!) but by then the magic system was watered down with RQ-style spells.

Later, Mongoose’s Elric of Melnibone went back to using the terminology from Stormbringer 1e to describe demons — so maybe the authors Green, Whitaker and Nash agreed with me that the earlier version was better. But that product had god-awful black-on-grey and multiple font printing, so was nearly illegible.

Anyway… what follows are some ideas for translating SB3e style demons to an OSR/d20 system. I like this for a complete replacement for magic spells; if you want the same spell effects, the demons become containers for the spells and cast them on behalf of the caster. This first part is an overview, with mechanics to come in part 2.

Demons have the following descriptive bits:

Beyond the Wall has rules for True Names of things (though it’s loose on where they originate from — should be part of the cosmology, see below). It’s up to the GM or group whether demons give their masters their true names, or just their common names.

Is the demon’s True Name known to the conjurer? Three options:

Yes, because that’s how the magician summons and binds a demon. This implies that there are demons “out there” with names that can be discovered by certain means. This implies a sort of otherworld that the demons come from, which may have a hierarchy or may be unstructured or chaotic (like an ocean where the big demons prey on the little ones)

Yes, because the True Name is given to the demon by the magician. This is the subjective demon-as-conjurer’s-personality version. This also implies that if the True Name is discovered by someone else then that person could have power not only over the demon but also the conjurer.

No. The magician summons the demon and the demon offers services in exchange for a relationship that fulfils a need; the True Name is kept back by the demon. If the conjurer (or anyone) discovers the True Name of the demon they will have complete power over it; for now, the conjurer just has a contract for services rendered. This version works best where there is an otherworld hierarchy, i.e. the demon has status or a role to fulfil in the demonic/angelic ranks. Maybe they’re offering their services on the side.

Stormbringer’s official dogma is that demons come from other planes where the owe fealty to the Lords of Chaos. But sorcerers are self-serving and deceitful individuals with a warped sense of reality, and we only have their word to go on.

There are no answers for these things. There is no language to describe them. There is no identifiable pattern. There is nothing to learn. Summoning skills are intuitive acts of luck and will by isolated individuals, each with their own answers (Sorcerer)

Campfire tales and folk religion that finds answers for demons from the landscape, placing them in the context of a wider but diffuse spirituality in balance with the land, varying depending on which wise woman or priest you speak with. Demons are a bridge to the natural and spiritual world; some may be guides. Opinions vary from village to village (Beyond the Wall)

Large-scale collective beliefs, but no supremacy of any one; rival organised churches with clear heraldry and iconography; organisations that leverage the benefits of demons; negative associations are balanced with power and wealth (Stormbringer)

Demons have needs (Sorcerer, before then Elric!/Stormbringer, though not so well developed). These needs seem random. Alignment can be a guide:

Needs are satisfied by the Relationship with the conjurer. 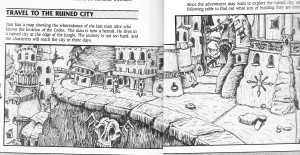 Stormbringer 1e has six different Kinds of Demons. The Kind says nothing about the demon’s appearance or origins — it’s all about the Services the demon provides. The taxonomy is according to function (i.e. what it can do for the summoner) rather than “breed” as in SB4e and later.

I’ve mapped each demon onto a specific attribute — demons should work as Relationships (also I will work in rules for Harm). This may also be specifically useful for Whitehack. In part two I’ll talk about the mechanics. 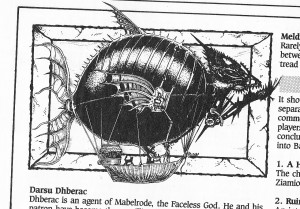 « Preface: Demons
Nihilism, Cthulhu and Me »