We’ve got our 15th session of Apocalypse World coming up next week, and while I love playing PbtA (and the group I’m playing with) I’ve found it a real struggle being the MC.

Anyway, Urban Shadows is me breaking my rule about no more rpg pdfs you will never read. The Halloween sale and the promise of an epub version tipped the scales. It’s post-WoD urban fantasy, Powered by the Apocalypse. 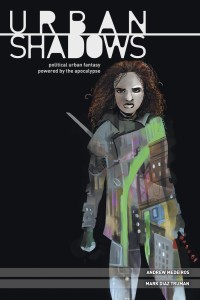 The first few chapters are predictably moves, playbooks, and the other trappings of PbtA systems like harm. I have to say the writing is incredibly clear and well laid out. All my complaints about AW’s organisation are addressed, e.g. the group combat is both clearer and easier to find by comparison. This must be set against the fact that it’s still PbtA, complete with the jargon and mindset; so if you’re coming to it as a veteran of those games it’s perfect (and great for me as a second go at MCing), but if not it still represents a conceptual hurdle.

There’s not much genre exposition outside the playbooks, but that’s OK; this is a game for a post-Buffy, post-WoD audience. We have genre expectations and the game is aware of that. The genre-specific moves start to come out with Drama moves and Debt moves; in the former case the characters are wrestling with Corruption, which is not unlike Monsterhearts’ Darkest Self but with a slower climb and long-term effects as you gain moves at the cost of your soul.

PbtA has always been interesting for Advances; for the MC it’s great that the players can just claim advances without intervention, and negotiate for their own rewards. In US the conditions for advancing come from marking Factions (Mortality, Night, Power, Wild). You can’t mark one Faction more than once, and you have to mark all four to advance. I assume this means you have to constantly insert yourself into other people’s business. The actual advances are the usual, genre-keyed stuff — membership of groups, Corruption (q.v.), advancing the basic moves.

Then there’s the MC section, which reads just like all the others — you have an agenda, address the characters not the players, etc. It’s not really anything new, but it does a great job of refining the usual advice with examples of Soft and Hard Moves. The MC has the usual range of moves, some of which are for Factions, others for the City. There’s PvP, NPC, PC-NPC-PC triangles, and so forth; there’s a discussion of the various Playbooks (Archetypes); there’s themes and general advice for narration and MC behaviour. There’s a First Session portion which is completely familiar, but very nicely done.

There is a good bit about Teaching the Game, which acknowledges the effort required in learning and the need for coaching new players without PbtA experience. I’m not sure I’ve seen anything like it in other PbtA games.

Threats are nothing new, but vastly improved for clarity — the section on Clocks, for example. Threats are thematically linked through Storms (Fronts).

The last chapter deals with creating new moves and the various traps, and a really simple but innovative method of handling players who missed the last session (Love Letters).

This feels like a true, second-generation PbtA effort; there’s a clarity, a focus on teaching players and teaching the MC that has been missing. It’s as if the authors have recognised that their do not have a direct social connection to the communities and original authors to make up the shortfall in understanding.

This fixes two of my three complaints about Apocalypse World, one being clarity of the text and the second being my preference for genre. The jury is out on the third — the whiff factor — and for that, we’ll need to play.

I have a similar feeling about Urban Shadows to my feelings on Silent Legions — and granted these are two completely different approaches to roleplaying, but they’re both genre-aware, and both toolkit approaches that put the tools in the GM’s hands. 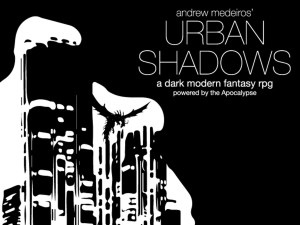 (I would have preferred this for the cover, though…)

« The Big Model: A Cognitive Map
Dorian Aquila: An Introduction »