I’ve said before that the OSR is like Linux:

OSR games are like Linux distributions: they reflect the operability ideals of the designers, they’re essentially a diffuse package of commands that the distribution maintainer curates and forces to operate together

And the OSR is like that. Outsiders can’t grok the difference between the retroclones, even if those differences are fairly significant. Their decision to look at OSR products comes from a different set of decision-making criteria (ideology, community they play with, style, genre, etc.).

(also, another strategy pyramid — for another time)

The decision for “which OSR” or “which Linux” is Operational/Instinctive — it comes down to a set of low-level activities (which dice, ascending/descending AC, which commands). The decision to use or not use Linux in favour of Windows, or an OSR game in favour of, say, GURPS, is a strategic one with completely different criteria. For the RPG choice you’ll be thinking

And so on. Yes, some of these have nothing to do with system — but they’re fair, high-level strategic decisions on which game to invest time in.

By now you’re thinking: what the hell has this got to do with Whitehack? 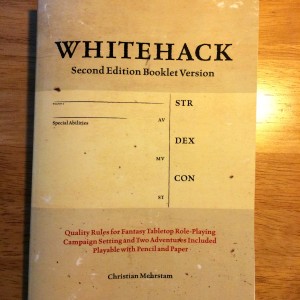 Christian Mehrstam’s Whitehack speaks the language of OSR — “zero edition roots”, streamlined rules, implied conversions from other OSR sources. Those markers help the OSR types identify this game as part of that family of games, and therefore something to be curious about. If that’s you, check out Sophia Brandt’s 7-part study where you can get the information you need to decide how Whitehack differs from your favourite OSR beast.

For the wider RPG audience for whom Whitehack is “just another D&D game” there’s not much reason to seek out those differences, and that’s a shame. So here’s where I break it down. Because this isn’t only an OSR game, it’s a conduit between the OSR and 90’s minimalist designs which also understands the indie drive towards emergent setting.

In play Whitehack appears to be built on two very important principles:

The first principle is dear to my heart and core to playing light freeform-style games such as Everway and WaRP/Over the Edge. But it’s the second that drives the emergent setting, growing the world over time. That same principle lies at the heart of indie darlings Apocalypse World and Burning Wheel.

The genius in Whitehack is not just in its re-treading of the OSR mechanisms, though these are certainly innovative and sleek — it’s in the game’s awareness of genre and setting as they pertain to “adventure”. From the beginning Referees’s section, p.24:

Nobody ever comes “clean” to a game or a genre.

Then from “Hacking Your Notion of Normal” (p.25)

The expression “normal fantasy” may sound contradictory, but it isn’t… if you want to hack your group’s notion of what is normal, concentrate on a select few important aspects of the setting and leave the rest

and from “Switching or Mixing Genres” (p.25)

From the outset Whitehack makes the correct assumption that the reader has their own biases and experience with the genre; it doesn’t work against that, rather provides a framework for emergent setting.

I’ll mention one aspect of the mechanics, which is the interaction of the Classes and Groups. Much like Numenera’s characters which are typically

Whitehack’s character classes are not vocational but only imply a core activity (Deft, Strong and Wise). The book encourages the creation of e.g. Deft Magicians and Wise Warriors with different interpretations on their vocation (a Wise Warrior is a strategist, for example).

Combining this with the different Group options — everyone gets two groups, which can be vocational, affiliation or even species — the result is almost the antithesis of D&D’s rigidly imposed class structure. Instead the classes are a starting point and a means to diverge from the traditional classes, while retaining the usefulness of D&D’s experience reward system.

Whitehack has a clear message to deliver, and is uncompromising as it is clear. It’s not available as an electronic version — it’s POD only, and the hardcover editions don’t ship outside North America. It’s also completely lacking any artwork — the cover is the character sheet, and the interior is 64 pages long with a few tables and diagrams but otherwise just text. This is a very interesting design statement about both the neutrality of the content (your genre, your emergent setting) and the way the content is to be consumed.

If you have a reason for buying something from Lulu and you’re even remotely interested, I would recommend Whitehack. In many ways it’s a deconstruction and reconfiguration of OSR mechanisms that empower both the GM and the players in owning their setting and exploring it in emergent fashion. But even better because it has the trappings of OSR it’s “compatible” with a broad range of sources, and has the potential to plug into other games. Mixing and matching Beyond the Wall/Further Afield (Threat Packs, Playbooks, Scenario packs) with Whitehack seems a distinct possibility with a bit of care.

I get a similar vibe that I got with Sorcerer and Sword — and while the latter is more genre-prescriptive, the same principles of ownership of one’s own world, and embracing the emergent nature of that world hold true. At the same time this feels as much like Everway and Over the Edge as it does D&D and it’s a true “hybrid OSR” approach that marries a player-led narrative with traditional GM oversight.

I am truly excited.