James Wallis’ Alas Vegas kickstarter was fantastically successful with a backing of 8 times its initial goal. It was also fantastically optimistic with delivery dates with an estimate of June 2013 for hard copies and December 2013 for the Alas Vegas novel. Some people are reasonably irked about the delays, and some have found creative ways to express frustration.

We are receiving some content, slowly. September 2014 got us a partial preview, and as of November 2015 the Fugue rules are “locked” and have been released under the Creative Commons license, so I’m going to look at those. 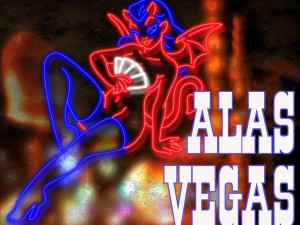 Ocean’s Eleven directed by David Lynch. Fear And Loathing in Las Vegas by way of Dante’s Inferno. The Hangover meets The Prisoner. A new style of RPG by James Wallis, named by Robin D. Laws as ‘the godfather of indie-game design’, with art from this year’s winner of the World Fantasy Award, John Coulthart.

In the backer’s preview (Septemer 2014) James Wallis reasonably asks bloggers, reviewers and the like to hold fire for a couple of years on any of Alas Vegas’ secrets, and as I can’t stand spoilers I’ll do my best not to spoil anything.

Here’s the problem. I’d like to talk about the Fugue system, but the examples I’d reach for are off-limits — both for the reader, and for me, the backer. I’m allowed to read the setting and the first act (the owner of the book gets to be the first Dealer), but not much more than that.

So, this is a review and commentary on the Fugue system in general, but a lot of it will be around what my expectations of the system are, which is something I won’t be able to realise until the release. Alas Vegas and Fugue in general assumes a relationship between GM and game author that I don’t think I’ve seen anywhere else. I’ll talk about that in a bit.

There are three operating constraints on Fugue games:

There are some implied thematic constraints too, such as the use of the Tarot in setting elements — since there’s an Alas Vegas set of Major Arcana by John Coulthart, this isn’t much of a spoiler.

There are three “Content Sets” in addition to Alas Vegas (all stretch goal offerings from the Kickstarter). I’m going to assume these sets all obey the same constraints for now.

Now, here’s the problem. The Fugue rules tell us how to negotiate some of the operating constraints, but not all. I assume those gaps have been deferred to the Content Sets, but since (a) we only have half of a draft of Alas Vegas and none of the others and (b) I wouldn’t be able to read them anyway without spoiling it for myself, I can’t say for certain. Anyway…

I went through the Fugue document and made this cognitive map: 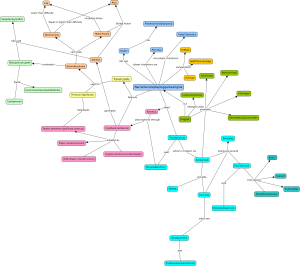 (pdf version here) Here is what you’ll find in the Fugue rules:

Now, here’s what you don’t find in the Fugue document:

While the player-led narrative control sounds like the new indie school, all of this freedom is entirely around the flashback mechanism and turning the Tarot strings into a narrative. It’s totally freeform, but it’s not dissimilar to other minimalist designs from the 90s like Over the Edge and Everway.

When it comes to Dealer behaviour, other than being prompted for flashbacks when a Significator comes up it’s very traditional, authoritarian GM stuff. The first act I read is not completely railroaded to hell, but it’s not far off. It’s been structured with scene-by-scene set pieces, drip feeding the plot to the players as you go on.

Now, thinking about the constraints above — 4 sessions, 3 hours each, and rotating Dealer with deliberate obfuscation of objective facts in the early acts — I am not sure if it could be done another way. But this raises some interesting questions about the relationship between game author and GM. The author of any Content Set is going to be unable to playtest their own game in the way it’s supposed to be presented to the players according to the Fugue rules.

This is an adventure-as-novel style, heavily plotted, a 90s throwback. There are other clues in the document — the way the Dealer is advised to make the Personas’ lives a misery, but stop short of actually killing them; the way the Dealer is advised to put off the players’ difficult questions, to restrict their movements, because where they’re supposed to be is defined by the act they’re playing in. Honestly? It reminds me of Vampire. Not a metaplotted to hell Vampire, but the intensely personal, introspective, first-edition Vampire. The version I actually like.

Thanks to this design, Alas Vegas could never have taken advantage of crowd-sourced playtesting. This is because the Fugue rules are only half of the required mechanism in any Fugue game; the other half is the Content Set.

I expect the Content Set to plug these gaps:

Time will tell if this is successful; but these are the criteria I will be using to judge all four content sets when we finally see them. But considering a Content Set needs to plug these gaps and provide a snappy, structured four-act game, I’m not surprised that the initial delivery dates proved ambitious.

I’d compare Fugue to Hillfolk (with its Series Pitches) or WaRP or possibly GUMSHOE. Ostensibly freeform, but from a school of heavy up-front plotting. Like I said, a 90s throwback. Fugue is the antithesis of modern emergent design; it isn’t is Fiasco or Monsterhearts or (ironically) Penny For My Thoughts. The controls on the Dealer authority are baked into the Content Set but instead of mechanistic controls (e.g. the way PbtA limits MC moves) the controls are entirely fictional, deliberately limiting context.

I’m still very optimistic about the final product. Partly because I’ve done this kind of game in the past — when four of us played four Eternal Champions back in the 90s, where we muddled through four sessions, rotating the GM role. Almost entirely free-form, with no controls on how far each GM could go aside from trust and a shared commitment.

As for the Fugue system itself, I think there would be no problem in running a game with a very traditional structure, avoiding the whole rotating Dealers thing. The flashback mechanics and the action rules still work, compartmentalised from the Content Set. I’m sorry I didn’t do that a year ago when we had the first document.