My first Dragonmeet happened. Highlight was the announcement of Seven Wonders, and even better the con-only print run sold out by lunchtime!

I attended the What’s Hot seminar and the What Would Jackson Elias Do? session (available here and here respectively) and played Blades in the Dark for the first time, and bought stuff: 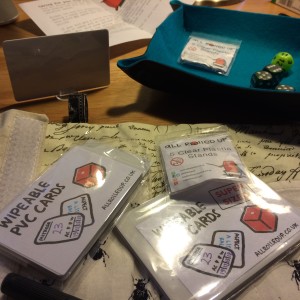 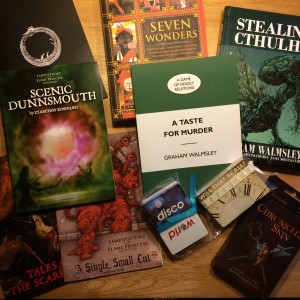 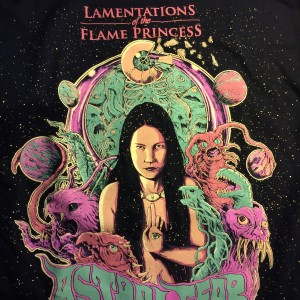 An eclectic mix, but a nice spread of OSR and storygame type stuff, plus All Rolled Up’s fantastically useful accessories.

Graham Walmsley was kind to autograph our copy of Stealing Cthulhu which I’ve wanted forever: 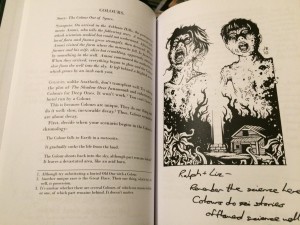 Graham asked us what our favourite monster was, and why (I assume he asks that of all his customers). I said The Colour Out Of Space, for a couple of reasons (which might not have been coherent at the time):

Since the Colour is more dreamlike than horrific, the final horror is probably a victim of the Colour, rather than the Colour itself.

Putting a human context on horror is essential for it to be horrific; without that, it’s weird science fiction — or in other words, horror is sensation, sci-fi is genre. And while Lovecraftian roleplaying has moved into the realm of pulp with Dark Young being answered with shotguns, the Colour remains nihilistic and faithful to Lovecraftian sensations of alien wrongness, promising a thoroughly miserable gaming experience. That’s a great monster.

The other Dragonmeet find was The Grognard Files who were promoting themselves with a neat little booklet and also plugged by Scott Dorward. I’m pleased to add them to my subscription to UK RPG podcasts. I guess the appeal will be limited to gamers of a certain age, but with the US-centric OSR it’s nice to have a British perspective on gaming nostalgia. If you want a run-down of the history of Runequest, Call of Cthulhu and others (I can’t wait for their take on Stormbringer) in the British RPG scene from the early 80s onwards, it’s recommended. 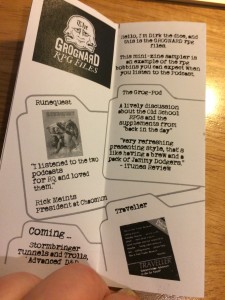 Their second podcast features a Call of Cthulhu retrospective, and name-checks several White Dwarf contributions including The Horse of the Invisible from WD66 and Ghosties, Ghoulies and Squid by Simon Nicholson from WD91 (July 1987 — just before White Dwarf’s peak and sharp decline). 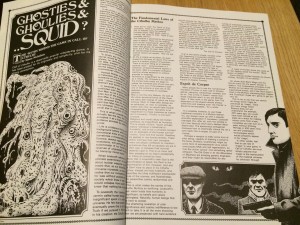 Let’s put that article in context: CoC was released in 1981, and I guess will have been available in the early 80s in the UK — but the edition that raised its profile here will have been Games Workshop’s 3rd edition hardback in 1986. That was the first time I’d heard of Lovecraft, and like Dirk I also looked for Lovecraft books in shops and the library, and found those same Grafton omnibuses with the awful and unrepresentative covers: 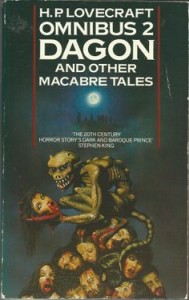 Given that Cthulhu gaming is maybe a decade old at this point (if you count Appendix N references) Nicholson’s article is fairly cutting-edge stuff. He nails the fundamentals of the Lovecraftian worldview:

And so on. Nicholson also differentiates between the Derlethian (black and white) vs Lovecraftian (shades of grey) outlook. He does call Lovecraft “an athiest, materialist, and nihilist” (implied but by no means proven), “not a great writer… his characters were two-dimensional at best” (a matter of taste), and maintains that the horror in Lovecraft’s tales comes from a bleak, nihilistic vision (I don’t agree). But Nicholson also recommends taking conventional monsters (vampires, werewolves, ghosts) and regarding them — and magic — from a scientific point of view, which is a great piece of advice espectially looking forward to the 90s where contemporary urban horror fantasy becomes the mainstay of gaming and characters have access to scientific techniques and seek explanations (arguably my Department V game was more Lovecraft than World of Darkness, with its focus on alien forensics).

With that in mind, I think it’s fair to mention Ghosties, Ghoulies and Squid in the same breath as Stealing Cthuhlu. Walmsley’s book is more mature — as you would expect, with 30 years of collective experience in Call of Cthulhu as a roleplaying exercise, and the ways the narrative may be subverted. Both works advocate deconstruction of the genre, getting back to the fundamentals, the expectations of players and how to subvert them. Just as Silent Legions deconstructs the elements of Lovecraftian (and other horror) worldbuilding, these texts are a critical eye on the elements of the Lovecraftian narrative.

At the end of the Smart Party/Jackson Elias podcast (around 59 mins) there’s this quote from Scott Dorward:

I think we’ve barely scratched the surface of what Lovecraft can offer in Roleplaying games… when you think adding Cthulhu to a game, don’t think of there being too many tentacles or Deep Ones, think of what else Lovecraft and his ideas and tropes can add to your games

Cthulhu as a pulpy tentacled monster is indisputably played out; but Lovecraft as a genre still has legs, and the analysis in Stealing Cthulhu and Ghosties, Ghoulies and Squid are the kinds of discourse that keeps it fresh, peeling the genre back to the authorial intent and fundamentals. This kind of deconstruction is what enables new ground to be broken in the Lovecraftian genre with games like Lovecraftesque.

Just don’t call it horror. Horror is an emotional response; this is science fiction. In any other game a starship’s crew will look upon the pulsing nuclear chaos of a black hole with wonder, not horror. They will transplant their consciouses from one body to another in transhuman societies, without a thought for what this means for their identity. They will accept that the universe is vast and contains many other races, for whom Humanity is an irrelevance. The first spell I encountered playing CoC was Brew Space Mead; the idea that a traveller could reach distant worlds in the arms of a byakhee or star vampire filled me with curiosity, not dread. 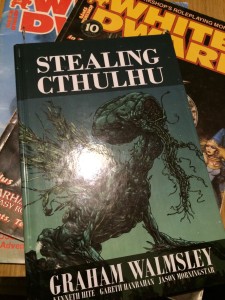 « Nihilism, Cthulhu and Me
Stop the Madness »