Things are a little quiet on this blog because (a) the house is in chaos and (b) I’m finishing of a game called The Last Days Of Dorian Aquila.

This is a game about Dorian Aquila, minor courtier, hero of wars, rake, scoundrel, lover, master fencer. She is about to fight a lethal duel, and her opponent is easily her match with the blade; the outcome is uncertain. According to the Code Duello duels will be conducted forty-eight hours after the challenge is given, in the morning between the hours of 7 and 8 depending on the season. Dorian has received La Haine’s cartel and has two days to put her affairs in order. What will she do? Who will she make amends with? Will she solemnly prepare for a dignified end, or will she spend her last nights in a debauched frenzy? Play to find out.

The number of characters has been expanded from five to seven, just to give players a bit of choice. Also they now have real names and a slightly more ambiguous nature. But then characters are easy; just imagine an archetype then think of a whole lot of questions on how they insert themselves into the situation.

So far the hardest thing has been working out play itself. Clearly these characters need to interact, but how, and why, and most importantly, what is at stake? What is the currency for the game? Do we trade Drama Points for emotional concessions a la Hillfolk, or something else?

Anyway. Playtest hopefully in under 2 weeks.

There are seven characters the players may choose from. Each character has

Ramiel has been Dorian’s fencing tutor for many years. She is dedicated utterly to her art, something that has cost her the trappings of a normal life.

Dorian’s mother has been a guiding hand through Dorian’s entire life. Her driving goal is to ensure the continuation of the name Aquila as a dominant political force, and make Dorian play her part.

Quinn and Dorian served together when they were younger officers, and both were honoured as heroes in the war. Quinn now relives past glories and her days are one long debauch, punctuated by brawls and duels.

After the war the young Dorian emerged a celebrated yet naive hero. Amedeo’s patronage opened doors for Dorian, connecting her with friends at Court.

The Presbyter wants nothing from Dorian other than to ask forgiveness and accept a loving and all-commanding God.

Dorian and Marin’s affair is the worst kept secret at Court. And while lovers come and go, Dorian has never known love like this. 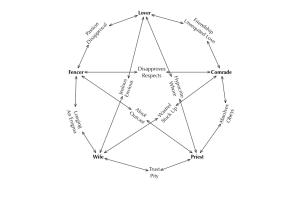 « The 5e SRD
Valmont and Danceny »