This is inspired by three different systems:

This is how combat works in Carcosa:

In Carcosa the dice shape is randomly determined (so you could be rolling d4 or d12). I prefer Necropraxis’ stabilised hit dice where the dice are d6 all the time. 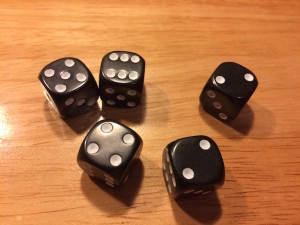 So, for a more general application, any time there’s a threat or obstacle, throw down a pool of dice representing that obstacle that the players have to knock down. The players also have their own pool of dice and if those get knocked out, they take the consequences.

Dice Clocks are progress bars. They make sense when 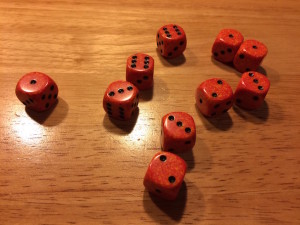 This would work a lot like the clocks in Blades in the Dark, with about as many permutations.

The stealth and combat examples are fairly narrowly defined. The others are a bit broader, abstract and freeform — e.g. the murder enquiry would traditionally be a constructed investigation with a trail of clues (Cthulhu, etc.) but in this case the players are rolling to get a clue, and the GM is making up the clues as a response to the dice results.

Using the dice like this mean that more than one kind of roll can be used to knock down the clock, if you want to play like that. Both stealth (dexterity) and misdirection (social) rolls could be used to avoid detection in an infiltration or heist. Just be clear on what skill rolls will affect what clocks.

Knocking the dice down

How do dice get knocked down?

This system works with both roll-over and roll-under. If it’s roll-under the margins of success have the potential to be big and the margins of failure are limited by the maximum on the dice (20). 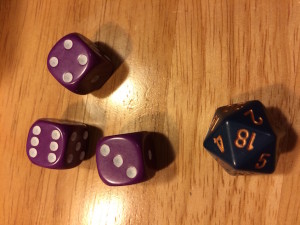 Just as in AW and BitD the clocks can be knocked down by more than one kind of action, encouraging teamwork. If the team were working together in a heist, they might overcome the bank’s defences with a combination of subterfuge, stealth, technical know-how and even brute force. All qualifying actions count for knocking down the dice clock. Using the clocks like this injects a bit of narrative woo into the typical d20 style games, if you like that sort of thing.

When the clocks are rolled, the GM should (normally) be clear and up-front about what the GM’s dice mean, what the players’ dice pools — or collective dice pool — mean, and what actions will result in pools being under attack (e.g. for combat the only thing that can knock each side’s dice down are direct attacks).

This system could eliminate separate damage rolls. Instead, use the margin between the target and the actual number rolled as the damage inflicted (so a roll of 15 vs AC 12 is 3 points of damage).

HD are a combination of experience, capacity for fatigue, will to survive, and luck. They can go down without causing a problem until you hit zero.

Traditionally they’re just used to track personal (and physical) hurt. With a broader interpretation they’re the character’s safety net in any situation. Why not use Hit Dice in social situations, or infiltration, or magical duels, etc.? Doing so requires a couple of changes:

Going beyond death (or dismemberment) — the MC moves from Apocalypse World are good for some ideas about consequences when the dice clock goes down to zero:

How many dice for each character class? If this were combat only, you could start fighters with three dice, rogues with two and mages with only one.

Another way to do it: start everyone with a base number of hit dice (say two, increasing with level), but each class has extra dice in certain circumstances:

In no particular order, here are some other permutations of dice clocks.

If teamwork is needed, the party can pool their dice together into one big pool, representing a common action (e.g. stealth). If this happens, make sure everyone who’s in the group rolls dice. Those characters who are bad at stealth actions should be a liability and knock everyone’s clock down.

More than one clock

If you have more than one threat clock, use two different colours of dice, obviously. This would work if the party were, say, fighting a whole bunch of goblins and one powerful sorcerer. 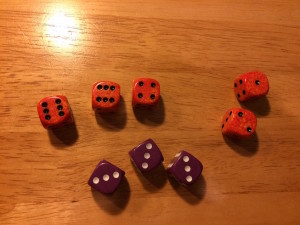 For combat the GM can roll one big pool of dice to represent a horde of monsters. Just decide how many attacks or actions that horde can take at one time.

When the dice are rolled, highest numbers are knocked down first. So if you roll a 6, 4 and 3, the 6 needs to go down before you tackle the other two.

You could use this rule to create interference. In the above example if the goblins’ dice are higher than the sorcerer’s, that means they’re getting in the way and the party must deal with them first before they can knock the sorcerer down. 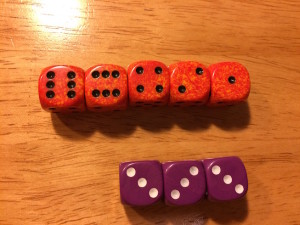 This could also be used for the party. Let’s say all the players put down a separate group of dice for each characters; even if the Fighter should be in the front line, if the Magic User has a higher Hit Die, then they might cop an attack first. Offset this by letting the fighter actively sacrifice their dice to protect the MU.

Sacrifice one of your own dice to protect someone (say, prevent a consequence landing on another character) or to do something cool (maybe even a narrative control mechanic). Bid your dice like poker chips.

The ability to sacrifice under certain conditions could be class-dependent (fighters to protect, rogues to do stunts, etc.)

If you have stages of effect (say, stages of alert in an infiltration) where at certain points something happens (the guard is doubled, the score is moved to the vault, etc.), represent with two different colours of dice in two pools. When all your orange dice get knocked down, that’s a stage 1 event. When the purple dice are gone too, that’s a stage 2 event.

This process probably doesn’t with the interference option, however — the pools are knocked down sequentially.

Dice in the open

By default, roll the dice on the table and let the players see them and decide how to handle them. Be clear about what those dice represent, e.g. how close the guards are to sounding the alarm, luck running out in a chamber full of traps with pressure pads, etc.

If you keep dice back it should be because there’s something the PCs haven’t seen yet that you want to keep track of. Roll that dice clock behind a GM’s screen or something.

I’m not sure yet if this system has legs, or if it’s another fantasy heartbreaker. Certainly running OSR combat Carcosa style but with the stabilised hit dice has a couple of benefits: one, the dice on the table are a stake and something nice and tactile, and two, book-keeping is easier with low integers.

Provided for context in case the reader isn’t familiar with the various sources.

The benefits of doing it this way are

Otherwise it doesn’t change much function-wise.

If you don’t care for the dice randomness this post (Necropraxis) suggests flattening this out to d6s for everyone.

Blades in the Dark’s Clocks

Blades in the Dark expands on Apocalypse World’s clocks for a wider range of situations including:

And so on. Interesting that John Harper doesn’t use a personal clock to measure character damage, as is Apocalypse World’s way. Note also that Harper uses the clock as a variable count where zero represents the change of state, rather than having something happen at each segment per the advice in Baker’s book.

I love the concept of clocks, although I’ve never been satisfied with their explanation in AW, and while BitD’s kickstart gives a lot of options it doesn’t give enough examples of play. It’s not clear in either game whether the clocks are meant to be in view of the players — that would make sense, right? Otherwise, what’s the point of ramping up that tension if the players don’t feel it, and take steps to address it? But AW is clear that clocks are a prompt for the MC, not the players.

Hollowpoint is all about the dice — the core of the game is a dice conflict where matched sets of d6 are used to attack each other’s dice pools. One of the mechanics is the Catch, which is a pool of dice that represent a mission objective (steal a thing, get some information, assassinate someone) which can only be knocked out by one skill.