In the summer of ’93 I discovered two new favourite things: Bowie and Moorcock.

Previously I hadn’t really gone for glossy, commercial ToTP 80s Bowie, although Bowie the actor was interesting in Labyrinth (and perversely Absolute Beginners).

But Suffragette City was sampled in Carter’s Surfin’ USM, which was interesting. That year Ziggy Stardust, Space Oddity and especially Hunky Dory were on pretty constant rotation in the walkman. Also, Suede. Speaking of which, here’s a nice picture of David Bowie and Brett Anderson: 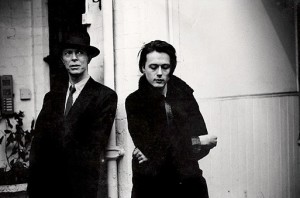 Anyway, I was listening to Quicksand and The Supermen and Wide Eyed Boy From Freecloud and at the same time getting into Hawkmoon (in the big Millennium omnibus imprint) and reading about Granbretan’s masked armies and giant flamingo riders with flame lances over the Kamarg. Also, drinking short-dated beer from the Classic Deli and watching Orlando and Naked Lunch at the PPP. Speaking of which: 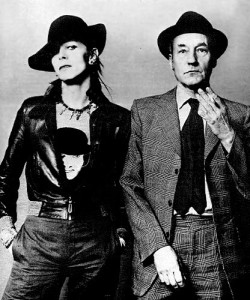 There was also Vampire, which became next year’s big campaign, through my finals year, where I laid the foundations for future gaming and friendships to this date. Some of those friends are no longer here. They are who I am thinking about right now, as well as all the friends I have made who are still here.

Anyway, David Bowie was there. I’m hanging onto the tapes.