Watch this bout between Valmont and Danceny from 1988’s Dangerous Liaisons:

The Vicomte at least turns up to the fight sober, unlike this scene from 1989’s Valmont.

In both versions Valmont and Danceny are probably evenly matched, Valmont having more experience but the Chevalier having youth, vigor and a lot of technical skill (as shown in Danceny’s bout with Gercourt in Valmont at about 1h00).

What’s interesting is how the positions are reversed between the films. Reeves’ Danceny attacks with uncontrolled and dogmatic fury while Malkovich’s Valmont has a calm and irritable aloofness. But in Valmont, Colin Firth’s character is the one to initiate the exchange, forward and angry while Henry Thomas’ Chevalier remains calm throughout, always giving ground until Valmont’s fury is spent before delivering a single, fatal thrust (we assume, as this happens off-camera).

The encounter in Valmont is more credible, both for length and position of the protagonists. Dangerous Liaisons’ duel looks dramatic with Reeves and Malkovich running all over the place, panting with exhaustion, etc. Note that the affair is not settled at first blood, which is probably period correct, as Amberger notes in The Secret History of the Sword:

in Central Europe the First Blood principle was held in low esteem — which meant a debilitating injury was required to terminate the duel.

What’s going through these characters’ minds? 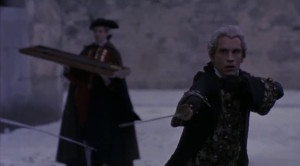 Valmont does not want to kill Danceny. He has control of the fight throughout — he chooses when to retreat and when to advance, displaying great calmness, vigor and judgement, sparing Danceny when he could kill or wound him, non-verbally halting the duel to change swords, ignoring his opponent even when on his knees, and ultimately choosing to die.

To him the whole affair is a tragic waste of time. But, did he intend to die from the outset? It would seem so given that he is carrying around Merteuil’s letters, and he is psychologically hamstrung by the fallout from his affair with Tourvel; but it’s uncertain whether he decides to die out of despair, or because he must be punished, or just as an alternative to inevitably killing Danceny. 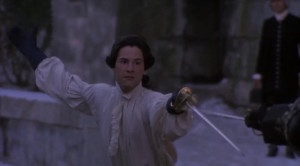 Danceny doesn’t know what he wants. All he knows is that he is unable to concede, and he lets this drive him throughout the exchange to one end or another.

After his temper has cooled Capaldi’s Azolan tells him “it’s all very well for you to feel sorry now”. While this seems a bit harsh given all we know of Valmont’s mind, still Danceny is an immature character who didn’t realise the stakes until too late.

Steinmetz notes in The Romance of Duelling “he who makes free with the bottle seldom rises with a steady hand”. Valmont’s judgement is fatally clouded by drink.

This Valmont is every bit as aggrieved as Danceny; while we can put his drinking the previous night down to fatalism, at the point of the duel he is practically enraged. Was there time enough for Valmont to think? Consciously or not, in the end he forces the same decision onto the Chevalier that Malkovich makes for Reeves.

Danceny would have been satisfied by an apology, and probably first blood if the opportunity had arisen. The earlier bout with Gercourt shows exactly how much control the Chevalier has with the sword; but the fury of Valmont’s advance probably left him with little option.

Probably. After all, the Chevalier doesn’t seem too cut up at Cecile’s wedding to Gercourt. Perhaps he’s a sociopath after all.

Plus, we know he could probably have Gercourt on a good day. Watch Dangerous Liaisons II: Doubly Dangerous and see Cecile and Danceny conspire to arrange a duel, dispense with Gercourt and live happily ever after. 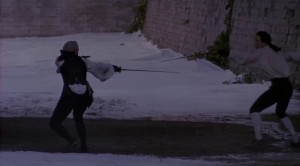 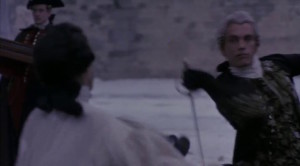