Reworking a thing I did a couple of years ago. Originally it was inspired by The Seclusium of Orphone of the Three Visions, but considering society as a vehicle for magic.

The seven ages are: 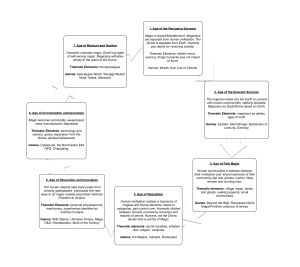 1. Age of the Reclusive Sorcerer

Magic is feared/forbidden/evil. Magicians are separate from human civilisation. The Divine is separate from Earth. Humans pay dearly for venturing outside.

2. Age of the Itinerant Sorcerer

The magician walks into the Earth to connect with human communities, seeking disciples. Magicians as Gods/Divine Spark on Earth.

Human communities in balance between their civilisation and liminal elements of their community (fair folk, ghosts, myths). Wise women and cunning men.

Human civilisation realises a taxonomy of magical and Divine elements; seeks to categorise, gain control over. Humanity divided between minority of powerful sorcerers and majority of peons. Humans, not the Divine, decide who is worthy of Magic.

5. Age of Revolution and Innovation

The human majority take back power from minority gatekeepers. Individuals find new ways to do magic outside prescribed methods. Freedom to conjure.

6. Age of Incorporation and Ignorance

7. Age of Mistrust and Decline

Humanity mistrusts magic. Earth is purged of self-serving magic. Magicians withdraw wholly to the realm of the Divine.