Just over 6 months since part 1, but better late than never, eh?

So, to recap: these are some thoughts on how to make Stormbringer-style demons work mechanically for OSR frameworks.

In part 1 I hedged on a definition of what demons are — because (a) it’s not necessary and (b) use what fits with your campaign. However since it might be useful to understand where I’m coming from (and how specific or general I’m being) my out of game definition for demons is:

This may work for your in-game definition too. It still works when it’s dressed up in some lay belief or religious dogma, whether demons actually come from the other place or if they’re truly conjured from a piece of the sorcerer.

What Do Demons Want?

The classic answer is “to get out of the pentagram and devour their summoner”. Actually my demon is quite happy where it is, thanks.

My demon wants to (metaphorically speaking) hollow out the summoner and walk around in their skin. It wants to take all the humanity in the sorcerer and pervert it, diminish it, until the demon dominates.

The best example of how this works is the wraith’s Shadow in Wraith: The Oblivion. The Shadow has Dark Passions which are goals fuelled by a negative emotion; it may attack the Wraith’s own Passions and Fetters (i.e. connections to the mortal world, what’s left of their humanity); it has its own special powers as Thorns.

The Shadow is part of the point of Wraith. When your character dies and their Wraith comes into being, their Shadow just bubbles to the surface with all the other emotions, ready to cause mischief in a struggle for dominance. Naturally your typical White Wolf game takes 300 dense pages to communicate the idea, but it’s a great idea.

Now, what kind of power-crazed sociopath would deliberately bring out such a force into the living world?

One other demon trope I’d like to address is the idea of total possession, i.e. a skin-ridden character completely sublimated to the demon’s will. If you’re a demon and your end-game is to get the sorcerer to behave badly (to the point of complete self-destruction) then this seems like a good strategy. Here’s why it’s not:

There could be exceptions — say, when a sorcerer dies, the demon (or demons) decide to walk around in the recently vacated corpse and have a bit of fun while there’s still time. That would make for a nice antagonist, but it’s a short-term thing at best.

Stormbringer and Sorcerer both present the demon with some kind of need (which is often habitual and/or physical, like eating something). If you let the demon satisfy its need then you get a Service in return.

I don’t care for that, for these reasons:

The most generic demon need is the need to transgress. That compulsion is an essential part of the genre — but it’s not a need, it’s a consequence. And it’s not really the demon that’s transgressing, it’s the sorcerer. It’s the Shadow’s Dark Passions at work.

There are six needs, aligned with six demons, and six kinds of relationships — one for each attribute.

The relationship is pretty simple — it’s a struggle for dominance between the conjurer and their demon. The demon knows that it provides a needed service. When everything’s going fine that service isn’t in question, but during times of stress — if the sorcerer asks for something outside the original contract, or something that puts the demon in harms way, or refuses the demon some comfort, you might want to test the relationship.

The roll could be as simple as a pass/fail (e.g. roll under the attribute). It would be more interesting with more potential results, e.g.

For an actual working system I can think of two approaches. The first is the “Whitehack way”: a general description of a power, and a negotiated cost for that power in HP — the cost may be modified by circumstance (in this case, how the demon is feeling, whether the sorcerer has partaken of transgressive behaviour to “feed” the demon, etc.).

The other way is the “Vancian way” where the demon can cast a number of spells per day of a certain class. There’s still room for negotiation though — let’s assume the demon’s power is limitless, and it’s only cutting the sorcerer off because of the contract. I’ll talk about contract negotiation in part 3.

By the way I’m not going to itemise D&D spells, especially since these will vary between publications. I heartily recommend Whitehack which does a sort of ranking of “classic” OSR spells by level for the purposes of judging spell costs, etc. Personally I like spells with no levels, e.g. Beyond the Wall, Wonder and Wickedness.

There are six kinds of demon — one for each attribute (although that’s a happy accident from Stormbringer 1e rather than design). Each follows the template:

Form A chattering sword. A bulging vein on the sorcerer’s arm that projects a limpid adhesive. A lantern containing a vermillion mist. A six-legged panther, steered by an insectile brain parasite. An oil-black ape with a mass of cruel quills at its back. 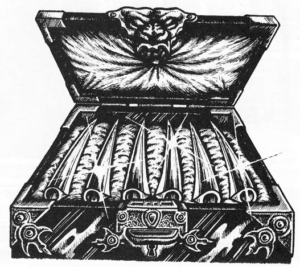 Form A seven-headed swan. A wardrobe full of fur coats. A circular gateway etched with hyroglyphs. A displacing cloak. A giant winged insect with a vial of amber potion.

Need To survive, to resist injury and death, to remain hidden, to have privacy.

Form A blackened brass shield. A penetrating sound. A cloak of dripping eyes. A riddling goblin. A hyena-headed bear.

Form A mirror with a disembodied mouth. A hairless dwarf advisor with a bifurcated throat and duotone voice. An iron-bound book. A painting of shifting scenes. A dream with common themes. A deck of Tarot cards.

Need To imagine, to dream, to grasp desires, to have material whims satisfied.

Form A suit with an iridescent lining. A briefcase with a golden shining interior. A bronze-skinned youth with purple almond eyes. A chattering brass bird. 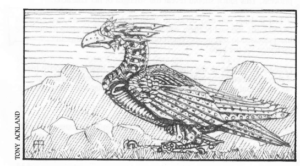 Need To control perception, thought, emotion, and action of others.

Form A drug, supplied from a jade poison ring. A red gold circlet. A slender bald human in a suit. The sorcerer’s mirror image, horribly disfigured.