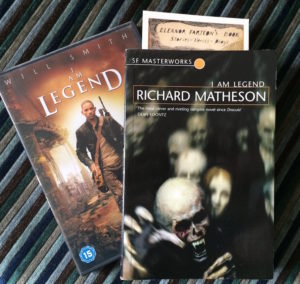 The third act of the film I Am Legend is a crushing disappointment that betrays both the first two acts and the novel.

However the first 60 minutes still worth watching to see Will Smith as Robert Neville coping with a solitary life in post-apocalypse Manhattan. Aside from the spectacle of overgrown island with only the sounds of wildlife, it’s the way Neville establishes a daily routine and the mechanisms he uses to fight off boredom and loneliness that makes the film.

First, I commend the reader to seek out Emily St John Mandel’s Station Eleven. It’s a great book that feels like an optimistic mirror image of Cormac McCarthy’s The Road. More specifically chapter 6 contains one of the most succinct descriptions of everything we would lose in the apocalypse (in this case, a global pandemic):

No more diving into pools of chlorinated water lit green from below. No more ball games played under floodlights. No more trains running under the surface of cities on the dazzling power of the electric third rail. No more films, except rarely, except with a generator drowning out half the dialogue. No more concert stages lit by candy-coloured halogens. No more pharmaceuticals. No more flight.

Lewis Dartnell’s The Knowledge runs through various scenarios of all the things that can go wrong during and shortly after the apocalyptic event. Following the apocalypse there’s a “grace period” where humanity can subsist and scavenge on the remnants of the past civilisation (after which you need to think about making food, medicine, transportation and power).

The proposal for a “survivalist RPG” mostly considers the grace period, or early years after that when a lone survivor may have established their base and needs to provide themselves with sustainable food to survive.

A let’s call the “survivalist” genre a sub-genre of collapse/post apocalypse. It’s preoccupied with resource management, and the first priority of your survivor has to be food and shelter. After that you can argue about whether transportation, power, or weapons and defences are more important.

All of these are fairly easy to model in a game especially because the consequences of not having them are similarly easy to predict — you can measure how far you can travel, how many bullets you can spare, and how may hit points you can cross off before you succumb to thirst.

But I’m hard pressed to think of one RPG that adequately manages social and mental resources; a game that captures the loneliness of Robert Neville. This shouldn’t be surprising since RPGs are (mostly) about interaction between characters.

Here are some typical examples:

All Flesh Must Be Eaten

The framework in All Flesh Must Be Eaten might as well be GURPS — hardly surprising given that it’s built on the highly generic (though functional) Unisystem. There are nods to scarcity only in the ammo record forms — otherwise it’s preoccupied with the many different permutations of zombies, which it does very well.

This game does interesting things with traumatised characters — only characters with mental trauma can ignore the Call from the Sea of Leaves, so while these people are generally not accepted by the post-apocalyptic community, they’re vital to that community as the only ones who can shepherd “normal people” between settlements safely. Summerland’s Trauma’s are invoked voluntarily however; they’re not a resource to be managed, as the characters don’t degenerate any further.

Sine Nomine’s Other Dust is an OSR adventure game, and as such makes no real attempt to direct the character’s mental states. It does acknowledge the politics and tensions arising from scarcity, but manages this from a high-level view of factions (much like other Sine Nomine sandbox titles).

Actual mental degeneration isn’t baked into AW, beyond the Hard Moves the MC can inflict on the PCs. And Hard Moves represent short, sharp shocks rather than slow decline; the only lasting harm that can be inflicted is physical scarring. Apocalypse World’s characters are by default extremely self-reliant with a high self-esteem. Only the NPCs are influenced by wants.

So, the existing canon of RPGs is (I think) generally thin on the ground for modelling the effects of limited human contact and dwindling resources. Here are some suggestions.

For better or worse we do have mechanisms to model mental distress — the obvious one being Sanity mechanics. The most sophisticated, and probably very well suited to a post-apocalypse game, is Unknown Armies.

The crucial point about UA is how these stresses are brought on — the PC is challenged with a stress at a particular level, and will either beat that stress or fail it. This means a post-apocalyptic scenario must have events that trigger stress checks.

The very pulpy Black Hack may not be an obvious candidate for survival horror, but on the other hand dungeoneering itself is a survival exercise.

The Black Hack has already been, er, hacked into The Cthulhu Hack, and this points the way to using this system for deteriorating physical and mental condition by way of the Usage Die. Any physical or mental resource can be represented by a Usage Die. What matters is how the Usage Die roll is triggered (flashlight for clues, sanity for frightening experience, etc.).

Now, why not have a group owned Usage Die? You could use it to represent food, water, fuel, electricity, ammunition:

You could also have a Loneliness Usage Die. When your character may feel isolated, roll the Usage Die and on a 1 or 2 they are overwhelmed with a feeling of loss, sorrow, and need for human contact of some kind. Extrapolate that further and you could have one die for each of the Unknown Armies madness meters above.

Beyond the Wall — making friends

Each Beyond the Wall character playbook includes an event where the chararacter forms a bond with the next person around the table. Consider a character generation round-table discussion:

That will give you a couple of talking points for each character. The GM can then use these for setting conditions when the characters are under stress — possibly forcing a roll of a Usage die.

Dream Askew — many GMs, one character

Finally, if you want a truly isolated RPG experience, and you can’t have more than one character — why not have one player playing their PC throughout, and the other players sharing the GM role? That’s not quite how Dream Askew does things, but if the other players only focus on the Situation Sheet (modified for a lonely experience) they can narrate, make moves, and push the protagonist in certain directions. If you were going to do that for I Am Legend you might have Situations including