I got my copy of Mournblade at Librarie la Licorne in Aix. Last visit they’d moved all the jeux de roles to the cellar and kept the bandes desinees on the ground floor. They had lots of sexy French editions of L’Appel de Cthulhu and even translations of Monsterhearts and Polaris. Service is great! Recommended when you’re between sojourns along la cote d’azur. Mournblade is produced by the French RPG house Sombres Projets. Both Mournblade and their other game Wasteland use their Choose Your Dice (CYD) system, which is a clean but otherwise run-of-the-mill, trad-modern, middle-crunch fantasy RPG system. Production values (like all French RPGs, IME) are fantastic.

(Just FYI Wasteland is all about a new Knights of the Round Table in a post-apocalyptic world where only southern England and northern France exist. This is the only game I know that makes Eastbourne a major location, which is hilarious.)

Moorcock in RPGs: A History

I think I’m correct that there have been five incarnations of Eternal Champion/Elric RPGs:

As a Moorcockian reference Mournblade is a footnote at best, a device that underlines Yyrkoon as counterpoint to Elric and Stormbringer. In an alternate narrative Yyrkoon is a drug-addled sociopath, reaving his way across the Young Kingdoms after sacking his home city, with Mournblade as his conscience like a soul-devouring Jiminy Cricket.

So in the context of the RPG timeline Mournblade is a knowing wink that brings us full circle back Stormbringer. But what matters in the whole timeline is the point where the title transferred from Chaosium to Mongoose. Despite a new system Mournblade is still “a collective endeavour based on Mongoose’s Elric of Melnibone, the works of Michael Moorcock and the CYD system” and bears both Mongoose and Mongoose’s Elric of Melnibone branding alongside Sombres Projets, who appear to be producing the game under license from Mongoose. Not only is Mongoose’s writing team acknowledged in the credits, portions of Mournblade’s text are direct translations of Whitaker’s work from Elric of Melnibone.

(Back in 2013 when Sprange announced that there “were no plans for future Elric books” he dodged the licensing question; I suppose Mournblade answers that question.)

In some ways Mournblade is the clean break that the Elric of Melnibone RPG failed to make with five generations of Chaosium product. Whittaker’s writing has real heart, not to mention significantly more volume (Stormbringer and Elric! each devote about two pages to the various islands, Elric of Melnibone and Mournblade have 8 pages each on the equivalent section, with a lot more context and history) but that game was hamstrung by a mediocre version of BRP and Mongoose’s shocking production values (poor headings, low contrast grey-on-grey printing, a character sheet that looked like it was knocked up in Word). The fact that Elric of Melnibone used a variant of BRP can’t have helped — and while the CYD system won’t set the world on fire it does at least make Mournblade its own thing.

Despite the change in writing team Willis and Watts’ Elric! still feels like a Chaosium game with concomitant production values and a particular atmosphere. Make no mistake, I have a deep, nostalgic love for Stormbringer and Elric!, especially early SB with the best magic system, fewest compromises and demons, demons all the way down. But just as Call of Cthulhu isn’t about playing a Lovecraft story but playing in Lovecraft’s worlds, Stormbringer is about playing a fantasy game with all the trappings of Moorcock’s worlds, but not necessarily with the same tone as his stories. In some ways I think SB suits low fantasy better than high, absurd demon power levels notwithstanding.

This is the history, geography, and slice-0f-life fluff that sets the stage. Includes:

Literally “the elected”: in the context of Moorcock’s fiction les elus are characters who do the bidding of Law and Chaos. This reflects “Les Dieux Vous Ont Choisi” on the back cover.

This section is the largest and comprises:

The GM’s section with adventures and characters, focused around Bakshaan on the northern continent. The headline here is that a good portion of the text is directly translated from the Mongoose RPG — right down to prose. I haven’t gone through and directly compared every passage, but I know that e.g. the sections on Religion and Melnibone are near identical.

However the first book has more than double the page count of the corresponding chapter in Whitaker’s book, with no appreciable art padding or difference in font size — so there is new content here. Some of it seems to be expanded from Whitaker’s book (e.g. “Magic and Technology” appears to have been more than doubled, and includes a section on l’etat des sciences). Some of it may be new. It’s possible that some of it may come from other Mongoose supplements like Bright Shadows, but I’m not inclined to go through the text with a fine tooth comb.

This section has pretty much everything you’d expect — geography, history, life in the Young Kingdoms, arts, sciences, magic, Law and Chaos. I think Whitaker’s treatment of the source is both more thorough and more engaging than the Chaosium offerings (which seem to rush things), and Mournblade appears to be more of the same. My one complaint is that when Whitaker wrote the section on Melnibone he included a fair amount of localised but important history, and since his work has been repeated here it follows that the History section doesn’t contain all of the History — pieces are still scattered throughout the geography and other sections. This isn’t the best organisation, though hardly a deal-breaker. 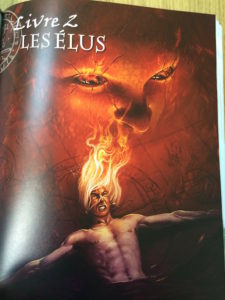 The USP of CYD is that you get to choose whether to roll a d10 or a d20 for skill tests.

Otherwise the CYD system works around the tried-and-true Attribute+Skill+Roll formula. There are five attributes:

There are secondary derived attributes (defence, health, psychic energy and speed), a fixed number of skills, and predilections (specialities, sub-classes) for those skills. There are about 18 skills listed on the character sheet. It’s neat enough, and much more consistent than BRP (and especially Mongoose’s RQ1).

Other parts of the character sheet include system currency in the form of Bonne Adventure points and Eclat points, which are gained and spent in-game to represent fortune and heroic acts much like Drama points in other games (and as part of the overall experience section). The Cosmic Balance is determined by the character’s affinity to Law and Chaos, and the margin between.

There are the usual sub-systems and examples for cooperation, conflicts, duels (which could be any conflict between two or more individuals, resolved in a fixed number of dice rolls).

This is the usual “character tuning” section by geographic location, by social class, and by profession. The Origins (homelands) section is a nice summary for players of the different regions with divinities (Law, Chaos, beast lords and elementals) and advantages. Then the Heritages tend to be a package with advantage and disadvantage, including pariahs, nobles, abominations, hermits, and scoundrels (“crapule”). Finally the professions (assassins, courtesans, scholars, knights, etc.) provide an effective class with specialities and starting equipment. The combat section is predictable, with combats divided into rounds (tours de jeu) of six seconds, initiative, tests and damage. There’s a section on the effects of an echec dramatique on the outcome of a fight. For melee combat there are four basic attack options (violent attack, precise attack, feint and coup bas or trick) plus some advanced ones like charging into combat, containing an adversary, disarming them, or fleeing; there’s rules for improvised weapons, advantageous positions, etc. Wounds are lethal and non-lethal; there are rules for healing and the disadvantages of being wounded. 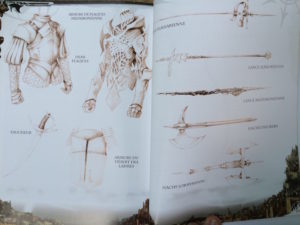 Granted this is my first read-through and I may have missed something, but I’m struggling to get excited about any of it. It’s straightforward enough. I’d need to play it out to confirm it’s actually functional. This is another familiar section, right down to the Grome illustration by Frank Brunner: This section seems much more extensive than both Stormbringer and Mongoose Elric. While I like the latter for the list approach of does-don’ts for each cult, Mournblade’s approach to La Veneration Des Puissances works like this:

There are lots of examples and choices. I do feel that Mournblade does a better job than previous versions in connecting the characters to the higher powers. I haven’t checked how much of the text is directly translated from other sources, e.g. Mongoose’s Cults of the Young Kingdoms but the content here is more than enough, and most importantly a lot is player-facing and puts the cults in the context of an agreement between individual and deity (whereas in Mongoose Elric the “gift” comes from cult devotion — mechanically the same, but thematically more like Runequest) The magic system borrows heavily (and possibly wholesale) from Mongoose Elric, so if you know that system it’s basically more of the same. Mournblade has

It’s worth noting that the various Demons of Desire, Knowledge, Combat, Protection and Travel (but not Possession) made it back into Whitaker’s game, and also appear here. They’re still not quite the same conceptually as early Stormbringer, but at least they’re not the “breeds” from SB 4e/5e.

In general the magic is interesting and provides a lot of variety and I guess it’s necessary to have a discrete magic system market a fantasy game in general. Maybe I’d like them to have been a bit braver and roll the elemental and demon summoning into the system of Pacts and make personal power solely about connections with higher powers. But it’s a good, muscular magic system you can sink your teeth into. 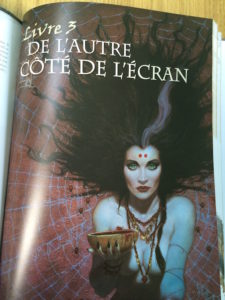 The obligatory GM’s section always follows the same format: an adventure, maybe one or two essays on how to GM, and a few charts and tables and a character sheet in the back. From what I can tell the adventure is perfectly serviceable, there are setting maps and personalities and nice pictures to go along with them. I think to properly evaluate the content I’d have to run it. But otherwise it’s pretty much what you’d expect: maps, personalities, a synopsis (a rescue mission to an island of cannibals in the archipelago near Bakshaan, if I read correctly). “What, you can actually read French?”

My French is not great, but with Mournblade I’m not only familiar with the source material, I’m also expecting certain rules and structures (from world-building to character creation to combat rules). All that compensates for the gaps of my vocabulary and make sense of the content. And RPGs are (usually) written for comprehension rather than prose, which helps. Fiction and bandes desinees are harder owing to prose and slang.

Am I glad I bought Mournblade? Hell, yes. It makes me happy that there’s still someone making a Moorcock RPG, even if it’s not in English.

Would I run it? Before I gave it a proper read through I expected it to just be a souvenir and sit on my shelf next to SB 4e, Elric! and the Mongoose books. I don’t really feel the need of any new system — and since I’ve been thinking up an OSR hack for SB 1e’s demons, I’m more likely to use that. But I do feel the urge to run with the CYD system, at least once. I can see myself running See Hawmgaarl and Die! at a Con with a bunch of CYD pre-gens.

Should you buy it (if you can find it)? That depends: