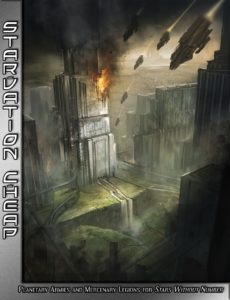 I finally sat down to Starvation Cheap — Sine Nomine’s military campaign supplement for Stars Without Number — after re-reading Joe Haldeman’s The Forever War.

That in turn reminded me of the first war RPG we played, Revised RECON. Back in the 80s we’d play that during breaks under the stairwell in the college’s creepy abandoned B Block. Given that our only cultural touchstone for the Vietnam war was Tour of Duty (taped on VHS from the 1 am broadcast on ITV) the game was a sensationalist mix of cartoon jingoism, violence and unintentional racism.

Our next foray into war was only slightly better, hacking the original WFRP to play the newly released WH40K:Rogue Trader as a RPG, and playing out a thinly veiled Aliens pastiche of surreal jingoism, unintential violence and cartoon racism.

So, two out of two of the military campaigns I’ve played have been rather juvenile and not something I’m inclined to repeat. It wouldn’t really have occured to me to buy another military RPG, but I backed the Starvation Cheap Kickstarter on impulse, after loving Silent Legions and more importantly the promise of Starvation Cheap also in epub format.

In a nutshell, Starvation Cheap does for a military campaign what Silent Legions does for the Lovecraftian horror genre. Just as Silent Legions creates a complete campaign starting with the supernatural pantheon and working downwards through cults and locations, Starvation Cheap does the same by focusing on the source of the conflict then populating it with personalities, missions and the like.

The first 25% or so of the book is mostly text (and the ePub version is especially welcome) covering a range of topics:

The Logistics section deserves a special mention with all kinds of problems that might arise — and adventure hooks that result.

Since the book is also a Sine Nomine sandbox product, the next major chunk of the book is table after table for generating content, including

This content is actually spread over several chapters (before and after the massed combat rules) but it’s all part of the same whole — a top-to-bottom war scenario generation tool. The amount of utility is quite staggering, and crucially it’s largely system agnostic — yes, there are mentions of hit dice and Luck rolls here and there, but a huge chunk of this book could be repurposed for your system of choice.

There’s plenty of debate about what “innovation” means in the OSR (as if that were one monolithic entity). One reason it’s hard to pin down is the sheer number of diverse examples from settings to new takes on old rules to highly functional supplements. Starvation Cheap falls into the third category; but rather than using it as a poster child for the OSR, we should be recognising its broad general potential — it’s an innovative RPG supplement, full stop. Mainstream RPGs would do well to pack this much utility into just over a hundred pages.

Tucked in the middle of the book with just a few pages there’s a section on running massed battles, using the “war turn”. This boils military units down to a few descriptors (strength, condition, type) and with a few die rolls you can resolve old battles and start new ones. All of this can be used to frame the ongoing conflict as a backdrop for the PCs’ adventures.

The least appealing section for me, but expected by most RPG consumers. The section is still brief and to the point, and the descriptions of new equipment (personal and vehicular) are fun enough.

After reading Starvation Cheap I went back to see how much had been cut and pasted from Skyward Steel, the Naval counterpoint to the army campaign.

The answer is, there actually very different in presentation. I found Starvation Cheap much more complete and accessible with all those tables — but the fact is they complement each other. Skyward Steel has the sections on Life in the Navy and Running Naval Campaigns, but it lacks any of the random generators, tag systems, mission generators, or attention to detail concerning the chain of command. The one thing it does provide is the very fun Battle Stations section with the different roles on the ship’s bridge.

With a bit of thought I reckon the two could be combined effectively — use the mission generators, the chain of command and so on from Starvation Cheap and apply to a Navy setting, and away you go.

Thanks to Bundle of Holding I’ve owned the other SWN supplements (including Starvation Cheap’s naval counterpart, Skyward Steel) for ages, and just not read them because they’re in an very awkward format for me; too small for a tablet, and the two-column layout makes them a pain to read on a 16:9 laptop screen on a first pass. But for Silent Legions I basically read the epub cover to cover, then bookmarked the pdf for the important sections.

An ePub version is no guarantee of writing quality, of course (of the few RPGs I own that are Kindle-ready, Urban Shadows is excellent, but Nobilis is excerable). Nor does it do tables or boxed text very well. What the ePub version of Starvation Cheap does is get its foot in the metaphorical door of my reading list so I can skim it and make the decision to read more.

I’m still not sure I’ll ever use this for a campaign, but it’s been a joy to read. I could probably still use a lot of the tools to generate material for one-shots for convention play.