Just recently I found this site cataloging the Premier and Nouvelle Editions of the French Hawkmoon RPG. The links to Oriflam and other places are long dead, and it’s a shame that the graphics aren’t bigger but you can see that the French line was extensive — while not much became of the English language RPG until Hawkmoon was picked up by Mongoose around 2008 (whose translation constitutes the French 3rd edition, I think). 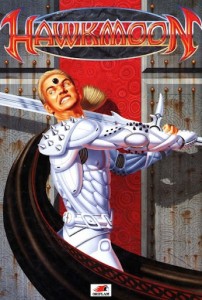 It took the French to keep Hawkmoon alive with its European heroes and Granbretan as the big bad. If only the Cornish nationalists had pulled their finger out we might have a line of Corum games somewhere. Although I can’t read Cornish.

Hawkmoon probably doesn’t qualify as Dying Earth although it has many of the trappings in common with Vance (and Wolfe, and Harrison) — a weird fantasy landscape, ancient technology as sorcery, regression to medievalism and feudalism, etc. I think this is important to bear in mind for this kind of setting where nods to a past Earth are dotted around like Easter eggs. Without it the whole thing degenerates into a weak sub-Tolkien fantasy of warring medieval nations.

In the mid-80s the genre wasn’t particularly well exploited in RPGs — there was enough post-apocalyptic stuff with Gamma World, After the Bomb and arguably Paranoia, but the only explicitly future earth settings that come to mind came much later, e.g. GURPS New Sun (1999) and Chronicles of Future Earth (2010). Is Kerie L. Campbell-Robson’s Hawkmoon RPG the first of its type? 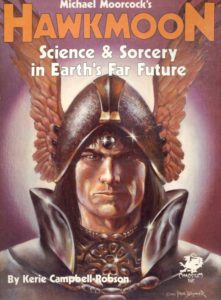 Chaosium’s Hawkmoon came in a box set with 3 books — one for players, one for GM and the Science book. There are maps, and a lovely cover by Frank Brunner.

Much like Stormbringer, Hawkmoon’s treatment of Tragic Europe’s locations is terse and mostly confined to the Character Generation chapter of the Player’s guide. Aside from the map the rest of that booklet is skills, combat, injuries and other fairly generic stuff. Likewise the GM’s booklet is just two scenarios plus a beastiary. The Science booklet is the most interesting with a fictional timeline — which I think is wholly created by the RPG authors — that places the end of the Runestaff chronicles around 5304 CE. There’s a section on technology and artifacts, one on animal and plant mutations, and a final piece on interdimensional travel. Actual “magic” or science that the players can manipulate is conspicuous by its absence. Even the sorcerer-scientists, Granbretan’s Order of the Serpent, only get the briefest mention.

System-wise this is pretty much identical to Stormbringer first edition — but without magic, demons, or any system for tracking affiliation to Law and Chaos. It’s definitely my favourite iteration of BRP, particularly with the grouping of skills.

If Campbell-Robson’s Hawkmoon was sparse, Gareth Hanrahan’s offering for Mongoose goes in the opposite direction. At nearly 30 pages the gazeteer of Tragic Europe is thorough but a lot of it is dull, plodding stuff. Here and there the writing threatens to inject some colour, such as the boxed-text description of “wormwoods”:

That is not to say, of course, that wormwoods are empty – quite the opposite. They writhe with unnatural, twisted life. Trees drip bulbous green-glowing maggots and scream at the dawn;three-headed wolves hunt through the undergrowth, pushing through strange poisonous plants that shiver a thousand colours down their leaves and spit venom when disturbed. Mutant barbarians and mechanical things lurk in the shadow of the wormwoods; they are not good places to go.
The eldest wormwood is said to be in Muscovia, where they call it by its native name of Kernobul.

Yeah! That sounds great, let’s go wonder around some wormwoods, fight three-headed wolves and plunder the ancient tombs of mechanoids. Except… wormwoods are hardly mentioned again throughout the supplements (there’s three instances in passing in Hanrahan and Steele’s Granbretan, nothing in the linked adventures in Secrets of Tragic Europe).

Obviously Hanrahan appropriated and injected a few extra bits here and there; the wilds of Tragic Europe sounds more like the toxic marshes of M. John Harrison’s Viriconium, and I like that — but if Hanrahan’s Tragic Europe is going to be toxic and dangerous, where is that content in the Adventuring chapter? Where are my rules for toxic environments and ancient mechanical traps?

My second gripe about the core book is Science and Sorcery. This system has been lifted almost wholesale from the Sorcery rules from RQIII (and I presume MRQ1) so include all the effects like Intensity, Duration, etc. So far, OK. I can even forgive the generic spell descriptions like Damage Boosting, Cast Back, and so forth, which have been lifted directly from RuneQuest. What spoils things is the “requirements” for the spells which include workbenches and laboratories — a perfect fit for sorcerer-science, but totally incongruous with the point-and-click of RuneQuest magic spells. Casting a spell like Acid requires a workbench — a restriction which would seem to make the other restrictions (range Touch, casting time 5 minutes) totally irrelevant. It’s an incoherent union of system and setting.

The rest of the book is about skills, adventuring sub-systems (falling, sneaking, etc.), combat, and some statted-up Moorcock personalities, and a brief synopsis of the fiction; and since I own a lot of BRP material and a lot of Moorcock, I don’t really need either. And system-wise this is the iteration of RQ/BRP I like least.

Mongoose Hawkmoon is a plodding mess that completely drops the ball — in representing the source material, in presenting a compelling setting to play in, and in presenting a coherent system. Its one saving grace are the 2 pages at the beginning which discuss several kinds of parties and adventures (a Lord and Retinue, Mercenaries, Agents at Court, etc.).

Now the supplements are much, much better — Granbretan is both more useful and more fun to read, with spells that actually make sense, biological weapons, and a summary of Granbretan’s campaign in Europe. But then a company which releases a weak and incomplete core rulebook doesn’t deserve loyalty from customers for the rest of the game line. All of this is moot of course since there will be no more EC products from Mongoose. Still if you’re buying secondhand I’d say the core book is for completists only.

What a disappointment. Chaosium’s product is too sparse, Mongoose’s is too long-winded, and both understate the most important aspects of the setting — Granbretan as the villain, mad science-sorcery, weird yet familiar landscapes. Mongoose’s version does have some quality writing in the supplements — and I’m guessing that Hanrahan did much better when he wasn’t obliged to incorporate the MRQ1 SRD in the middle of his book.

Given that neither system is complete as far as doing the sorcery-science, these are the alternatives for running Hawkmoon:

« No, YOU get off MY lawn
The Revised Elric of R’lyeh »